This question have been driving me crazy for months now. This comes from work on multiple integrals and convolutions but is phrased in terms of formal power series.

We start with a formal power series

I'm then interested in the formal power series $P_T(C)=\frac{P}{1-P}$ as well as, if possible, the series $P^n$ for arbitrary positive integer n (where this is the power series P raised to the nth power).

then want to construct the function

which, from other results, should converge for all x. We can think of this as the doubly-exponential generating function for the $b_n$ sequence.

There are rules for multiplying and dividing formal power series (see here) and I've used these to get a recurrence relation for the coefficients in $P_T(C)$ (as well as P^n(C)) but I've been unable to solve these recurrence relations explicitly. They're in a form where each $b_n$ depends on all the previous $b_n$'s and I've not been able to make progress with them.

The question is, is it possible to figure out the function $f(x)$!? Does it have a nice closed form? Perhaps in the form of a hypergeometric function? If it does, great, if it doesn't then at least I can stop searching for it!

[update] remark: I shifted the original answer to the bottom although it was missing the question to keep it as reference.
I've done a nice table, which shows the coefficients of a powerseries with constant term =1; for any p 'th integer power of the function you insert p into the formula.
Unfortunately the Latex-notation of the table was too messy, so I insert it as an image here: 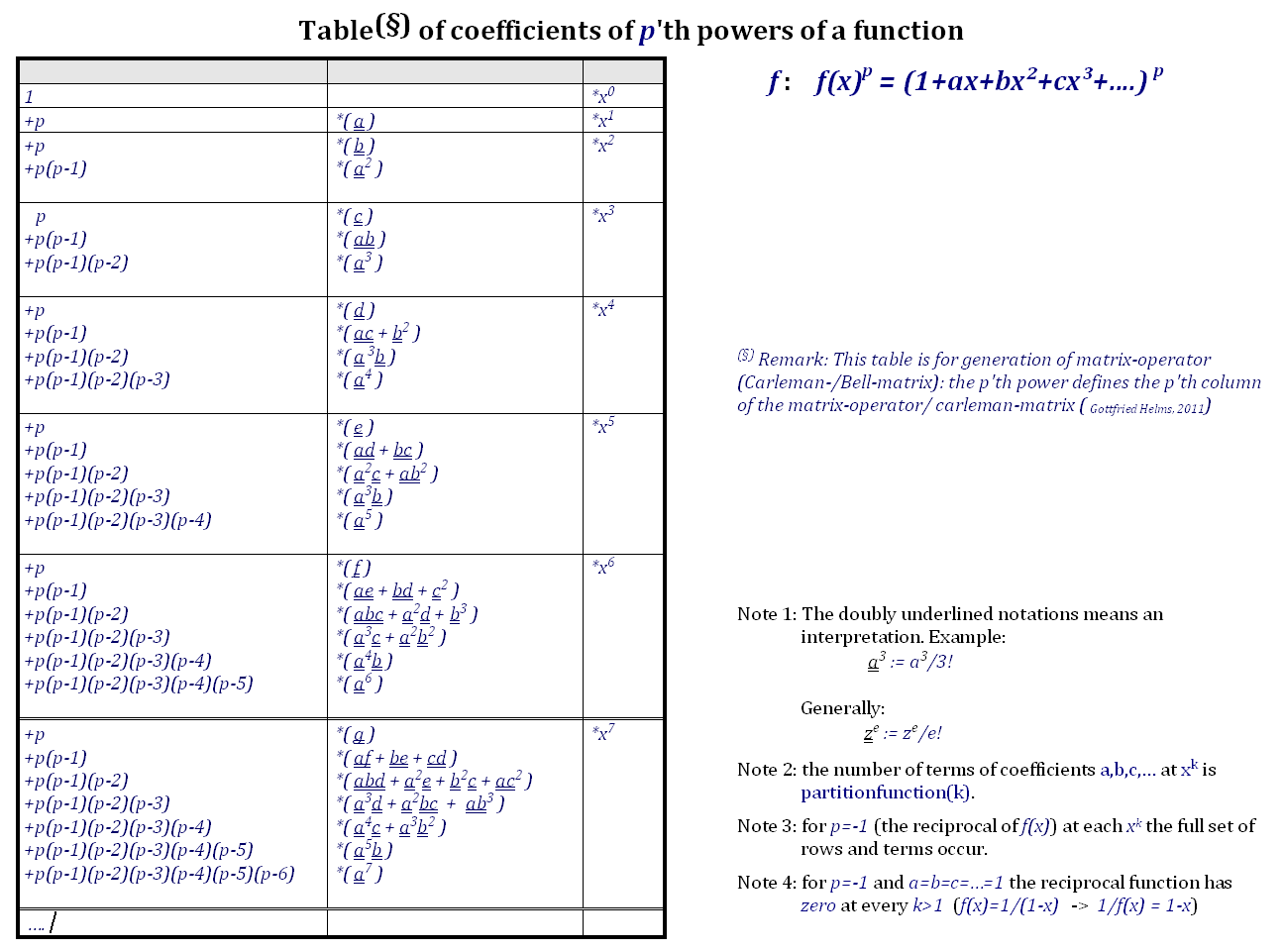 If you have Pari/GP you can easily manipulate power series; the formula $ \small P \cdot (1 - P)^{-1}$, where P is defined to be a powerseries can directly be evaluated :

The matrix-operator is simply the coefficients of each power of the taylor series of a function in a column of an (ideally infinite sized) matrix.

I was not yet able to construct the other function $ \small P_T(C)$ although I've tried with a certain vague idea; please show some of the coefficents $ \small b_n $ so that I can compare.

I stumbled across a similar question on math overflow here. That had lot of insights into P including a simple continued fraction expression for P. Details in a paper here.

This surely means that

Perhaps written like this maybe it is simple enough to have a nice solution. Maybe?