Imagine a smooth curve $c$ sweeping out a unit-radius disk that is orthogonal to the curve at every point. Call the result a tube. I want to restrict the radius of curvature of $c$ to be at most 1. I am interested in the behavior of a light ray aimed directly down the central axis of one end of the tube, as it bounces with perfect reflection from the interior wall of the tube. This could be viewed as a model of an optic fiber, although I want to treat the light ray as a billiard ball and not a dispersing wave.

Q1. Does the light ray always emerge from the other end?

I believe the answer is Yes, although there can be close calls:

I would be interested in a succinct, convincing proof (or a counterexample!). Perhaps I should stipulate that if the ray hits a boundary singularity (as it nearly does above), it dies; otherwise it could pass through the center of curvature and reflect to its own reversal.

I explored one particular, maximally convoluted, snake-like tube, composed of alternating semicircles of radius 2 (so the central curve $c$ has curvature 1):

The lightray behaves seemingly chaotically, although when I look at the angles the rays make with the $(+x)$-axis, there is a striking distribution. Here is a histogram for a tube composed of 1000 semicircles:

Q2. Can you offer an explanation for the observed distribution of ray orientations? Why is the angle $\pm 17^\circ$ so prominent, and there are no ray angles whose absolute value lies within $[19^\circ,111^\circ]$? There are approximately 1.55 ray bounces per semicircle: Why? Is this approaching $\frac{3}{2}$? Or $\frac{\pi}{2}$?

Q2 Answer: Dimitri Panov's remarks and the phase portrait below show that likely the ray trajectory is quasiperiodic, which explains the angle histogram, which is, in a sense, a projection of the phase portrait.

Edited 1. Some suggestions are added at the end concerning Q2.

Q1 I think that the answer to Q1 is positive provided the boundary of the tube is smooth. I'll consider the case of dimension $2$.

So, by our assumptions the light is propagating in the strip bounded by two smooth curves $L_+$ and $L_-$ that are both equidistant from the central curve $L$ on distance $\frac{1}{2}$. It is important that the whole strip is foliated by unit intervals orthogonal to all three curves, we call this foliation $F$.

Now consider our ray of light $R(t)$ propagating in the strip and introduce a function $\angle(t)$ that equals the angle between $R(t)$ and the orthogonal to $F$ in the direction of the tube. On the entrance of the tube the angle equals $0$.

Proof. Indeed, suppose that at some time $\angle(t)=\frac{\pi}{2}$. This means that $R(t)$ at this time goes in the direction of the foliation $F$. But since any segment of $F$ is a periodic ray in the strip, $R(t)$ must coincide with the segment, which is an absurd. END.

So, we see now that $R(t)$ will always propagate in the strip in one direction. So the only possibility for the ray to stay forever in the strip is to accumulate at some point to a segment $F_0$ of the foliation $F$. Let me explain why this is impossible. The main idea is that this is impossible in the case the curve $L$ is a circle of radius $r>1$. In this case it is easy to check the statement. The statement for general $L$ roughly follows from the fact that $L$ can be approximated well by the circle at any point.

To spell out the above in more details we can reduce the question to a question of billiards. Indeed, on the two-dimensional set of straight directed segments that join $L_+$ with $L_-$ there is a (partially defined) self map, consisting of two consequent reflection of the segment (first with respect $L_-$ then with respect to $L_+$). All the segments of $F$ are fixed points of the map. We need to show that for $F_0$ there is no a point that tends to it under the infinite iterations of the map. This self-map have three properties: 1) it preserves an area form 2) it fixes a segment (parametrizing the segments of $F$) 3) its linearisation is never identical on the fixed segment.

These 3 properties are sufficient to deduce that everything roughly boils down to the following exercise:

Q2 This is more of a suggestion rather than an answer. But this suggestion might help to get some clues to the answer. I would suggest you to make one more picture, namely, the picture of the Phase portrait - standard thing one does when dealing with a billiard. So, one only needs to consider the trajectory and for each reflection of the trajectory from the upper curve plot the point with two coordinates:

If you plot 1500 points, a certain shape will appear. Probably the points will fill a two-dimensional domain, but according to the histogram, the trajectory will avoid a large part of the phase portrait. This just reflects the fact that this billiard is not ergodic. I think, that to understand why there are no rays with angles in $[19^0, 111^0]$ one should analyse the boundary of the shape that will appear. This boundary might correspond to some "quasi-periodic" trajectory(ies) of the billiard.

Further on Q2. I want to add a couple of remarks on Q2, that are rather superficial. So, from the experiment of Joseph we see that with some probability it turns out that the original trajectory is quasi-periodic. I.e. the segments constituting the trajectory land on a one-dimensional curve in the 2-dimensional space of all segments. This at least explains the appearance of spikes in the first histogram. Indeed, when you project a measure evenly distributed on a curve on a plane to the $x$ axes - the projected measure will have singularities at points where the vertical lines $x=const$ are tangent to the curve.

Now, I guess, that in order to really answer the question one can indeed try to prove that the initial trajectory is quasi-periodic. The billiard is rather simple of course, but I don't know how hard it will be. And before you prove this, you can not be sure that the trajectory is really quasi periodic...

Q1. No. The projection of the ray to the curve $c(t)$ has to be monotonic. In particular, no ray can come back, but some ray might stay in the tube forever.

Construction. The curve and ray will be flat. The curve has countable number of slight turnes left-right-left-right..., so the ray approach a direction tangent to one of the discs. Imagine that you fly on the ray and construct (flat) curve at the same time; the curve should turn left when ray goes from left to right wall and vice versa. (This way the angle between ray and the disc decrease roughly as integral of absolute value of curvature of the curve.) The total length of such curve can be made finite; after that you can continue by anything you want.

Comments. It is possible to keep the curvatue of $c$ in such example arbitray close to zero. One can make it to be twice differentiable, but it seems impossible to make it $C^{2,\varepsilon}$ for any $\varepsilon>0$. Dmitri's answer gives a reason why.

Here is my interpretation of Anton's idea to capture the ray. I found it almost impossible to illustrate; I could only show three sections of the tube, separated by two rotations, the first counterclockwise the second clockwise. (The actual turn angles I selected are irrelevant.)

Here is the phase portrait of $(\theta, x \; \mathrm{mod} \; 2)$ for the rays that Dimitri suggested in his response to Q2 (if I have interpreted his suggestion correctly), using the same data as displayed in the histogram: Following Dimitri's second suggestion in the comment below, I shot the ray off at a random start angle, e.g.:

Here are the phase portraits of 20 different random rays, with initial angles $\theta_0$ chosen uniformly within $(-\pi/2,\pi/2)$, each reflected through a tube of 200 semicircles. Each ray's phase trajectory is in a different color. The conventions are the same as in the phase portrait above (which corresponds to $\theta_0=0$). (Note: The number of ray reflections is not held constant, but rather the length of the tube is fixed, and the ray bounces until it exits.) I believe some of the prominently dark bands are caused by $\theta_0 \approx -\pi/2$, when the ray essentially skims around semicircle 1 and then shoots off nearly vertical to hit semicircle 2, and then it again nearly follows semicircle 3, and so on. You can see a hint of this behavior in the $\theta_0=-75^\circ$ example above.
Share
Improve this answer
edited Mar 10, 2017 at 9:42

I would like to add one more piece of information and some pictures concerning the snake like tube. All this was communicated to me by Peter Panov.

The picture below shows one particular trajectory in the billiard. 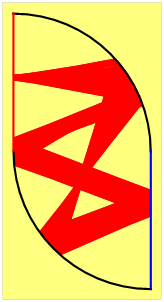 Every trajectory of a light ray inside the tube can be obtained by "developing" the corresponding trajectory in the billiard.

The picture below shows one particular trajectory in the phase space.

The next picture shows the full phase portrait.

Just a guess .. tend to think that all (in laser-like beam) rays entering the torus:

when the infinitesimal arcs of geodesics are replaced by finite segments of tube. Assuming as per sketch $ \pi c>a$ to avoid re-entry of beam after one turn of spiral tube.

Not the answer you're looking for? Browse other questions tagged mg.metric-geometry geometry ds.dynamical-systems billiards or ask your own question.

39
3D Billiards problem inside a torus
42
Can we trap light in a polygonal room?
6
Sliding through a curvature-bounded tube: Maximum volume?
1
Trapping lightrays under nonstandard reflections and/or paths

6
Light rays bouncing around inside a sphere in d-dimensions
23
Trapped rays bouncing between two convex bodies
5
Geodesic rays and horofunctions
30
Optic fibers after Joseph O'Rourke
22
Non-chaotic bouncing-ball curves
9
Billiard dynamics with angle of reflection a fraction of angle of incidence
20
Reflection of light from function graph
8
Ball ricochetting from a plane of close-packed spheres
6
Sliding through a curvature-bounded tube: Maximum volume?
Question feed