Map from simplex to itself that preserves sub-simplices

I believe this may be a standard algebraic topology problem, so I apologize in advance if this belongs in stackexchange (it's not a homework problem, however, and came about in a research context). I've got a continuous map $f$ from the $n$-simplex to itself, such that the image of every strict sub-simplex is itself. So, each vertex gets mapped to itself, as does each edge, and so on and so forth. Does it follow that $f$ must be surjective?

Given such a map $f:\Delta_n\to\Delta_n$, put $f_t(x)=(1-t)x+t f(x)$. This gives a homotopy between $f$ and the identity, and each map $f_t$ also sends every subsimplex to itself. In particular, each $f_t$ preserves $\partial(\Delta_n)$ and so induces a self-map $\overline{f}_t$ of the space $\Delta_n/\partial(\Delta_n)\simeq S^n$. It follows that $\overline{f}$ is homotopic to the identity, and so is not homotopic to a constant map. This means that $\overline{f}$ must be surjective (because any non-surjective map factors through a space $S^n\setminus\{a\}$, which is homeomorphic to $\mathbb{R}^n$ and so contractible). As $\Delta_n\setminus\partial(\Delta_n)$ is dense in $\Delta_n$, it follows that $f$ itself is also surjective.

Neil Strickland's answer is very nice. Let me add a slightly different answer, which might be useful in a similar situations, when a homotopy can't be given as easily.

Recently, in search for an early reference for this statement I came across this 2009 preprint by Roman Karasev: KKM-type theorems for products of simplices and cutting sets and measures by straight lines.

It has the statement as Lemma 1: 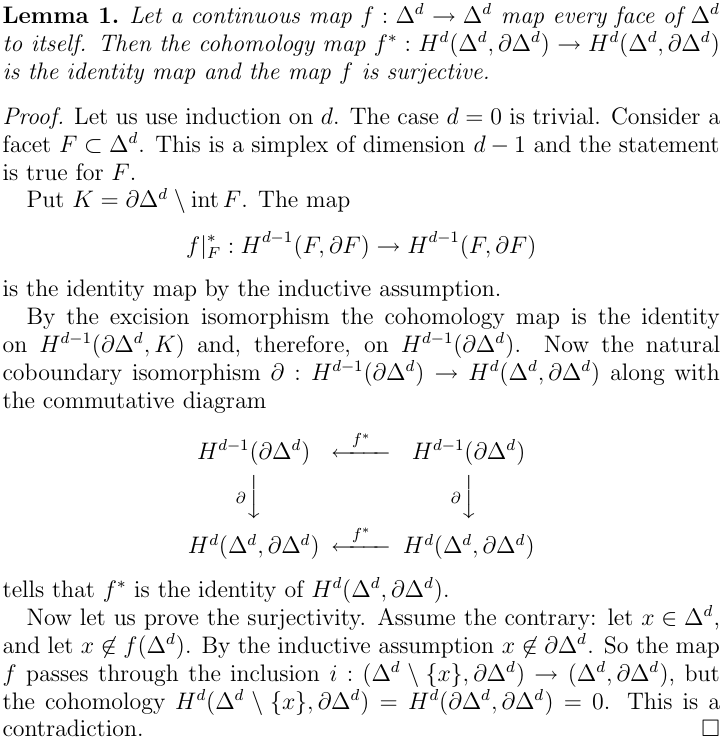 In the following pdf, also by Karasev: Geometry of measures: partitions and convex bodies, 2013, the statement appears as Lemma 9.2. There is a proof, very simliar to my other answer (and to the proof in the preprint from 2009): 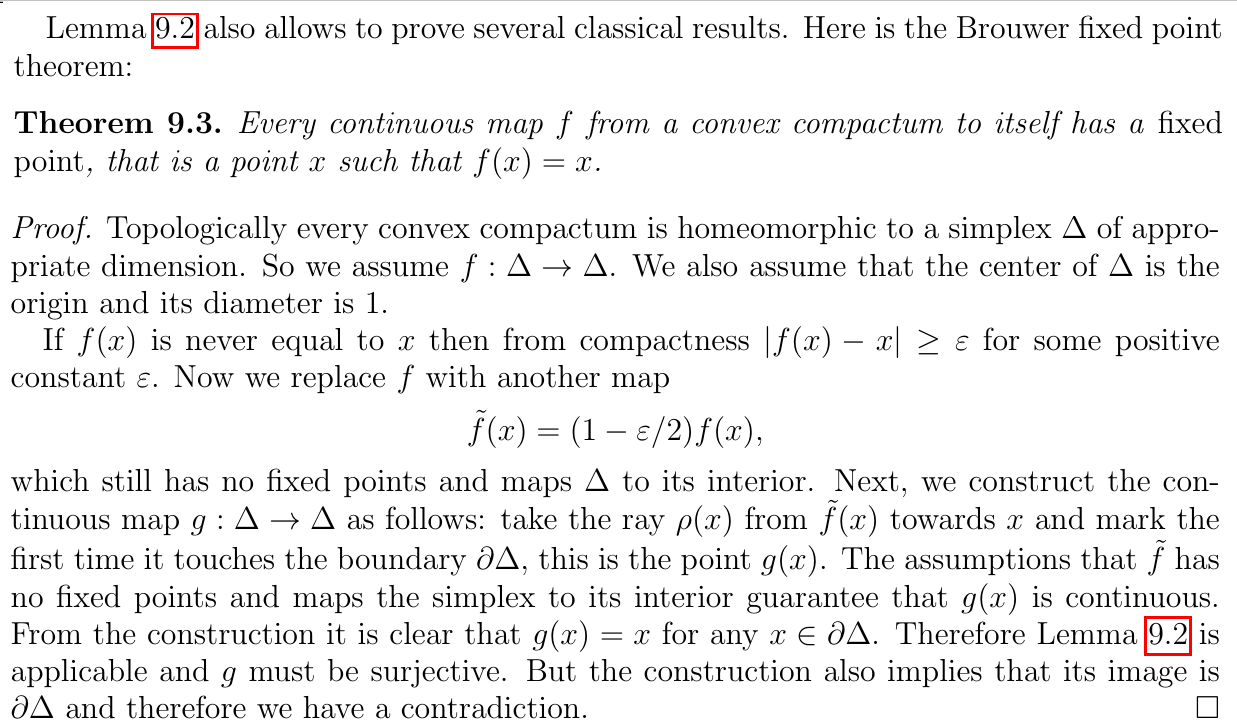 I wonder whether 2009 is the first time this Lemma was written down somewhere, my feeling is that it should have been used by somebody before that time.

Not the answer you're looking for? Browse other questions tagged at.algebraic-topology gn.general-topology or ask your own question.

26
Proving that a function's image contains (1/n,…,1/n)
2
Choosing the weights of a Voronoi diagram — is this function always the gradient of another function?
3
On a generalization of the Borsuk-Ulam theorem / Tucker's lemma for a map from simplex to its boundary

7
What information can one recover from the induced map on homology?
3
Characterizing space that preserves positive-definiteness property
7
Does there exist a homotopy equivalence from $\mathbb{C}P^{2n}$ to itself that reverses orientation?
2
Removing simplices from simplicial complexes without decreasing connectedness
3
A question on continuous maps from Möbius to itself
34
Does there exist a continuous 2-to-1 function from the sphere to itself?
3
Continuous map on the simplex (applicable to fair division)
Question feed