I was looking at some random problems and questions I liked when I was in high school and I found this one which I still cannot prove.

Does there exist a configuration of a countable number of straight lines in the plane such that:

1) no two are parallel

2) no three are concurrent

The answer is certainly no, but it is not that easy to prove. Any ideas?

I can sketch a proof based on assuming this "finite" result:

A). For any pentagonal star one of the 5 triangles will have area strictly smaller than that of the central pentagon. (I think a brute force attack should yield a proof here.) 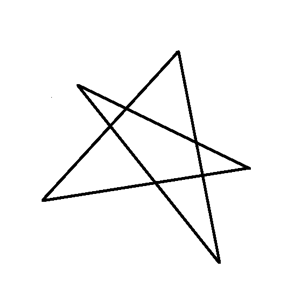 The proof of the original problem would then go as follows.

b). A) generalizes to n-agons by considering the pentagon spanned by any 5 vertices. 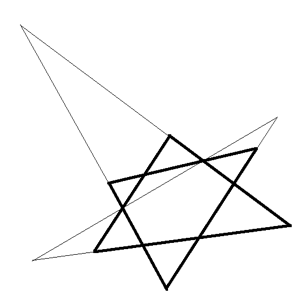 c). b) implies that a tiling with polygons of EQUAL AREA is not possible unless all polygons are either triangles or quadrilaterals.

d). Take one 4-tile and continue tiling next to it inside the cone enclosed by the converging lines of 2 opposite edges; we have a sequence of quadrilaterals which must end with a triangle were the the 2 lines meet. This shows that the tiling must contain a 3-tile somewhere. 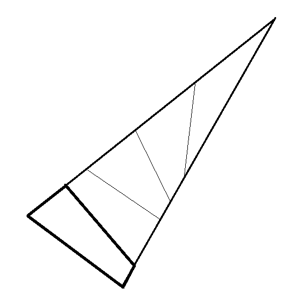 e). By d) take a 3-tile and continue tiling outwards, inside each of the 3 beams generated by the lines of each pair of edges; the original 3-tile will be the first tile in each beam, but every other tile after it must be a 4-tile (build them one at a time and keep using c)). We can ignore what happens in the 3 leftover cones radiating from the 3 vertices. 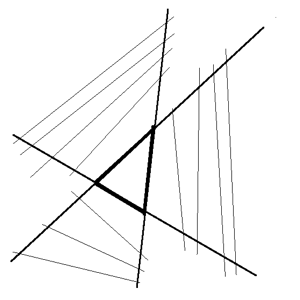 f). In one of the 3 beams (which now look like ladders) take any one of the new rungs from step e) and extend it - that line will then collide with one of the other 2 beams (but cannot overlap with any of its rungs). That will cut one of the 4-tiles, creating a 5-tile. 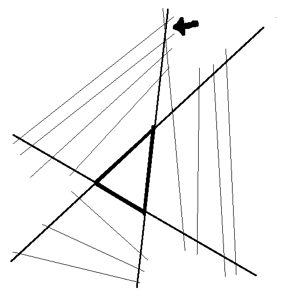 Apologies for bumping up the question repeatedly while trying to edit my answer.

Not the answer you're looking for? Browse other questions tagged discrete-geometry or ask your own question.

1
How does one map regression depth to undirected depth of a point?
7
Erdős-Szekeres empty pseudoconvex $k$-gons
14
Can a tangle of arcs interlock?
4
Orchard-planting problem in space
5
On 'fair bisectors' of planar convex regions
5
On folding a polygonal sheet
8
Counting polygons in arrangements
Question feed