Abel summation of the alternating series of primes?

Consider the ordinary generating function of the sequence of primes ($2+3x+5x^2+7x^3 + ...$); by the ratio test and the prime number theorem, its radius of convergence is $1$. Thus, we might well ask about the limit of its value as $x$ approaches $-1$ from above (i.e., about the Abel summation of the alternating series of primes $2 - 3 + 5 - 7 + ...$). So I do! Is this limit well-defined? Is it finite? If so, what is known about its value? (I pessimistically suspect I will be told it is actually disappointingly infinite, or even worse, that the limit diverges by oscillation, but I haven't enough experience in this sort of thing to confidently rule out more interesting possibilities...)

[I realize the alternating series of primes has partial sums with arbitrarily large magnitudes, by the existence of arbitrarily large prime gaps, so there's no hope for it to be convergent in the standard sense...]

with E in a resulting vector T, which contains then the sequence of the Eulerian-transforms

as instance of an "Eulerian transformation" (as different to the other name of "Euler-transformation" which uses the pascal matrix instead). Finally the sum of the entries in T is the acceptable value for the alternating sum of the primes under "Eulerian summation", if this sum converges. We want finally write, using the lower triangular matrix of ones D for the partial sums in the vector S :

and if the sequence of entries in S converges, then $s =\lim_{n\to \infty} s_n $ will be our limit for the alternating sum of primes.

Because of the reciprocal factorial which is involved in the dotproducts, because of the little growth rate of the sequence of prime numbers and because of the simple composition of the eulerian numbers each of that columnwise dotproduct occurring in the multiplication $X *E$ is convergent, so each entry in T is well defined. Here are the first couple entries of T:

and the partial sums from T show a nicer behave than that of the sequence of alternating signed primes. However, this is still not conclusive - maybe with some more terms (I computed this up to n=127) one can give a more conclusive result. Here is a plot of the entries in T 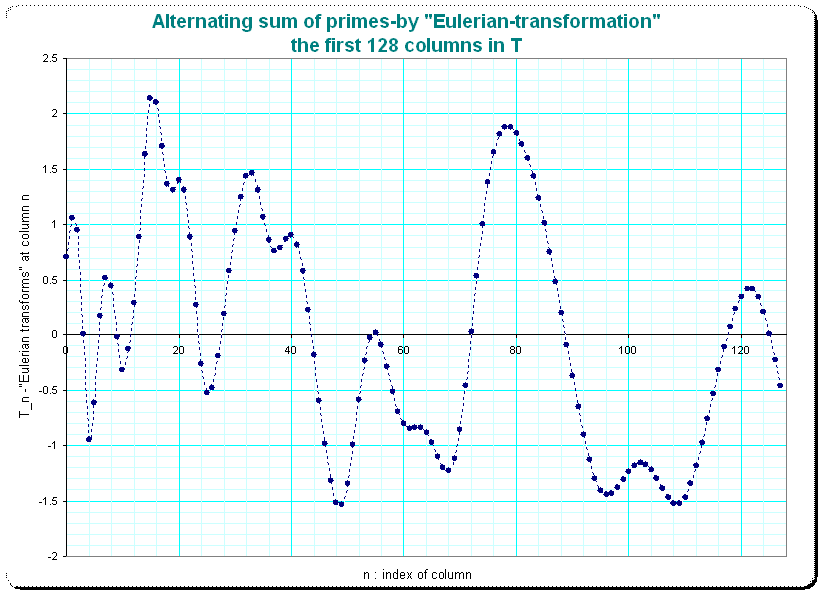 It impresses me, that this Eulerian transforms are all of small absolute value, and this let's me hope, that we might be on the right track here. On the other hand, in the following plot of the partial sums, the (directly summed) partial sums still show oscillating behave (its summands still having alternating signs), so I've also included three variants using additional Eulersums of small orders (0.2,1 and 2) to hopefully flatten that oscillating curves down to convergence. 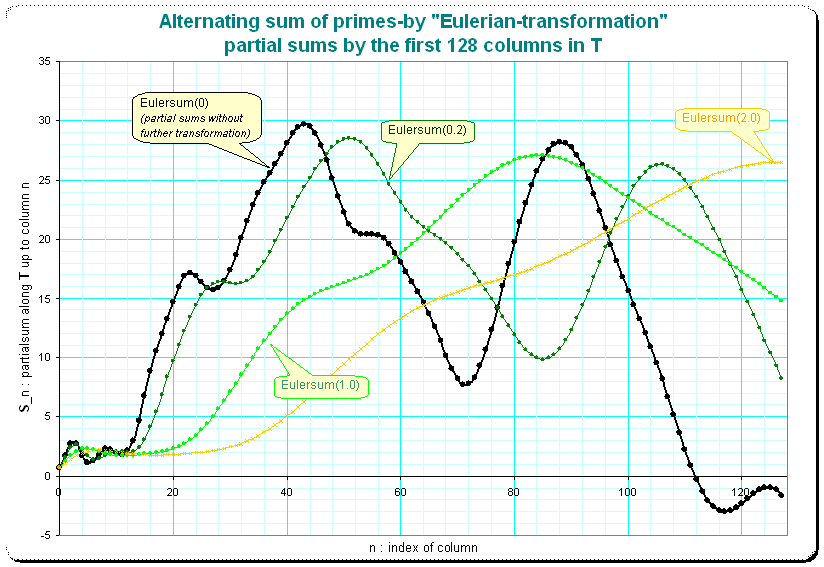 However these Eulersums still does not suffice to arrive at a convergent sequence of partial sums - at least not with 128 terms only, perhaps we should look up to 256 terms or more.

[update]: After optimizing the procedures I've got the first 256 partial sums of the T-vector: 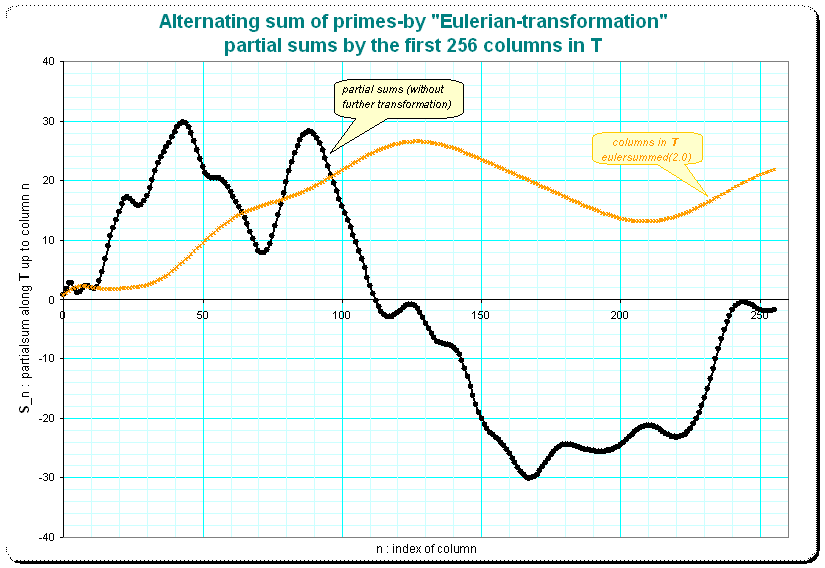 (Well, from the pictures I begin to suspect that we need still another method, possibly fourier-series or even a completely different approach.)

[update]: to answer on Greg's comment I compared the profile of partial sums of that summation using the Eulerian numbers and that of the common, ordinary Euler-summation. Surprise: the profile is nearly identical, only that the method using Eulerian summation arrives at the same profile using only the forth part of coefficients: 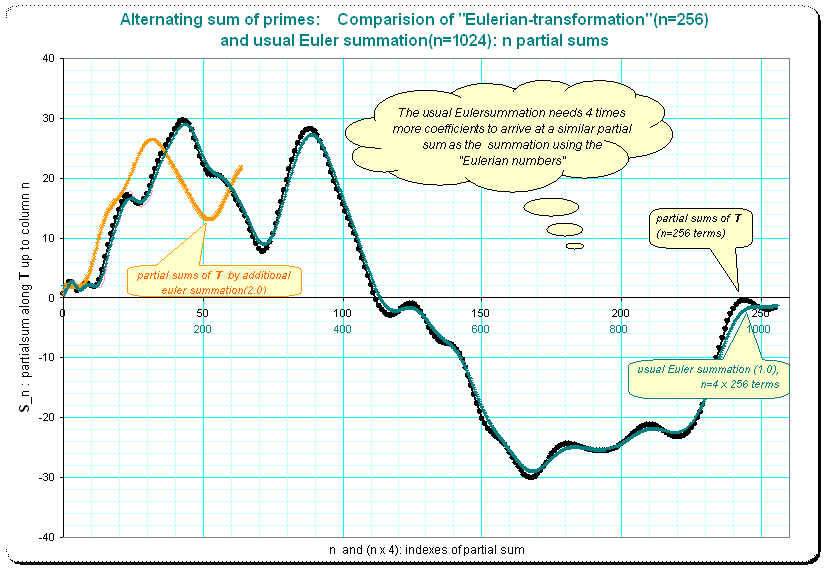 Not the answer you're looking for? Browse other questions tagged nt.number-theory divergent-series prime-numbers or ask your own question.