Edited - some comments may now be out-of-date.

I thought I had a complete set of solutions to this:

It became clear after some discussions that I was very, very wrong.

There are infinite families of solutions, and a sporadic. So I have two questions:

You can take any of a variety of paths from the center to the edges:

There are various ways to draw a a path from one vertex of a small square to the opposite one and get two symmetric pieces (although one can't just use horizontal and vertical segments). Then 4 of those little squares yield a dissection into 8 pieces.

Later addition Under more relaxed conditions, here is an example with 32 pieces (and a suggestion that maybe there is no limit) . If you look at it the right way you might be able to convince yourself that each piece is path-wise connected. The 4 colored pieces are congruent by rotation around the center of the area shown (which is a quarter of the full square). Using a reflection will give 4 more pieces for a total of eight. These eight pieces (so far) fit together to fill in the square shown and each touches each corner. Put together 4 copies of this (32 pieces total) to get the full square. 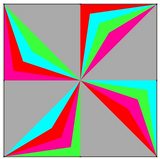 As it is, each piece in the full square touches one corner and the center. I have not totally convinced myself, but it seems that it should be possible to divide each piece into 4 by quadrisecting each acute angle and then recolor in such a way as to have all 32 pieces each touching all 4 corners. If so, then 4 copies of that figure could be arranged and give a square partitioned into 132 pieces all touching its center. If that is correct then there should be no limit.

1) If you want respect on this site then stop hinting that you have a perhaps complete classification with three families plus one sporadic (I don't mind that but some people here do). Describe them carefully enough that people can decide if they have others that they can think of. Is the sporadic case the entire square? I gather that you think every solution uses 1,2,4 or 8 pieces. I imagine that is true but the proof of that alone would be a good start and might not be that easy (see comment 3 below.)

2) Your description would probably make clear what you mean by piece, but the most general definition commonly seen (although I have now used a looser definition above) might be something like : "a closed topological disk in the plane with boundary a simple closed curve." You wish to find a finite set of such pieces, all congruent (reflection allowed), disjoint interiors, union the square and the center on the boundary of each piece (ignoring the one piece case...). Tedious, but worth saying anyway. For reference below: a polyomino is such a tile made of unit squares meeting edge to edge.

3) It is fun and challenging to find a missed example for claims of the sort: "this is all tilings." It can be surprisingly difficult (compared to the "obviousness" of the result) and rather tedious (to my taste) to prove that there are not any exceptions. Here is a 7 page paper discussing when you can split a polygon into 2 congruent shapes:

Splitting a Polygon into Two Congruent Pieces Kimmo Eriksson The American Mathematical Monthly Vol. 103, No. 5 (May, 1996), pp. 393-400 It might be relevant for this problem and at least is an example of how to prove such things.

I can believe that the only way to partition a rectangle into 3 congruent pieces is if the pieces are themselves rectangles. Here is an 8 page proof:

It cites the following classic (to those who follow these matters) 6 page note proving a long conjectured result (again the methods in the paper could be relevant):

Abstract: The order of a polyomino is the minimum number of congruent copies that can tile a rectangle. It is an open question whether any polyomino can have an odd order greater than one. Klarner has conjectured that no polyomino of order three exists. We prove Klarner's conjecture by showing that if three congruent copies of a polyomino tile a rectangle then the polyomino itself is rectangular. The proof uses simple observations about the topology of a hypothetical tiling, and symmetry arguments play a key role.

I think there are very few such solutions. The pieces must be identical, and they must touch the center. Consider the segment joining the center with one of the vertices. Then all small figures (in which you split the square) must contain a segment of this length, and there are only four such segments. Any such segment belongs to at most two small figures, and we find that there are at most $8$ small figures. From here on it is easy to see that the possible splits are:

There are indeed many solutions. Sorry for my initial remark. I think that essentially the square can be dissected in 2,4 or 8 parts. The 8 parts is unique. The 2 parts cutting must be symmetric by its center, and the 4 parts cutting must be made such that is invariant by a $\pi/2$ rotation.

The number of solutions is the maximal possible, namely $2^{2^{\aleph_0}}$. But we need to be specific about some definitions. To begin, what does it mean to cut into identical pieces? There seems to be agreement on this point that it means to partition the square into finitely many pieces each of which can be rotated into the other. The other definition I will assume is that "touching the center point" means having that point in the closure of each set. We also need to assume that we actually have a partition of the square minus the centre point, because otherwise there is no solution except for the square itself because the centre point can belong to only one member of the partition.

Not the answer you're looking for? Browse other questions tagged plane-geometry enumerative-combinatorics or ask your own question.

2
fit 4 circles within a square
12
Generalizing square wheels rolling on inverted catenaries
12
Probability that random cubic polynomials meet in a square
11
What is the area of the biggest open convex set inside the unit square not containing k points?
6
A path in the unit square that "doubles back" on itself in a nice way
3
Cutting a square into an infinite number of triangles constrained by two rules
6
Sufficient conditions for the coefficients of a generating function to dominate those of its square
4
Enumerating all permutations that are "square roots" of derangements
5
On circles and ellipses drawn on an infinite planar square lattice
Question feed