The analyses in two recent MO questions ("recent" with respect to the original posting in 2011), "Rolling a random walk on a sphere" and "Maneuvering with limited moves on $S^2$," suggest a Rolling-Ball Game, as follows.

A unit-radius ball sits on a grid point of a $\delta \times \delta$ regular grid in the plane, with $\delta \neq \pi/2$. Player 1 (Blue) rolls the ball to an adjacent grid point, and the track of the ball-plane contact point is drawn on the ball's surface. Player 2 (Red) rolls to an adjacent grid point. The two players alternate until each possible next move would cause the trace-path to touch itself, at which stage the player who last moved wins. In the following example, Red wins, as Blue cannot move without the path self-intersecting. 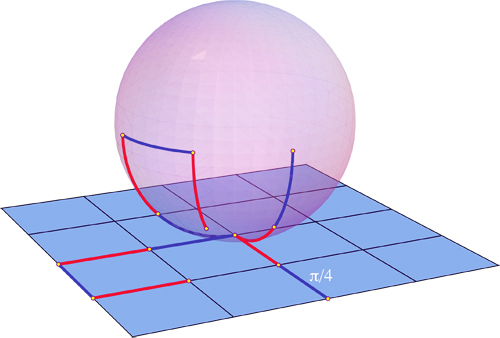 Q1. What is the shortest possible game, assuming the players cooperate to end it as quickly as possible? For $\delta=\pi/4$, the above example suggests 6, but this min depends on $\delta$. It seems smaller $\delta$ need 8 moves to create a cul-de-sac?

Q2. What is the longest possible game, assuming the players cooperate to extend it as much as possible?

Q3. Is there any reasonable strategy if the players are truly competing (as opposed to cooperating)?

The right image just shows a non-intersecting path of no particular significance for $\delta=\pi/8$.

The game is, indeed, finite though the reason I see is slightly different. I claim that if $L$ is a sufficiently long piece of a fixed shape and $R$ is a rotation sufficiently close to the identity, then $RL$ intersects $L$. This is a combination of three observations:

3) The angle deficiency at each endpoint (if we close the curve somehow) is at most $a$.

The ending is obvious: there are finitely many possible shapes of fixed large length, each piece can have not too many copies (otherwise there are two pieces differing by a small rotation), so the total length is bounded.

For testing potential answers to Q3, let me suggest http://www.math.chalmers.se/~wastlund/Quirks/Game.html.

The appearance as well as the specific set of bugs might depend on your browser, but as I hope will be clear, the length of the longest path as a function of the angle $\delta$ is quite funny (this is part of the reason I spent too much time on this problem, although I'm also interested in similar path-forming games for more "serious" reasons).

Here's why I couldn't let go of this problem: In all the cases where I can visualize the entire game-tree, which is when $\delta\geq \pi/2$,

(1) Alice, who draws the first arc, wins the game-version.

(2) Bob, while losing, can force Alice into a maximal-length path. In other words, Alice cannot force a win in fewer moves than the length of the longest path. This property holds for some similar path-forming games where there are explicit winning strategies.

A couple of other observations: If we allow players to cross their own edges but not the opponent's, then an edge is never a liability, and consequently Alice has a non-losing strategy. If on the other hand we allow players to cross the opponent's edges but not their own, then an extra edge cannot be an advantage, and now Bob has a non-losing strategy (two more questions arise here: are these games too necessarily finite, and can the (winning?) strategies be made explicit rather than just exhibited by strategy-stealing?).

Therefore I thought for a while that I was on to something, and that there might be a beautiful reason that Alice must win.

So I let Maple analyze the game for some suitably chosen angles, working symbolically to get reliable results. This is feasible when $\delta$ is such that the ring $\mathbb{Z}[\cos\delta, \sin\delta]$ where the coordinates of the points lie, is either a sub-ring of $\mathbb{Q}$ or of some nice algebraic field (degree 2 or 4).

Addendum. (by J.O'Rourke). I took the liberty of adding an image of Johan's $\pi/3$ longest path from his applet, as detailed in his comment below. Note the near miss where the 28th segment just misses the 1st segment. 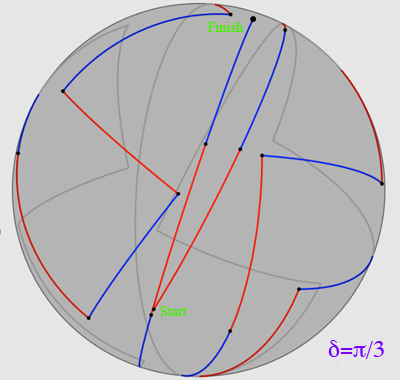 I can show the game is finite which answers one of the questions in the comments and shows the answer to question two is not infinity. The arcs in on the sphere from the rolling are sections of circles of unit radius the angles between the arcs are either 90 or zero. Furthermore there is finite limit to the number of rotations without switching the direction of rotation. So for a large number of rotations there will be a set of arcs with a large number of 90 degree angles. But this will mean a large angle deficiency and an arbitrarily large area but there is a finite limit to the area of subset of the surface of the sphere so there is a contradiction.

Not the answer you're looking for? Browse other questions tagged mg.metric-geometry discrete-geometry combinatorial-game-theory or ask your own question.

25
Who wins this two-player game based on the sandpile model?
7
Game: Avoid the Gaussian primes
9
1..n game, how to analyze?
1
A modified divisor game
12
Sliding blocks puzzle
18
Removing pawns - the game
5
Is it possible to evaluate Connect 4 positions with Combinatorial Game Theory?
3
Game on a string
19
Who wins the Rubik's cube game?
Question feed