Which knots can appear as a space-time cut/slice of an open trefoil?

An open trefoil is a trefoil tied in an infinitely long line. An open trefoil that is at rest in (flat) space is a surface in space-time. Now, other observers in space-time have other time slices/cuts. These slices are unbounded but need not be flat surface; they can be curved, because observers can be accelerating.

Probably, this is an infinite family of knots; but is there a simple way to find out the simplest cases (that is, those with the smallest crossing numbers)?

Thank you a lot for any help.

I think you don't really want to assume that your space-time is flat (both here and in your previous question) because of what Greg and Ryan said. Let me elaborate: in a non-inertial frame the speed of light might be non-constant and so the light cone might be curved, but still its projection onto the simultaneous hyperplane of the observer would be a homeomorphism. ("Simultaneous" from the viewpoint of an inertial observer who sits on the trefoil, and "projection" is along the lines of rest in the frame of that observer.) For that reason even the non-inertial observer would still see just a long trefoil in his light cone.

On the other hand, if you allow curved spacetime, then light cones may bend, but normally they still project homeomorphically onto the "horizontal" hyperspace. Things get more interesting if the observer gets within the event horizon of a black hole. Then his light cone bends beyond the vertical line (=the line of rest in the absence of the black hole). 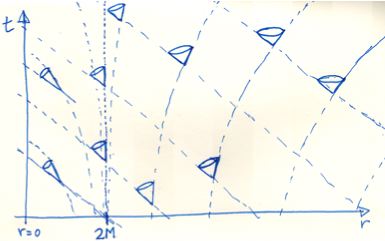 (Note: the picture shows the bending of future light cones.) Then the observer's past light cone is bent enough that it can surely happen to contain the closed knot that is the connected sum of a trefoil with its mirror image. For this to be possible, both the observer and the knotted part of the long trefoil would have to be within the event horizon, the observer being closer to the black hole. (There is an issue then that if the trefoil is a physical rope it will not stay at rest in that position because of the black hole gravity.)

On the other hand, if both the observer and the knotted part of the long trefoil are within the event horizon, but the knot is closer the black hole, then light reflected by the knotted part of the long trefoil would never reach the observer, and he would only see some of the unknotted part. Presumably he could see just a closed unknot, and as the observer is to exchange positions with the trefoil (this is not a physical motion in space-time, but an abstract movie progressing in fifth dimension) he would presumable observe a null-concordance of the closed knot (trefoil)#(reflected trefoil).

One reason why this question might be confusing is that there is a difference between what an observer "sees" using light, and what configuration exists in the simultaneous hyperplane of the observer (which, if I'm not mistaken, is never curved, even if the observer is accelerating, since its definition only uses the first-order frame).

Assuming you are using "sees" to mean the simultaneous hyperplane of the observer, the answer is that the only knot you get is the open trefoil. This is because a boost amounts to a composition of dilations and translations for inertial objects. That is, the knot will seem to be contracted in the direction of travel (and more dense) by the standard relativistic factor of $\gamma$.

If you are asking what sort of configuration of light would hit the observer's retina at a point in spacetime, then you are asking what is the intersection of the observer's past light cone at that point and the worldsheet of the knot (and how that maps to the observer's view). The answer is that you just get your old knot back, but it is distorted. In particular, the configurational difference amounts to a distortion of the celestial sphere that depends only on the relative instantaneous velocity. You will also get redshifting and intensity effects, so if the observer is moving very quickly, a lot of the visible light will be red-shifted or blue-shifted out of visual range.

3
What can one do with randomly generated parameterized knots in 3 space?
6
When is a connected sum of torus knots a slice knot?
5
Surface automorphisms and conformal automorphisms
3
Can a closed trefoil appear as a space-time “cut” of an open trefoil?
8
Torus knots in Euclidean space — a symmetry argument
12
Would a closed universe with special relativity violate causality? Does the universe have to be simply connected?
4
Can distinct open knots correspond to the same closed knot?
5
Are there spaces in which there are no fibered knots?
6
Can one twist fibred knots and still get fibred knots?
4
A combinatorial gadget for smoothly slice knots
Question feed