What are the best results on (Sobolev space) trace theorems for $C^{k,1}$ domains?

For $k=0$, e.g., when the domain is Lipschitz, from e.g. the works of Martin Costabel and Zhonghai Ding, it is known that the trace map is bounded (and has a continuous right inverse) from $H^{s}(\Omega)$ to $H^{s-1/2}(\partial\Omega)$ for $s\in(\frac12,\frac32)$. Moreover the endpoint case $s=\frac32$ is claimed by David Jerison and Carlos Kenig but a proof seems to have not appeared. A part of the question is whether or not the claimed proof appeared. The other part is if there is a proof of the obvious extension of this result to $C^{k,1}$ domains. If so, what is the situation of the corresponding endpoint (i.e., $s=k+\frac32$) result?

Update: Essentially complete answer has been found, and recorded below.

I also believe the Kim paper cited above has the relevant result. On a related matter, there's a very nice paper by Buffa, Costabel and Sheen in J.Math.Anal.Appl. (2002) on trace theorems for H(curl) fields in Lipschitz domains. And Luc Tartar may have the relevant result you seek for part 2 of your question.

Abstract. We prove that the well-known trace theorem for weighted Sobolev spaces holds true under minimal regularity assumptions on the domain. Using this result, we prove the existence of a bounded linear right inverse of the trace operator for Sobolev-Slobodeckij spaces $W_p^s(\Omega)$ when $s-1/p$ is an integer.

Unfortunately, I do not have access to the journal:

Part 2: As pointed out in the answers, there is a paper by Doyoon Kim which completely answers the second part of my question. An earlier paper by Jürgen Marschall also answers this question, with possible exception of some exponents (interestingly, this paper appeared before Costabel's paper). I say "possible", because the both papers treat the traces for $L^p$-based spaces and Marschall's paper exclude the case $s-\frac1p$ is an integer for the boundedness of the right inverse. But his methods maybe applicable for $p=2$ (I have not checked) as we know this case is somewhat special. In any case Kim proves the theorem even when $s-\frac1p$ is an integer, for general $p$.

Part 1: The first part of the question, that is the claim about the endpoint case $s=k+\frac32$ is not true, in the sense that the norm of the trace operator cannot be bounded in terms of the Lipschitz constant alone. Some years after the paper containing the claim appeared, Jerison and Kenig corrected it by publishing a counterexample for domains with $C^1$ boundary, which means there is no hope for the Lipschitz case ($k=0$). Note that the main results in the earlier paper by Jerison and Kenig depend weakly on this claim, and are still true. Their $C^1$ counterexample was based on a counterexample in the Lipschitz case due to Guy David, and I want to record its main idea here.

Consider in $\mathbb{R}^2$ a half disk whose flat part of the boundary is replaced by a sawtooth (or zigzag) with period $2\varepsilon$. Let us call this domain $\Omega_\varepsilon$. Note that the Lipschitz constant of the domain does not depend on $\varepsilon$. 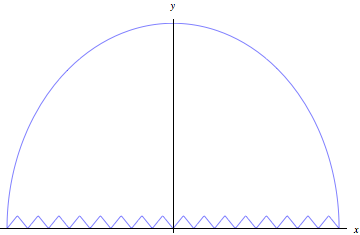