How many "different" colorings (excluding exchanges) exist for a given map (graph)?

In particular I'm interested in regular maps, excluding all maps that can be colored with 2 or 3 colors. For what I need to analyze, maps have to be regarded as differently colored, if the same coloring cannot be obtained by subsequent exchanges of colors. In other words, for example, once a map has been properly colored, I don't want to count all other configurations that derive from subsequent exchanges of colors.

Since the arbitrary nature of choosing colors, these derived configurations are equivalent (for what I'm analyzing) to the first one, since they could have been obtained just choosing different colors in the first place. Instead, there are colorings that differ in such a way that exchanging colors won't help to transform one configuration into the other. In the following picture the graphs named (A) and (B) are the only ones that cannot be converted into one another by swapping colors. 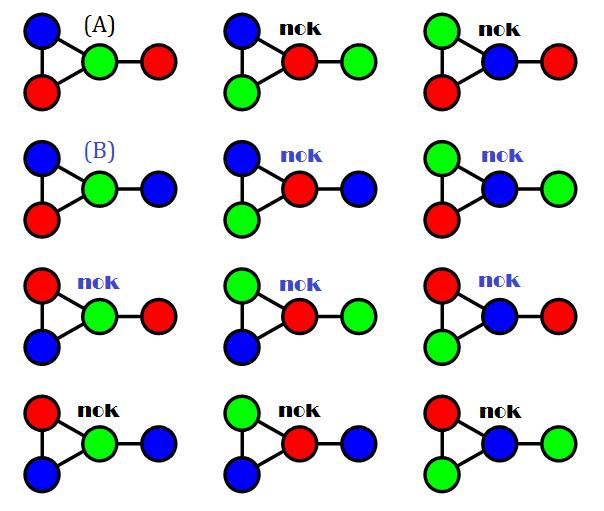 My question is: how many "different" colorings (in the meaning I explained) exist for a given map? I've only found an article on http://en.wikipedia.org/wiki/Graph_coloring that count all possible colorings including swaps. Is there a paper that can help me on this?

I already posted this to math.stackexchange but, so far, I haven't received the answer I was looking for.

In this paper the permutations of colors are systematically "quotiented out" via a certain homological process.

Counting the number of 4-colorings (or indeed, $k$-colorings for any fixed $k\ge3$) of a planar graph is a $\#P$-complete problem (as proved by Vertigan), hence it (presumably) cannot be computed by any algorithm significantly more efficient than a brute-force search.

Computer experiments yield some interesting numbers. The following numbers do not rule out the maps that are 3-colorable. Without thinking too deeply, my guess is that the number that would be ruled out would be extremely small, but this is only a guess.

The estimated time to work with 13 regions with the current program is one month. It could definitely be made faster, but 14, 15, 16 regions are definitely out of reach.

For the curious, the number of graphs investigated with 12 regions was 27360612. Certain obvious symmetries were not used to cut down the number but it is not clear how much the cut down would have been. Nothing beyond a factor of (somewhat less than) two was obvious.

Note that the assumption that regions intersect in connected sets is a large assumption. Without that assumption, the number of colorings would explode.

Bottom line: I too would be interested in any information about the total number (now known to always be at least one) of colorings, modulo permutations of the colors, for planar graphs.

4
maps with a large number of 4-colorings
11
Graphs with only disjoint perfect matchings, with coloring
29
Resolution of multiple edges
5
Combinatorics and symmetry in matrices under row and column swaps
Question feed