This question does not appear to be about research level mathematics within the scope defined in the help center.

Let me give a particular example to start with: Social Inequality. Every day I can see governments trying to eradicate the social inequality in terms of wealth. Assuming wealth can be measure, Is there a theoretical result saying that it is possible (or impossible) to work out such a thing exactly (mathematically speaking)?

Right now, the idea of actually applying the results of Social Choice theory (aka voting theory) is gaining steam. There are plenty of mathematical results that show that plurality voting method (what US has) is one of the least effective ways to measure the will of the electorate, and something like Borda count or Approval voting would result in all kinds of benefits for promoting meaningful democracy.

I'm not sure if he's asking the wrong audience. We could address a slightly different question, namely what are uses of mathematics in social science, or potential uses, that mathematicians would endorse.

One example that comes to mind is the site, FiveThirtyEight. For those who don't follow this as closely, 538 is the number of electors in a US presidential election. The main person at this site, Nate Silver, has hit 50 home runs in the subject of American political polling. (He previously did baseball statistics.) He did this by using first-year graduate statistics, which of course amounts to certain parts of 18th and 19th century analysis. More importantly than the specific formulas, Silver had a disciplined mindset. He also has his ideology (he's liberal), but he wasn't slave to his ideology. His reasoning is, here is a big set of measurements, here are the results of multivariate regression, here is the uncertainty in the results, here are possible systematic errors, here is how we could learn more from different measurements. In the last election, this proved superior to more typical polling analysis; the usual standard is undergraduate statistics at best.

Here's a relevant book, written by a mathematics professor at Cambridge: Naive Decision Making: Mathematics Applied to the Social World 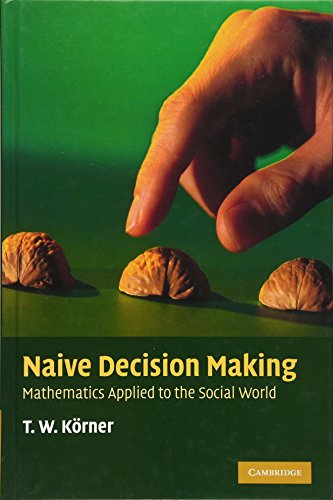 There's nothing wrong with this question per se, but you're asking the wrong audience. Mathematics is used all over the sciences, and mathematicians themselves have relatively little to do with most of its uses. You'd do better to ask this question of social scientists. I don't know if there's a "socialscienceoverflow.net".

One should always be careful in (ab)using mathematics in the context of social science, lest we forget Lang's denunciation of S.P. Huntington's "political opinions masquerading as science."

There's a real and present danger in trying to quantify things that can't necessarily be quantified. Mathematical arguments are considered precise because they are grounded in formal logic, and when the softer sciences try to make use of a mathematical style of argumentation, they often do so with not the best of intentions. That is, they try to misappropriate the certainty of mathematics by camouflaging their premises as mathematical statements.

Mathematics is of great use in many social sciences, as it is the sciences. There was a time when people argued that biology was too "complex" to use mathematics to get significant insights into the subject. I think people no longer think this. Unfortunately, many pieces of mathematics as they "stray" directly from mathematics itself into applications in other fields get "written off" by some people in the mathematics community. For example, Game Theory was pioneered by John Von Neumann and many mathematicians have made contributions to this beautiful subject. However, most of the research in game theory is now done by mathematically trained people (sometimes mathematicians) who teach in economics departments, political science departments, etc. rather than in mathematics departments.

There are many questions some of which arise in game theory but also in areas which have come to be called social choice theory, etc. which are very mathematical which deal with fairness questions of a variety of kinds. Examples include fair apportionment, fair division, fair games, bankruptcy, weighted votings, voting in general, etc. I have been trying to encourage mathematics departments to partner with interested parties to offer an interdisiplinary degree program which I call "fairness studies" which builds on what has been accomplished as of now and to train people to do more work in this area. So far, not a lot of interest.

I'm not really old enough to remember in detail but there was a time when catastrophe theory was seen as a great hope for applications of mathematics to the social sciences and popular articles abounded. People I speak to today don't seem to know much about it so I'll try to give a quick summary:

Some dynamical systems are played out on a manifold but are characterised by having "fast" variables and "slow" variables. Along some axes the dynamics play out too quickly to observe so that all we see is a projection of the dynamical system onto the slow axes. The projection of the manifold typically has a bunch of singularities and these manifest themselves as apparent sudden shifts in the dynamics - catastrophes. For smallish dimensions, Rene Thom classified these singularites finding a fairly small number up to diffeomorphism. The conclusion then is that sudden shifts in the dynamics of a variety of dynamical systems should emerge from this small number of catastrophes and have behaviour predictable from this classification without knowing the details of the system. This universality meant that people could try to tackle systems that were hitherto impossible or difficult to analyse: like prison riots and international relations.

Needless to say, catastrophe theory is no longer popular in the social sciences, but the mathematics is sound with a nice appearance of the ADE classification due to Arnold. It was the "chaos theory" of its time.

There may be some useful lessons to learn from this.

Social scientists have long looked at the connections between people and studied "social networks", e.g. the famous paper The Strength of Weak Ties. There is a huge push currently to infuse this area of social science with more mathematics, and there have been several recent articles in the Notices of the AMS about this "network science".

Agent-Based Models are also used in the social sciences, and the analysis and design of these is deeply mathematical.

I will suppose you have an algebraic taste, and that you want to develop theory rather than analyze data.

A starting point is the observation that relationships in a social group can be modeled by a semigroup. Among the leaders of this area, developed around the 70's, you can find Harrison White. He completed a PhD in theoretical physics at MIT, then a PhD in sociology at Princeton. Currently, he is at Columbia. A serious trouble of this approach (from my point of view) is that relationships change over time, so we do not have a stable algebraic structure. There are ways around it... If you want to follow this lead, then I recommend you the book Algebraic Models for Social Networks by Philippa Pattison.

Another observation is that social sciences are full of relationships we don't measure with numbers. So, a categorical-functorial approach has been developed. In that sense Lorrain and White wrote an enjoyable article: http://www.tandfonline.com/doi/pdf/10.1080/0022250X.1971.9989788 I would like to know how to use some category theory in this context...

I must say many sociologists dislike this approach a lot, because they consider it reductionist. I am afraid research in this area may fall in no man's land i.e neither mathematicians nor sociologists read it. However, there are some groups trying to develop this field. In particular, UC Irvine has the Institute for Mathematical Behavioral Sciences: http://www.imbs.uci.edu/. I also recomend to look up for Santa fe institute.

On other hand, a big problem for social sciences is measurement. Suppose, you develop a social theory (for example [1]). To validate the model you need to test it with reality. This is a big issue in social sciences, because you cannot take people inside a box, isolated other variables, and measure a specific behavior. Plus, real life events have many variables to account for. However, these days Google, Facebook, NSA, etc, are collecting a lot of social generated data; and there is not good theory for this sort of data. The void is being filled by computer scientists; for example Carnegie Mellon has a PhD program at its Center for Computational Analysis of Social and Organizational Systems. I attended their main conference some time ago...It impressed me their focus on extract, analyze, and represent relational data rather than understand it (in the sense of constructing theory). That perspective can be very useful, but I dislike it. Hopefully, social generated data can be used one day for constructing theories. (Noam Chomsky argued for developing theory here: http://www.theatlantic.com/technology/archive/2012/11/noam-chomsky-on-where-artificial-intelligence-went-wrong/261637/).

[1] "A New Model of Wage Determination and Wage Inequality." Rationality and Society, 2009 by Guillermina Jasso

In both psychology and economics, they use statistics as well as game theory. As a simple solution to the problem you mentioned, the government could confiscate all wealth and destroy it, leaving us socially equal.

Also, as Anna points our there's social choice theory where one should mention Arrow's theorem[http://en.wikipedia.org/wiki/Arrow%27s_impossibility_theorem].

Algebraic topology is used in game and social choice theories. There was a question about topology and game theory here is the url for that question:

Are there any interesting connections between Game Theory and Algebraic Topology?

If you want to get an impression of how a mathematical model in social science may look, here is (just as an example) a recent paper on contracts for providers of medical treatements http://www.ratio.huji.ac.il/dp_files/dp516.pdf .

Regarding equality (and fairness that Joe mentioned,) this is certainly a central theme in several social sciences and other academic areas and there is a vast literature around it.

Several great mathematicians did some work in economics. Among them are John von Neumann, Stephen Smale, John Milnor, Abraham Robinson, Saharon Shelah, and many others. Quite many mathematicians have looked at how to approach economics in new ways. So I don't think there is immediate need for mathematicians to come and "clean up the mess".

A nice survey of the mathematics commonly used in economics can be found in the talk Mathematical Methods of Economics by Joel Franklin. It is rather old, but still gives a feeling for the kind of mathematics "typically used" (things like optimization theory) in the larger parts of economics. Within the small area of mathematical economics proper, people use tools from algebraic geometry, lattice theory, model theory, measure theory, functional analysis, algebraic topology and many other mathematical areas.

A site like this is a place where real human beings interact with each other in pursuit of some more or less common objective, so what we do here can be viewed in the light of many different social sciences, including several branches of psychology and sociology.

Just by way of a recent application that comes to mind, see the blog of the Augmented Social Cognition research group @ PARC.

There was a collaboration between the anthropologist Claude Lévi-Strauss and the Bourbarki's founder André Weil. The latter wrote a appendix to the first part of the former's book, "The Elementary Structures of Kinship".

In this appendix, named as "On the algebraic study of certain types of marriage laws (Murngin system)", André Weil shows how the Murgin's marriage laws can be interpreted algebraically with the tools of group theory. For more information, one can read this featured AMS article.

Not the answer you're looking for? Browse other questions tagged soft-question economics or ask your own question.