What is determined by the combinatorics of the shadows of a convex polyhedron?

Define the shadow of a convex polyhedron $P$ in direction $u$ to be the orthogonal projection of $P$ onto a plane whose normal is $u$. The shadow is a convex $k$-gon. I am wondering to what degree $P$ is determined by knowing the value of $k$ for all the distinct shadows. Let me try to make precise what I mean by "the combinatorics of the shadows."

On a unit sphere $S$, mark all the directions parallel to a face of $P$. Equivalently, intersect $S$ with planes through its center parallel to each face of $P$. Here is the result for a regular tetrahedron: 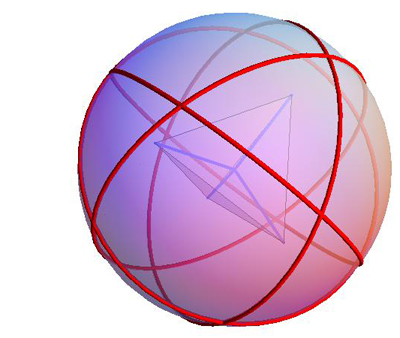 Each cell $c$ of this arrangement of great circles corresponds to a distinct shadow in the sense that, for all $u \in c$, the shadow in direction $u$ is a $k$-gon, with $k$ fixed. In this example, the shadows for a cell are either triangles or quadrilaterals, 3-gons or 4-gons.

Now form a graph, the shadow graph $G_S$, the dual graph of the arrangement: each node is a cell, with an edge connecting cells that share a positive-length arc. Label each node with the integer $k \ge 3$ if that cell's shadows are $k$-gons. For the tetrahedron example, $G_S$ has 14 nodes, labeled as shown below: 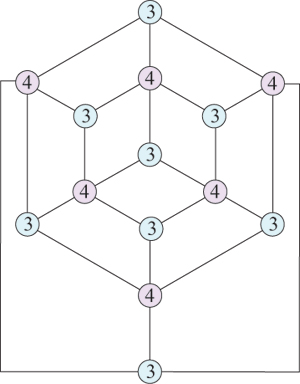 Now imagine you are given the labeled $G_S$ as input. I would like to know to what extent $P$ is determined.

(1) Does this arrangement and/or its dual graph have a name in the literature? I've seen the term Gaussian sphere in the early computer vision literature, but that term is not prevalent. I feel I may be missing a key search phrase.

(3) Given $G_S$, can you find some representative $P$ that realizes those combinatorics?

(4a) A very specific version of this question is: Are all the $P$ that yield the $G_S$ illustrated above tetrahedra?

(5) The question generalizes to polytopes in $\mathbb{R}^d$, which is the root of my question.

I'd appreciate pointers to relevant literature!

This doesn't directly answer your question, I fear, but it's at least tangentially related. Suppose we keep slightly more information than the combinatorics of $G_S$, and label each node as well with the area of the corresponding cell on the sphere. Let $A$ be the sum of the areas corresponding to nodes originally labeled "3" (where the projection is a triangle), and $T$ be the sum of the areas of all nodes. Then it's shown in "Angles as Probabilities" by David V. Feldman and Daniel A. Klain, American Mathematical Monthly, October 2009, that $2\pi A/T$ is the sum of the solid inner angles of the vertices of the original tetrahedron -- that is, you can interpret that angle sum as the probability that an orthogonal projection to a random plane is a triangle.

Here's another tangentially-related answer. There is a nice characterization of "equiprojective polyhedra" due to Masud Hasan and Anna Libiw. (A convex polyhedron is "equiprojective" if, for some $k$, the general shadow is a $k$-gon.)

Not the answer you're looking for? Browse other questions tagged reference-request mg.metric-geometry discrete-geometry convex-polytopes or ask your own question.

3
Convex n-polytope general position vectors to general position vectors of tetrahedron
15
Are the Platonic solids shadows of 4-polytopes?
9
Regular polygon shadows of convex polyhedra
13
How many vertices/edges/faces at most for a convex polyhedron that tiles space?
14
Minimal blocking objects with shadows like a cube
8
Polyhedra that combinatorially shadow a sequence
7
Above/below directed graph on cells of arrangement of lines
1
Counting faces on multipermutahedra/multipermutohedra
3
On some infinite planar arrangements with triangles
5
Is there a 4-polytope without 3-gonal and 4-gonal faces, other than the 120-cell?
Question feed