I have a random walk on $\mathbb{Z}^2$ that takes a step with equal probability in the three directions that avoid retracing the previous step. The walk proceeds until it returns to a lattice point previously visited, at which time it pinches off a simple, closed loop or polygon: 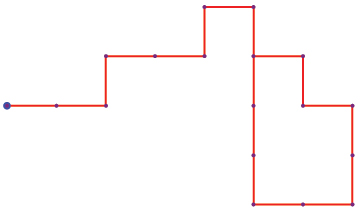 I'd like to know the distribution of the perimeters of these polygons. (In the example above, the perimeter is 10.) Simulations show that the average perimeter is about 5.6, with perimeter 4 the overwhelming favorite, as one would expect: 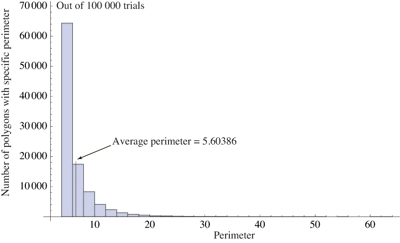 I feel this distribution must be known to the experts and not difficult to explicitly detail, but after looking at hitting times, first-passage times, self-avoidance times, and various other frequently studied random walk quanities, I am not finding a close-enough analog to help. Thanks for any pointers you might provide! 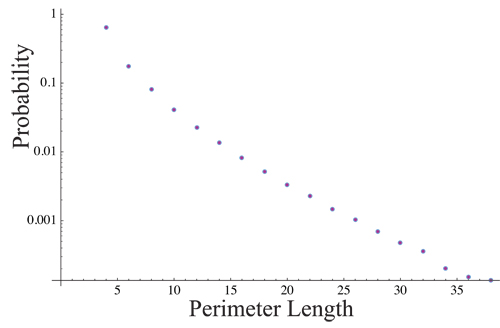 I believe the paper below is on this exact question:

Not the answer you're looking for? Browse other questions tagged reference-request pr.probability discrete-geometry random-walks or ask your own question.

6
What is known about the distribution of lengths of the cycle you get by adding an edge to a uniform spanning tree?