I hope this is appropriate for mathoverflow. Understanding $\mathbb{C}_p$ has always been something of a stumbling block for me. A standard thing to do in number theory is to take the completion $\mathbb{Q}_p$ of the rationals with respect to a $p$-adic absolute value. The resulting field is then complete, but has no good reason to be algebraically closed. You can take its algebraic closure, but that is not complete, so then you take the completion of that, and get a field which is both complete, and algebraically closed, denoted by $\mathbb{C}_p$.

I understand that it is a reasonable desire to have a field extension of $\mathbb{Q}_p$ that is both complete and algebraically closed; my trouble, however, is getting some sort of grasp on how to picture this object, and to develop any intuition about how it is used. Here are my questions; I'd imagine the answers are related:

Please feel free to answer any or all of these questions.

I'll suggest a way to get a hold on $\mathbb{C}_p$ in a "pictorial" way. It is supposed to be similar to viewing $\mathbb{C}$ as a plane acting on itself via rotations, scalings, and translations.

There's a usual picture of $\mathbb{Z}_p$, which looks like the thing below for $p=3$ (taken from the website of Heiko Knospe): 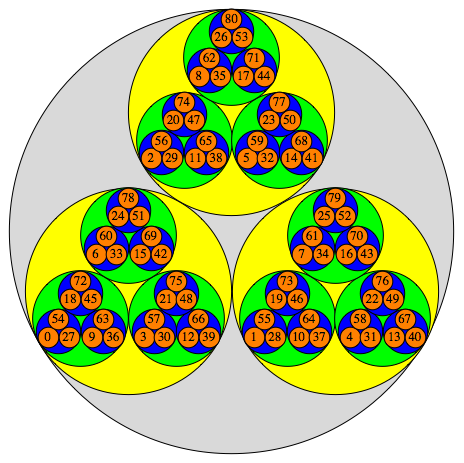 Here the outermost circle is all of $\mathbb{Z}_3$; the three large colored circles are the residue classes mod $3$, the smaller circles are the residue classes mod $9$, and so on. If you want to think about $\mathbb{Q}_p$, imagine this picture continued infinitely "upward," (e.g. this circle is accompanied by two others, inside some larger circle, accompanied by two others, etc.).

Now the operations of multiplication and addition do something very geometric. Namely, addition cyclically permutes the residue classes (of each size!) by some amount, depending on the coefficient of $p^n$ in the $p$-adic expansion of whatever $p$-adic integer you have in mind. Multiplication by a unit switches the residue classes around as you'd expect, and multiplication by a multiple of $p^n$ shrinks the whole circle down and sends it to some (possibly rotated) copy of itself inside the small circle corresponding to the ideal $(p^n)$.

Now zero has the $p$-adic expansion $0+0\cdot p+0\cdot p^2+\cdots$ and so it is the unique element in the intersection of the circles corresponding to the residue class $0$ mod $p^n$ for every $n$. So we have a way to think of zeroes of polynomials over $\mathbb{Q}_p$---namely, a Galois extension of $\mathbb{Q}_p$ is some high dimensional vector space $\mathbb{Q}_p^N$ (which you probably have a picture of from linear algebra) acted on by $\mathbb{Q}_p$, in a way that twists each factor of $\mathbb{Q}_p^N$ and permutes the factors of the direct sum, according to the Galois action. That the extension is algebraic means that there's some way to twist it about (using the previously described actions) to put any element at the $0$ point.

Now, the algebraic closure of $\mathbb{Q}_p$ is some maximal element of the poset of these algebraic extensions---which is hard to visualize as it is not really "unique," but for the sake of a picture one might think of choosing embeddings $K\to K'$ for each $K'/K$, and then taking the union. Finally, think of the completion in the usual way, e.g. by formally adding limits of Cauchy sequences.

Trying to draw pictures of some finite algebraic extensions of $\mathbb{Q}_p$ might help, and figuring out what the actions by addition and multiplication are is a fun exercise. I hope this "word picture" is as useful for you as it is for me.

ADDED: Though this answer is becoming rather long, I wanted to add another picture to expand on the points I made about unramified and totally ramified extensions above.

Here is a picture of $\mathbb{Z}_3$, which I made with the free software Blender; imagine it continuing indefinitely upward: 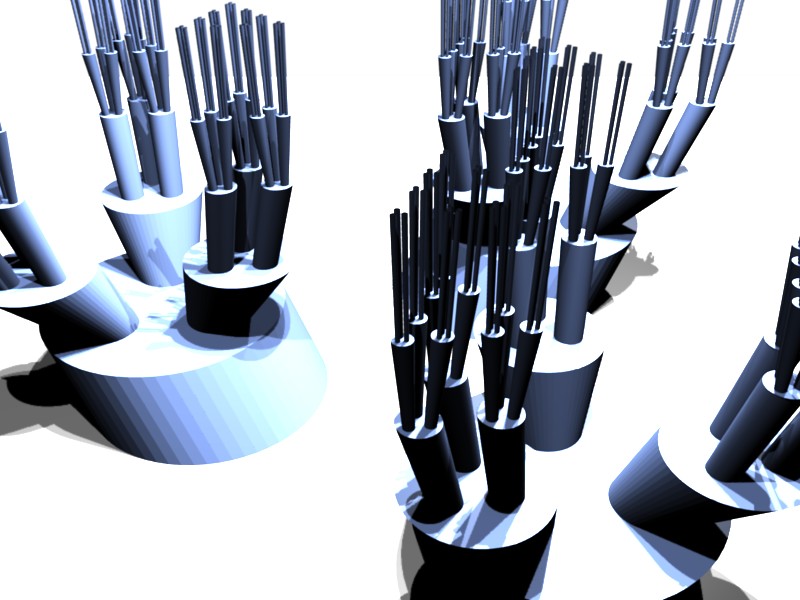 Now what happens when one looks at an unramfied extension of degree $k$? The levels, which correspond to powers of the maximal ideal, should not change, so the levels are still indexed by $\mathbb{Z}$; but the amount of branching on each "platform" is now indexed by $\mathcal{O}_K/m=\mathbb{F}_{p^k}$. So instead of having $p$ branches coming out of each level, one has $p^k$.

On the other hand, what if we have a totally ramified extension of degree $k$? Now $\mathcal{O}_k/m=\mathbb{F}_p$, so there are still $p$ branches on each level. But because the uniformizer now has valuation $1/k$, we can view the levels as being indexed by $\mathbb{Z}[1/k]$ (if you like, the height of each platform is now $1/k$ rather than $1$).

So what is the upshot for $\mathbb{C}_p$? We can view it as a similar diagram, except the levels are indexed by $\mathbb{Q}$, and the branches coming off of an individual platform correspond to elements of $\overline{\mathbb{F}_p}$.

One nice thing about this picture is that one can actually build spaces like the one I've included in the picture---replacing the tubes in my picture with line segments---such that the elements of $\mathbb{Q}_p$ or some extension thereof are a subset of the space (living "infinitely far" from the part I've drawn), with the subspace topology being the usual topology on the local field. Furthermore, the construction is functorial, in that an embedding $K\hookrightarrow K'$ induces a continuous map of spaces. The distance between two points in the local field is then given by their "highest common ancestor" in this garden of forking paths.

(This picture is essentially a description the Berkovich spaces mentioned by Joe Silverman, though I am essentially a novice in that regard, so it's quite possible I've made some mistake; you should take this as a description of my intuition, not Berkovich's definition.)

Among the reasons that $\mathbf{C}_p$ is hard to "visualize" are the it is totally disconnected (as is $\mathbf{Q}_p$) and it is not locally compact. The lack of local compactness means, for example, that you can't put a nice measure on $\mathbf{C}_p$. Many people these days instead work on the Berkovich affine line $\mathbf{A}_p^{Berk}$ or the associated Berkovich projective line $\mathbf{P}_p^{Berk}$. The Berkovich line is a topological space that

So people do measure theory, and even harmonic analysis, on Berkovich spaces. You can find a brief introduction, with some pictures, in my book The Arithmetic of Dynamical Systems, Springer, Section 5.10. For a more complete introduction, there's a great new book by Baker and Rumely, Potential Theory and Dynamics on the Berkovich Projective Line, American Mathematical Society, 2010.

Final comment: The fact that $\mathbf{C}_p$ is not spherically complete, which was mentioned by Pete L. Clark, plays a role in Berkovich space. More precisely, it leads to some extra points that are needed to make Berkovich space complete.

Since there are already several very good answers, I just discuss question 4 (how is ${\mathbb C}_p$ typically used?) with one example of use which made a great impression on me when I learnt it, and made me think that ${\mathbb C}_p$ was something deep and serious, and not only a very amusing curiosity. This example is a theorem of Tate and Sen, which states that if $V$ is a finite-dimensional over $\mathbb{ Q_p}$ vector space with a continuous linear action of $G=$Gal$(\overline{\mathbb Q_p}/{\mathbb Q_p})$ (that is, $V$ is a $p$-adic representation of $G$), then the following are equivalent:

(2) The inertia subgroup of $G$ acts on $V$ through a finite quotient (in more knowledeable words, $V$ is potentially unramified).

To appreciate this theorem, it may be useful to solve for oneself the following elementary exercise: if in (1), ${\mathbb C}_p$ is replaced by $\overline {\mathbb Q_p}$, then (2) should be replaced by "$G$ acts on $V$ through a finite quotient". Somehow, replacing $\overline {\mathbb Q_p}$ by its completion allows (1) to see inside the group $G$ and detect the behaviour of the inertia subgroup in it.

One point that I don't think anyone has mentioned yet is that $\mathbb{C}_p$ is isomorphic (as an untopologised field) to $\mathbb{C}$. More generally, any two uncountable algebraically closed fields of the same characteristic and cardinality are isomorphic, if I remember correctly. Of course the proof is horrendously non-constructive, but the very definition of $\mathbb{C}_p$ is already horrendously non-constructive. So instead of worrying about what $\mathbb{C}_p$ is, you can instead worry about why $\mathbb{C}$ admits a $p$-adic metric with respect to which it is complete. I don't have anything to offer about that.

You may, or may not, be able to derive some inspiration from "Artist's conception of the 3-adic unit disc" by A. T. Fomenko, included as frontispiece in Neal Koblitz' book, $p$-adic Numbers, $p$-adic Analysis, and Zeta-Functions.

Not the answer you're looking for? Browse other questions tagged algebraic-number-theory or ask your own question.