After lurking MO for a while, I decided I'd jump in. Why not start with a question?

Specifically, I have a question about a natural set that sort of "measures" the failure of a real quadratic field to be norm-Euclidean.

Let $K$ be a real quadratic field and let $V$ denote the two-dimensional real vector space $K\otimes_{\mathbb Q}\mathbb{R}$. The ring of integers $\mathcal{O}_K$ embeds as a lattice in $V$, and the quotient is a real torus $T$ equipped with an automorphism of infinite order induced by a fundamental unit. The field norm on $K$ extends in a natural way to a map $V\to \mathbb{R}$ (extend the galois automorphism and use the usual definition of norm, or just work in coordinates in the obvious fashion).

Here's where I wish I knew how to make one of those nifty shaded boxes to highlight the question...

What is the nature of the set $X$?

Though I know basically nothing of ergodic theory, it seems that $X$ must have measure zero since it's preserved by the (ergodic) automorphism induced by the fundamental unit. It seems to look like some sort of Cantor-like set, but I have no idea how to really get my hands on it.

1) Is there some reasonable way to parameterize or otherwise describe $X$ somewhat explicitly (I ran across something called a "binary arithmetic coding" once that purports to be able to do this, but it seemed ill-suited to this particular set to me).

2) What is the Hausdorff dimension of $X$? Does it have any relation to the arithmetic of $K$? (Wouldn't it be cute if it had something to do with the class number, etc.)

Of course, one could ask a similar question about any number field other than $\mathbb{Q}$ and quadratic imaginary fields, but this seemed like the place to start.

For what it's worth, here is a numerical plot of four approximations for the case $\mathbb Q(\sqrt{23})$, using coordinates $(x,y)$ to represent $x + y \sqrt{23}$. The plot covers a bit more than the fundamental domains for the quotient torus. The larger areas are points $p$ such that the norm of the difference with any of $5\times5$ array of grid points centered at the origin is greater than 1. The computation with a $13 \times 13$ grid shaves off the green areas, and the computation with a $21 \times 21$ grid shaves off the red. The dark purple areas are a computation taking into account lattice points $(n,m)$ with $|n| \le 60$: three regions have split into four parts, the other two have shrunk and have not split. The black dots are the 46 fixed points on the torus for the Anosov map ${{24,115},{5,24}}$ corresponding to multiplication by a generator $24 + 5 \sqrt{23} $ of the group of units mod $\pm 1$. (An earlier version was incorrect: an error in a formula made it appear that the regions were shrinking to 3 periodic points)

Since these sets are invariant by an Anosov diffeomorphism, I'm sure many things can be deduced using dynamics as well as number theory, but I thought I'd start by sharing these pictures. 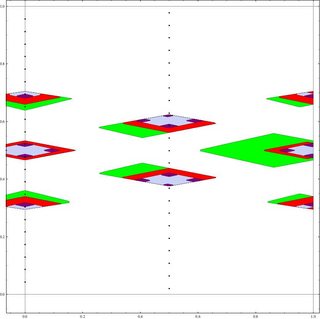 Here is a plot of the minimum norm of the difference of points, in a small neighborhood of the unit square, to an algebraic integer $n + m \sqrt{23}$ where $n \le 60$. The graph is truncated at norm 1, so that the small plateaus correspond to the purple areas in the previous picture. 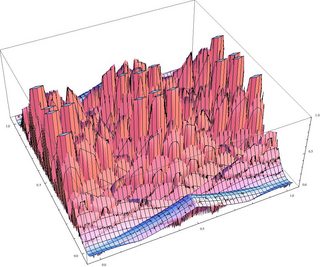 The globally minimum norm is the infimum of this function together with its images under the above Anosov map, whose eigenvalues are $47.979$ and $.02084$, since $60 > 47.97$. the infimum is a.e. 0, by ergodicity, as more and more long thin ravines are sliced through the landscape in two prevailing directions along the stable and unstable foliations of the Anosov diffeomorphism. The plateaus themselves will be stretched by a factor of ~50 in one direction and a factor of .02 in the other.

For sufficiently small values of $a > 0$, the set of points whose minimum norm of difference to a lattice point is $> a$ contains a Cantor set (and I think it is a Cantor set). This can easily be seen by using a Markov partition consisting of rectangles whose edges are on leaves of the stable and unstable foliations, and translating the dynamics to symbolic dynamics (the sequence of rectangles that an orbit is in). Any closed set of sequences that does not contain a representative of $(0,0)$ on the torus has a positive minimum value for norm.

Here's a similar plot, for the same field, of points whose minimum norm to the same set of algebraic integers is $> 1/2$: 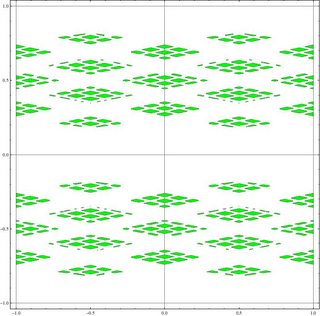 This picture more strongly suggests that the intersection will be a Cantor set, of significantly higher Hausdorff dimension. This is testable in principle using the dynamics. The Hausdorff dimension should be computable, at least numerically, using symbolic dynamics. For good values $b$ of the cutoff of norm, the closure of the symbolic coordinates for corresponding set $X_b$ should be a subshift of finite type, specified by a nonnegative matrix, and the Hausdorff dimension is a function of the Perron-Frobenius eigenvalue compared to the eigenvalue for the symbolic dynamics on the full torus. 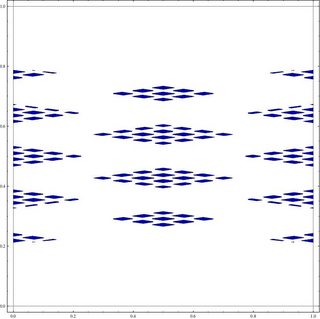 I hope someone with expertise I do not have will add an answer or comment (added since writing this, I'm glad to see that Franz Lemmermeyer has done so).

As it stands, I guess your question is hopeless. There are some answers if you replace the condition $|N(x-y)| < 1$ by $|N(x-y)| < \kappa$, where $\kappa$ is chosen as the infimum over all constants $\lambda$ for which $|N(x-y)| < \lambda$ satisfies $U=V$. This infimum is called "Euclidean minimum" (or, classically, the inhomogeneous minimum of the norm-form of the corresponding quadratic number field).

Barnes and Swinnerton-Dyer (The inhomogeneous minima of binary quadratic forms, Acta Math. 87, 88, 92, 1952--1954) have studied the set X for various families of number fields (and $\kappa$ as above). The set is sometimes finite and sometimes countably infinite. Recent results in this direction have been obtained by Jean-Paul Cerri, Inhomogeneous and Euclidean spectra of number fields with unit rank strictly greater than 1 [J. Reine Angew. Math. 592 (2006), 49-62] using ergodic theory.

Not the answer you're looking for? Browse other questions tagged nt.number-theory algebraic-number-theory or ask your own question.

21
The difficulties in proving modularity lifting theorems over non-totally real fields
9
Euclidean real quadratic fields
9
When can number rings be spanned (as $\mathbb{Z}$-modules) by units?
6
Counting fundamental units of real quadratic fields
18
Are quadratic units cyclotomic norms?
5
Are there primitive quartic CM fields whose norms of units give all totally positive units of the real quadratic subfield?
6
Why is the regulator of a number field normalized the way it is?
Question feed