Where and when did "transition to abstraction" courses start?

I often find myself debating the content and structure of such courses and I would find it useful to know the basic history.

I don't remember any such offerings during my own undergraduate days in the '70s. I have always supposed these courses appeared as compensation for a decline in high school Euclidean geometry teaching, but I would call my understanding anecdotal.

Some old-timers may have the whole history in their heads, if so thanks. Otherwise it would be useful to me to hear if you had such a course a long time ago (and where, and from who), but please only comment if your date trumps the earliest previously posted date. In any case I feel sure such courses were popular by the 1980s.

Polya's How To Solve It dates to 1945 and roughly addresses these needs, but I have always understood it as a popular book rather than a a text. So I wonder what were the first texts written to support such courses?

Please refrain, of course, from opining about the efficacy or effectiveness of such courses, but feel free to cite any published research addressing the same. Thanks.

I assume that this question is asking about Mathematics Education courses in the United States. A short answer to this question is to read a nice piece on the history of the mathematics major (in the U.S.) by Alan Tucker. The citation is:

Tucker, A. The History of the Undergraduate Program in Mathematics in the United States. The American Mathematical Monthly, 120(8), pp. 689-705.

(I believe a free version is available here.)

Here are a couple relevant pieces to your specific question from the Tucker article. The first one references the sort of class that you mention and which was available prior to the 1970s. The latter one notes that it was primarily the universities themselves, rather than, e.g., recommendations from mathematicians (an example being the CUPM = the MAA's Committee on the Undergraduate Program in Mathematics) that were the driving forces behind the institution of such courses. 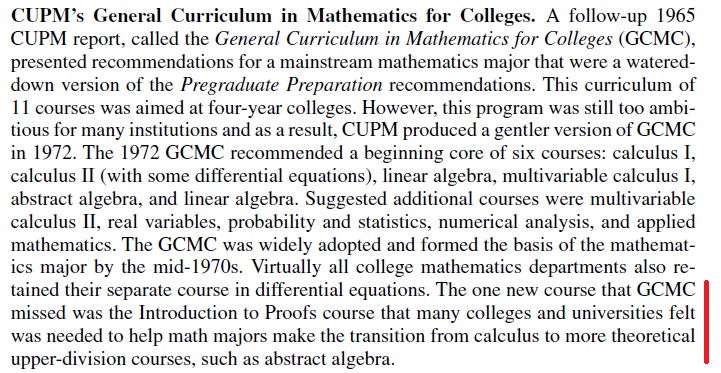 Separately, I was recently reading through a Mathematics Education thesis from Columbia University Teachers College that discusses the history of the mathematics major at liberal arts institutions. You can find a copy through DigitalDissertations; the citation is:

Besides being of general interest, this thesis also led me to work by a mathematician who worked at the University of Chicago by the name of E.P. Northrop. Already by the 1940s Chicago was instituting a course quite similar to the sort that you have described. More information can be found in a couple of Northrop's papers:

Here is a relevant excerpt from the former citation: 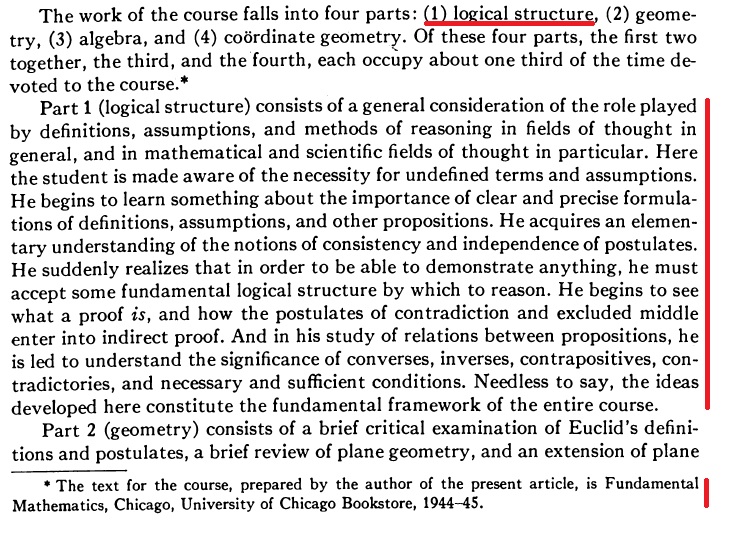 As requested, you can see in the above a reference to a specific textbook (Fundamental Mathematics) that was used for purposes similar to those you outlined, and which dates back to the 1940s.

I am sorry I cannot respond to your question in more detail; a full answer is probably fodder for an entire thesis in the history of Mathematics Education. Hopefully, though, the few references provided here can get you started if you wish to read further.

I took such a course at Temple University in the spring of 1972. The professor was Ray Coughlin, and the book was Fundamental Concepts of Mathematics by Foulis, which I fell in love with. I still keep a few copies around and occasionally give them away to students at about that stage.

Not the answer you're looking for? Browse other questions tagged mathematics-education or ask your own question.

7
Where can I find resources for creating a mathematics "bridge course"?

51
When exactly and why did matrix multiplication become a part of the undergraduate curriculum?
Question feed