What is the knot associated to a prime?

I can't help but ask this question, having found out about arithmetic topology here on MO. There is a concise description of the MKR dictionary central to this philosophy here. This dictionary is used to translate statements in three-manifold topology into statements in number theory, and vice versa. Often, but not always, the resulting translated statements turn out to be true.

Before asking the following dumb question, let me be absolutely clear that I understand that the general analogy between knots and primes is complicated, and isn't perfect but only fruitful.

According to p.24 in Lieven LeBruyn's slides (35 MB!), the trefoil knot is associated to 3. LeBruyn also gives pictures for 2,5 and 7. Is there, associated to the MKR analogy, a natural way to assign a knot to every prime?

This, I imagine, should not be possible in any reasonable way. I ask with the dim hope that I may be wrong.

Must the knot associated to 3 be the trefoil, as shown in LeBruyn's slides?

I should have been more careful in drawing the slide mentioned above (and reproduced below). I didn't want to convey the idea that there is a method to assign to a knot a specified knot (and certainly not one having exactly p crossings...). I only wanted to depict the result that different primes should correspond to different knots. 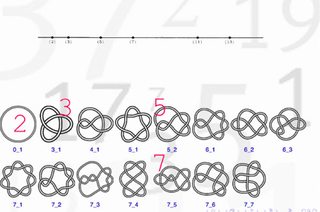 Here's the little I know about this :

Artin-Verdier duality in etale cohomology suggests that $Spec(\mathbb{Z})$ is a 3-dimensional manifold, as Barry Mazur pointed out in this paper 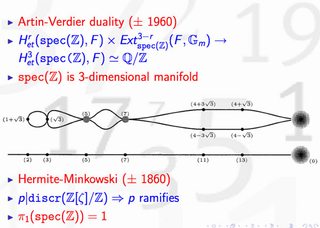 The theory of discriminants shows that there are no non-trivial global etale extensions of $Spec(\mathbb{Z})$, whence its (algebraic) fundamental group should be trivial. By Poincare-Perelman this then implies that one should view $Spec(\mathbb{Z})$ as the three-sphere $S^3$. Note that there is no ambiguity in this direction. However, as there are other rings of integers in number fields having trivial fundamental group, the correspondence is not perfect.

Okay, but then primes should correspond to certain submanifolds of $S^3$ and as the algebraic fundamental group of $Spec(\mathbb{F}_p)$ is the profinite completion of $\mathbb{Z}$, the first option that comes to mind are circles 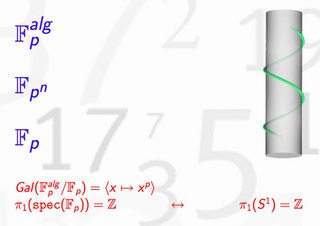 Hence, primes might be viewed as circles embedded in $S^3$, that is, as knots! But which knots? Well, as far as I know, nobody has a procedure to assign a knot to a prime number, let alone one having p crossings. What is known, however, is that different primes must correspond to different knots 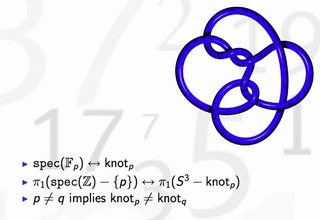 because the algebraic fundamental groups of $Spec(\mathbb{Z})- \{ p \}$ differ for distinct primes. This was the statement I wanted to illustrate in the first slide.

But, the story goes a lot further. Knots may be linked and one can detect this by calculating the link-number, which is symmetric in the two knots. In number theory, the Legendre symbol, plays a similar role thanks to quadratic reciprocity 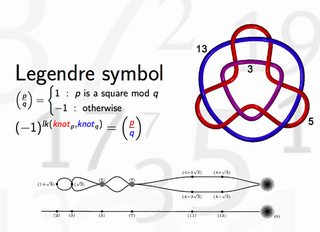 and hence we can view the Legendre symbol as indicating whether the knots corresponding to different primes are linked or not. Whereas it is natural in knot theory to investigate whether collections of 3, 4 or 27 knots are intricately linked (or not), few people would consider the problem whether one collection of 27 primes differs from another set of 27 primes worthy of investigation.

There's one noteworthy exception, the Redei symbol which we can now view as giving information about the link-behavior of the knots associated to three different primes. For example, one can hunt for prime-triples whose knots link as the Borromean rings 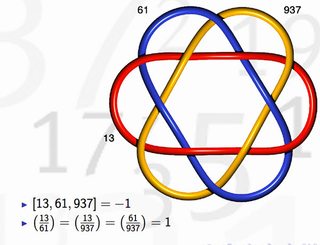 (note that the knots corresponding to the three primes are not the unknot but more complicated). Here's where the story gets interesting : in number-theory one would like to discover 'higher reciprocity laws' (for collections of n prime numbers) by imitating higher-link invariants in knot-theory. This should be done by trying to correspond filtrations on the fundamental group of the knot-complement to that of the algebraic fundamental group of $Spec(\mathbb{Z})-\{ p \}$ This project is called arithmetic topology 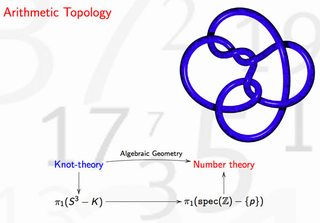 (my apologies for cross-posting. MathOverflow was the intended place to reply to Jon's question, but this topic was temporarily removed yesterday.)

Not the answer you're looking for? Browse other questions tagged knot-theory nt.number-theory or ask your own question.

12
How to get 3-manifold, Knots from Number Fields
19
Gauss linking integral and quadratic reciprocity

19
Lie algebra automorphisms and detecting knot orientation by Vassiliev invariants
16
Computing (on a computer) the first few (non-trivial) zeros of the zeta function of a number field.
2
is twisted torus knot T(7,2;4,1) prime?
27
Does this knot invariant distinguish trefoil chiralities?
2
The knot group of a prime knot
1
Knot group epimorphism from a prime knot
5
Are the Szpiro ratios of 37b1 over certain number fields {33,39,42,48,51,66}?
8
What does the representation category of the knot group know?
6
An analogy between the ring of polynomials in two variables and another (commutative?) ring
Question feed