How many edge-disjoint paths go from upper left to lower right in a $4 \times N$ rectangular gridwork of streets?

My interest in this problem traces back to an 11 year old girl who really took to one-way path counting problems. After doing several configurations of streets, she decided to come up with a problem of her own. She presented a $3 \times 3$ gridwork of two-way streets (forming 4 blocks in a $2 \times 2$ arrangement) and added the condition that a street could be traversed at most once. She asked how many such paths are there from upper left to lower right? (Answer: 16.)

The $3 \times N$ case is trickier, but the number of edge-disjoint paths from upper left to lower right still satisfies a finite linear recurrence relation.

Naturally, I turned to OEIS and found sequences A013991-A013997, where Dan Hoey gives the number of edge-disjoint paths between opposite corners of $K \times N$ grids for $K = 3, 4, 5, ..., 9$ and small $N$. He also provides the first few values for the $N \times N$ cases (sequence A013990). (Note, his numbering counts blocks, not streets.) For $K=3$, he provides a generating function. In a recent communication, he explained the computer algorithm he used to compute the values but indicates that he did not find a recurrence relation for these sequences, so as far as I know, there is no known way to determine the answer to the title question for large $N$.

I've also spoken with Gregg Musiker, Bjorn Poonen, and Tim Chow about this problem. Although none knew how to do the $4 \times N$ case, Gregg simplified my recurrence relations for the $3 \times N$ case, Bjorn suggested many related questions and suggested an asymptotic formula for the $N \times N$ case, and Tim suggested looking at the related literature on self-avoiding walks, such as the book by Neal Madras and Gordon Slade, though it's not clear to me how related edge-disjoint and self-avoiding are with respect to counting them.

Because there are finite linear recurrence relations for the $2 \times N$ and $3 \times N$ cases, it seems natural to also ask:

Is there a finite linear recurrence relation for the number of edge-disjoint paths between opposite corners of a $4 \times N$ gridwork of streets?

Are these problems intractable?

To amplify on Christian's answer, the problem on a $K \times N$ grid for fixed $K$ and varying $N$ admits a finite-state transition model, so in particular is given by a linear recurrence.

The key is to find the right set of states. If you take an edge-disjoint path on a $K \times N$ grid and slice it on a vertical line through the middle passing through a set of horizontal edges, you'll see the path crossing along some odd number of these edges ($\le K$). On both the left and right we'll see a collection of paths with these endpoints. There's another constraint, that we end up with a single, connected path without disjoint loops; to take that in to account, also record a matching: which endpoints are paired up on the right hand side. All but one of the endpoints are paired up in this way. (You could also choose the left, and end up with a slightly different matrix.)

Next consider the transitions. If you consider two adjacent vertical slicings of a path, you'll see two possibly different states. The set of edges that are occupied in the middle is determined by which edges are occupied in the two different states. There is sometimes a choice about how the strands are connected up. However, some of these choices will be ruled out by the constraints on the connectivity; usually you will end up with just $0$ or $1$ possibilities.

For the $4 \times N$ case, you would get a $16 \times 16$ matrix, which is straightforward but somewhat tedious to work out. As a result, the answer will satisfy a linear recurrence of order $16$.

Update 2: And here's an image illustrating what is actually being counted: 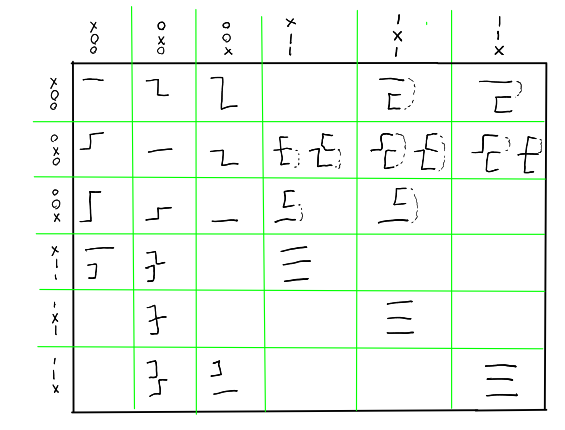 I permuted the entries slightly, but they're labelled along the sides. The dotted paths are there to help in the counting: the non-allowed configurations would form a closed loop.

An example: If $c$ contains one black and two red edges, then using the vertical edges on $v_j$ in an admissible way one may

(a) continue the black and the two red edges into the next column individually, maybe at a different level,

(b) connect the black end of $c$ to either one of the red ends by a vertical segment creating a $\supset$ and continue the other red edge of $c$ into the next column, but as a black edge,

(c) throw in two red edges beginning on $v_j$ which are connected by a vertical segment creating a $\subset$.

Here is a pictorial list (hopefully complete) of the possible transitions $c\to c'$:

15
Dyck paths on rectangles
11
Highbrow interpretations of Stirling number reciprocity
3
How many double paths in a grid?
5
Simple lower bounds for Bell numbers (number of set partitions)?
17
Randomly switching street lights, in a square city
10
Distribution of the area statistic for Catalan paths
4
Generalization of an up, left, right path problem
4
Number of self avoiding paths on a grid graph?
4
Generating function for lattice paths making aribitrary (i,j)-up-right move in one step and fitting rectangular (m,n)?
Question feed