Is there a homogeneous convex polyhedron which floats so that some subset (perhaps all) of its faces is distinguished as "up" (above the water line) in stable equilibrium, each face with equal probability, and there are no other stable orientations?

This question was prompted by the recent MO question on fair polyhedral dice. My thought is that one might shake a container of liquid and await the floating polyhedron to stabilize. Perhaps permitting inhomogeneous polyhedron interiors would make this more feasible?

I have been unsuccessful in finding much information on floating polyhedra, perhaps because this is such a bad idea. :-) I know about the center of boyancy and the metacenter and the conditions for stability. And I know of Ulam's "Floating Body Problem" from the Scottish Book, apparently still unsolved (mentioned in Unsolved Problems in Geometry by Croft, Falconer, Guy). None of what I found is shedding much light.

Any pointers would be appreciated!

Edit. Thanks Igor, sleepless, Douglas for your comments, and apologies for not being clear! Let me attempt a sharper question.

Let the density of the polyhedron $P$ be half that of water, $\rho=\frac{1}{2}$. I seek a $P$ that has $k>1$ distinct stable floating orientations. So $P$ is unlike a sphere, which is stable in any orientation (Ulam's question is: Is the sphere the only such convex body?). And $P$ is unlike a boat-hull shape that is designed to have a unique stable orientation, i.e., is monostatic. In each of $P$'s stable orientations, some face's normal vector $n_i$ is vertical, perpendicular to the water level, pointing up. So if you look down from above, you see that face $F_i$.

That is the basic question. Now some embellishments:

Were these conditions satisfied, one could place $P$ in a glass cylinder half full of liquid, shake it, wait, and look down through the cylinder top to see the numbered up-face.

Added below: discussion and illustrations for equilibria of floating objects

For the 2-dimensional shape below with 4 long spikes and density .5, it seems clear that the only stable equilibrium is with one spike pointing straight down and another pointing straight up. Two spikes will float to the sides, with their centerlines at the water level. A slight tilt shifts the center of buoyancy (= mean of points below the waterline) toward the side, and provides a strong righting force. 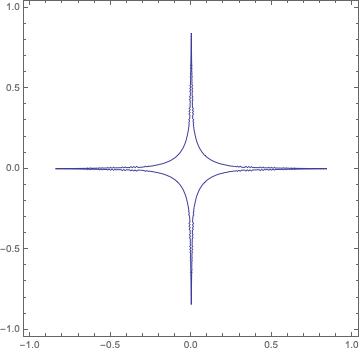 This example is easily modified to be a 12-gon in the shape of a cross, with 4 short faces that want to point straight up.

Here's a corresponding 3-dimensional shape, which should float with one of the spikes pointing up: 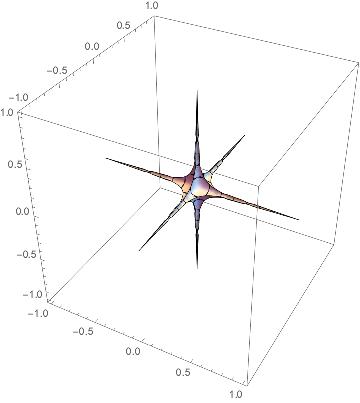 To get better intuition for how this works, I tried rotating different shapes using Mathematica, plotting the underwater portion, its center of mass, and watching how the depth of the center of mass (in an amplified view) fluctuated with angle. The red dots in the pictures below are the centers of mass of the underwater portion. The black dot on to the left side of the object is at a height that magnifies the height of the underwater center; the higher it is, the more stable the object. (In the live examples, the sliders will adjust the angle, and you can add or remove vertices by clicking). 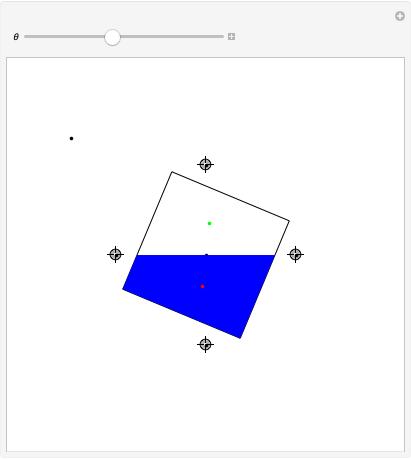 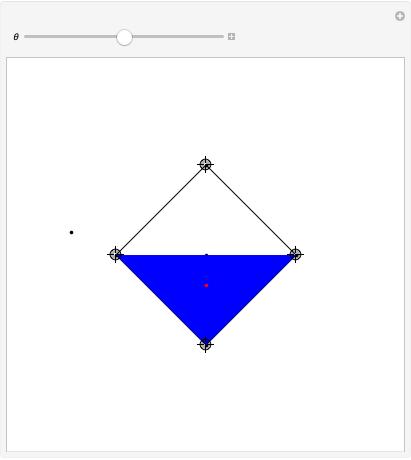 It's probably easier to get a good intuition by looking at the relationship of the underwater center of mass (negative weight) versus the above water center of mass (positive weight). When they are not aligned vertically, then they exert a torque; this torque amounts to the gradient of the potential function. Below, for example, is a square at a skew angle, with the underwater center marked in red, pushing upward, and the abovewater center marked in green pushing downward. This torque rotates the floating square toward a diagonal position where it has a stable equilibrium.

For a two-dimensional square (or a long 3-dimensional object with square cross-section), the stable equilibria are when a diagonal of the square is horizontal. Similarly, a hexagon is stable when a diagonal (going from a vertex to its opposite vertex) is horizontal, and otherwise unstable. For polygons with an odd number of vertices, the equilibria are when one face is pointing straight down.

Based on these, I'm confident that an octahedron truncated just slightly will float in equilibrium with the truncated faces pointing upward, because an octahedron with floating with one of its diagonal vertical has a lot of its underwater mass relatively close to the surface. With somewhat less confidence, I think the truncated cube would behave similarly. It should be straightforward (although tedious to set up) to compute the equilibria in this way for any polyhedron.

Here is the plot of potential energy for a floating square of buoyancy .5, as a function of angle. (Units for the vertical scale are arbitrary). The bottoms of valleys are the stable equilibria, at odd multiples of $\pi/4$, when the square is floating with a corner up: 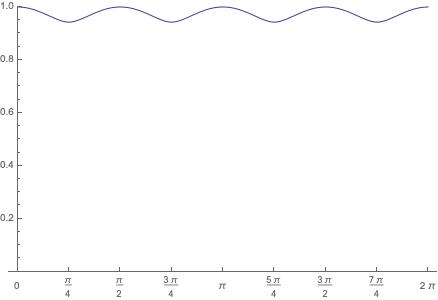 Here is a similar plot for the cube, when the cube is rotated until the vector $(x,y,1)$ is vertical. The full graph would have domain $S^2$, tiled by 6 copies of this unit, one for each face of the cube.

From the graph you can see that there is a local maximum when any face is horizontal (the top of the mountain), a saddle point when an edge is horizontal and the diagonal of a face is vertical (the saddle points are the midpoints of the bounding edges in this plot), and a minimum when a diagonal of the cube is vertical (the corners in the plot). Notice how low the mountain passes are between adjacent minima. This indicates when a main diagonal is vertical, rotation any of the three lines perpendicular to any face at its midpoint takes relatively little energy, far less than is required to rotate the cube so that a face is horizontal. (Note: this energy function is highly dependent on the density of the cube, so it is hard to draw a conclusion about a floating ice cube or a floating wooden block). 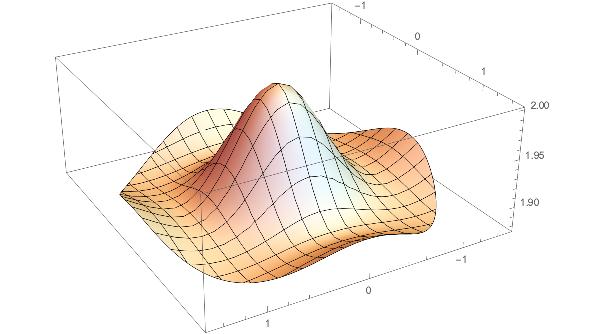 Quick thought: make a four-sided pyramid of ice, square base of edge length $x$ and have the height be less than $x$. This type of ice-cube or pyramidal ice-berg has the majority of its buoyancy at the square face, thus the subset of size $1$ of {flat square base} is more likely to be the "face up" face in a container. This could probably be tested better with a plastic homogeneous pyramid rather than with an ice-cube pyramid which would melt during the experiment and change the results over time.

There's probably a decent ratio $a$ such that if the height of the pyramid is less than $ax$ that the pyramidal-square base is significantly biased to be the "face up" floating face.

Not the answer you're looking for? Browse other questions tagged reference-request mg.metric-geometry polyhedra classical-mechanics or ask your own question.