Parametrization of the boundary of the Mandelbrot set

Does anyone know how to parametrize the boundary of the Mandelbrot set? I am not a fractal-geometer or a dynamical systems person. I just have some idle curiosity about this question.

The Mandelbrot set is customarily defined as the set $M$ of all points $c\in\mathbb{C}$ such that the iterates of the function $z\mapsto z^2+c$, starting at $z=0$, remain bounded forever. Most very pretty depictions of the Mandelbrot set show $M$ as an intersection of an infinite sequence of sets $M_1\supset M_2\supset M_3\supset\cdots$, where the boundary of $M_i$ is the curve $|z_i(c)|=K$. Here $z_i(c)$ is the $i$th iterate of $z\mapsto z^2+c$, starting at $z=0$, and $K$ is some constant which guarantees that future iterates will escape. These curves $\partial (M_i)$ guide the viewer to see the increasingly intricate parts of the Mandelbrot set.

Each of these curves $\partial(M_i)$ is analytic and closed. They can thus be parametrized nicely with a trigonometric series. To be more specific, each boundary has a parametrization of the form $$z(t)=\sum_{k=0}^\infty a_k\cos(kt)+i\sum_{k=0}^\infty b_k\sin(kt).$$ (In fact, since each boundary $\partial(M_i)$ is determined by a polynomial equation in the real and imaginary parts of $c$, I think each of these series should terminate. Correct me if I am wrong.) I would think that the limiting path should also have some nice parametrization with a trigonometric series. Is this limit the same for all $K$? If the limit is not the same for all $K$, then is there a limit as $K\rightarrow\infty$? What are the Fourier coefficients?

Indeed, it is not even known whether the boundary is a curve at all (i.e., locally connected): this is currently probably the most famous conjecture in one-dimensional holomorphic dynamics.

To expand on Gerald Edgar's answer, some key phrases for you to look into are "Douady-Hubbard potential" and "external rays."

An external ray is the image of the ray $\arg z = \theta$ for fixed $\theta$ under Gerald's conformal map $\psi$.

I'm pretty sure it hasn't been proved that $\psi(\zeta)$ is well defined for all $\zeta$ on the unit circle, but I think it is conjectured to be so. (Sometimes this is phrased as saying that the external ray "lands.") However, the external rays at rational angles $2\pi m/n$ are known to land, and moreover, the dynamics at the landing points on the boundary is related to the fraction $m/n$ in a really nice way. (There's an analogy between the doubling map $\theta \mapsto 2\theta$ on the circle and holomorphic maps $z\mapsto z^2+c$, and the dynamics of $\theta$ under the first map are related to the dynamics of the $z\mapsto z^2+c_\theta$ map, where $c_\theta$ is the landing point of the corresponding ray on the boundary of the Mandelbrot set.) Thus, this parametrization of the boundary is indeed an important and natural object (if it is well defined, as conjectured). 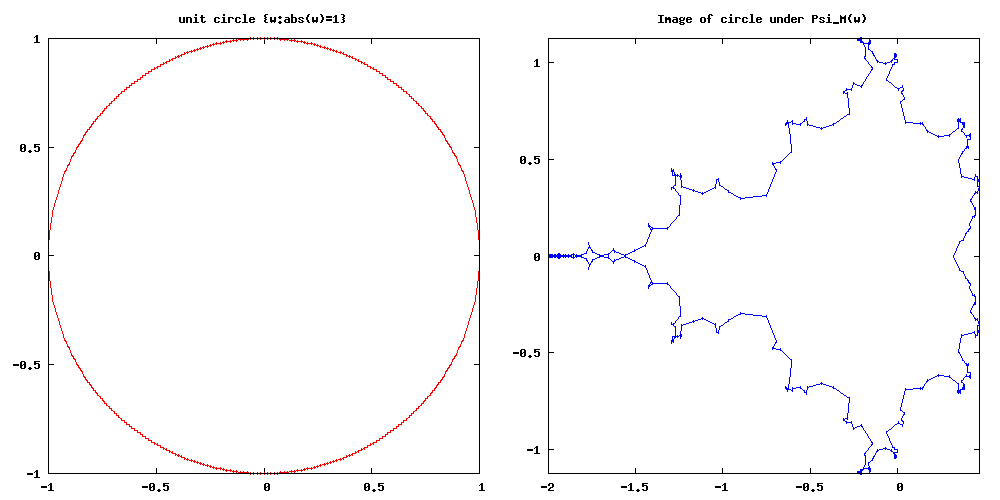 Here are some images, code and description showing some parametrisations :

circle to component ( or its part) :

My conjecture would be that such a parametrization would not work. Try something similar for a simpler (in certain viewpoints) structure such as a Koch snowflake. Would your approach to parametrization allow you to generate a function based on $n$, the number of recursive iterations used to generate the snowflake to a certain depth? I would think not. You might be able to, at least for the Koch curve, parametrize the "rubber band" hull around it, but that would be trivial for most recursively defined objects.

Take a look at "External Angles". Apparently a line coming in from infinity at any angle, always staying perpendicular to the potential lines, will eventually touch on the set.

I'm still trying to figure out the exact math behind them myself. His Haskell sources are crypto to me.

Not the answer you're looking for? Browse other questions tagged ds.dynamical-systems fourier-analysis fractals complex-dynamics or ask your own question.

12
Algorithm for computing external angles for the Mandelbrot set