An answer of André Henriques' inspired the following closely related CW question. Parts of the following is extracted from his answer and my comments.

I regularly teach a knot theory class. Every time, students ask about applications. What should I say?

I have two off-the-cuff replies when students ask. The first is that knot theory is a treasure chest of examples for several different branches of topology, geometric group theory, and certain flavours of algebra. The second is a list of engineering and scientific applications: untangling DNA, mixing liquids, and the structure of the Sun's corona. I'm interested hearing about other applications. I am also interested in hearing your take on the pedagogical issues involved. Thank you!

If I may steal some thunder from Peter Shor, his paper, Quantum money from knots (with Edward Farhi, David Gosset, Avinatan Hassidim, and Andrew Lutomirski) relies for the security of its "quantum money scheme" on

the assumption that given two different looking but equivalent knots, it is difficult to explicitly find a transformation that takes one to the other.

The Alexander polynomial plays a prominent role in the paper.

I think historically one of the big formal motivations for knot theory were things like the Brieskorn varieties, i.e. looking at solutions to equations of the form

in $\mathbb C^n$, for various $p_k$. $0$ is generally a singular point and one way to study it is to intersect the variety with a small sphere centred about $0$. In the $n=2$ case you get knots in spheres, in many cases you get homology spheres (sometimes homotopy-spheres) knotted in spheres. The knot type informs on the singularity.

In the $n=3$ case you get the 3-dimensional Brieskorn varieties. By forgetting various coordinates this expresses the Brieskorn manifolds as branched covering spaces of $S^3$ branched over a knot. So again knots arrise. Looking at M.Epple's "Geometric aspects in the development of knot theory" apparently this perspective on branched coverings and knots goes back to Wirthinger (1895).

This perspective is well written-up in Milnor's "Singular points of complex hypersurfaces" and pursued further in Eisenbud and Neumann's "Three-dimensional link theory and invariants of plane curve singularities".

If you manage to convince your students that smooth manifolds are among the most beautiful and interesting objects in mathematics, expecially dimensions 3 and 4 that model our universe, then you can say that (among other things) knots form a fundamental ingredient in understanding and constructing such models.

For instance, you can tell that by removing a (well-chosen) knot from $S^3$ we can get the simplest possible universe with a hyperbolic geometry having finite volume. Or that every 3-manifold may be constructed by removing and "regluing" (finitely many) knots.

here I'm thinking of $SO_2$ as the unit complex numbers.

Anyhow, the "high point" of this cycle of observations is that the free orbits of this action on $S^3$ are trefoil knots. http://www.msp.warwick.ac.uk/agt/2002/02/p043.xhtml

Depending on what path you take maybe you're not using any knot theory at all for this, but the fact that a non-trivial knot arises naturally IMO is pretty cool. I believe the trefoil comes up in a few other branches of mathematics quite naturally.

Constructing invariants of knots is also related to constructing 3d topological quantum field theories. A good reference for these kinds of connections might be Kauffman's Knots and physics. The related notion of a tangle turns out to be related to continued fractions and $\text{SL}_2(\mathbb{Z})$. There is another connection (which may or may not be the same connection) involving the Lorenz attractor.

It's still a bit of a far cry, but literary scholars are looking for more and more visualization tools to help them compare and contrast large sets of self-similar stories (like the countless variations on the Grail Quest, or the ~350 existing Cinderella stories). One tool I'm trying to develop makes use of braid theory, a subbranch of knot theory, to chart the history of speech-acts between characters -- if strand A passes over strand B, it means character A speaks to character B, and vice versa. The result is often, and expectedly so, messy. But, applied on a single story for all of the speaking characters, it can prove valuable by exposing patterns of speech-acts, moments of conversational dominance (where one thread supersedes all the others), and a number of other visually obvious phenomena that might otherwise have been overlooked. Plays and oral stories prove particularly good subjects. Applied on a slough of stories, a whole data set, especially stories that are supposed to tell the same tale likes the ones mentioned above, it can prove pretty useful.

Check out the linked TEDx talk for more details: http://www.tedxsmu.org/talks/arnaud-zimmern-braiding-red-riding-hood-tedxsmu-spring-2014/

Along the lines of Kelvin's idea, discussed in the comments, Buniy and Kephart wrote a speculative paper in 2002 that the mass spectrum of glueballs in QCD might be related to the spectrum of lengths of tightened knots. Here's a figure from their paper, comparing some experimental masses to lengths of some knots: 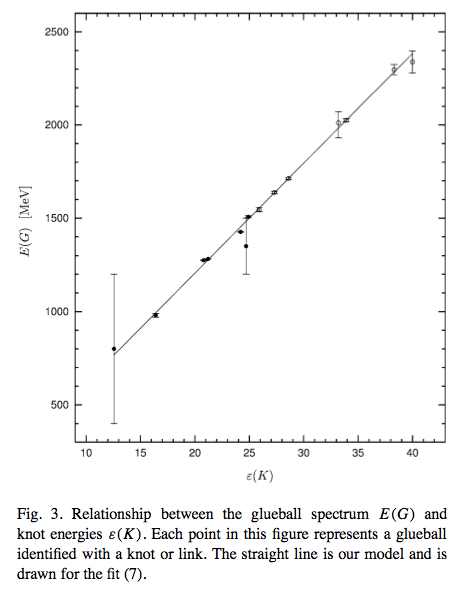 The model in their paper argues that the mass of a glueball (viewed as some kind of flux tube) should be proportional to the length of the tube, and hence the knot energy considered here is the ropelength of knots.

I'm not an expert on QCD so take all of the following with a grain of salt.

Before you get too excited, this model so far as I can tell is based on some phenomenological considerations, not QCD itself, and furthermore, their identifications of glueball states with knots is just the best fit of some experimental masses to corresponding entries in a table of knot lengths. As the final section of their paper says, there are some knots without measured glueball states, more importantly, it's my impression that QCD is not understood well enough to confirm that these measured masses are indeed all glueballs, e.g. the state at 1270 MeV also has a quark model interpretation.

Freedman et al. considered the energy of orbits of a divergence-free flow (such as a magnetic field), and obtain lower bounds on the energy in terms of knot invariants. However, I'm not sure this is strictly an application (even to another area of science), since I'm not sure if their estimates have been applied to a concrete physical experiment.

See some some knots and links as sculptures here1 and here2. Students should also learn, indeed should be taught, to see mathematics in the context of human development, and knots must surely be the oldest applied geometry, used for making baskets, fishing nets, rafts, clothing and housing, etc.

The advantage I found in teaching knot theory, as against say homology theory, was that the basic problems could be stated at the beginning, and some methods were given, relating as said above to other nice mathematics, for some measure of solution. So students were able to see the point of the course.

Not the answer you're looking for? Browse other questions tagged teaching knot-theory gt.geometric-topology or ask your own question.

76
What computational problems would be good proof-of-work problems for cryptocurrency mining?
10
Applications of knot theory to biology/pharmacology