Ellipse naturally associated with a polygon

My colleagues and I have stumbled onto a way to associate an ellipse, or equivalently a positive definite symmetric matrix, to a polygon that is different from other better known ways. We want to know if anyone has ever seen this before. Before describing this, I do want to note that there are other well-known ways of associating an ellipse to a polygon, including the matrix of second moments of the uniform distribution supported on the interior of the polygon and the so-called John ellipses, which are the ellipse of largest volume inscribed in the polygon and the one of smallest volume circumscribing the polygon.

The ellipse $E_P$ can in fact be defined without using the inner product and is a linear invariant of the polygon $P$. Its definition can be extended to any body $P$ containing the origin with a sufficiently regular boundary. It is an example of a matrix-valued valuation on the set of all convex bodies that contain the origin in their interior. Its volume is maximized if and only if the body $P$ is itself an ellipsoid centered at the origin.

Does anyone recognize this association of an ellipse to a polygon? I would be grateful for any information or references.

This observation, however, makes the existence of a scale-invariant ellipsoid associated with the polygon much less surprising.

I am confused: is this not the construction in:

This is hopefully the last (4th) edition of my answer. I spend few hours in calculations which could be dismissed would I think a bit before doing them. I believe that now I understand what happens and what most of you probably knew before.

First of all, there exists no canonical construction $K\mapsto E_K$ of an ellipse by a convec body (I understand canonically as ``depends only on the linear structure and on $K$'') such that it satisfies $E_{tK} =E_K$. The reason is that this would imply the existence of a canonical euclidean structure in a 2-dimensional space equipped with a linear complex structure, which is wrong because the group of the linear transformations preserving a complex structure is bigger than the group of linear transformations preserving a euclidean structure.

Indeed, consider a two-dimensional linear complex structure on $\mathbb{R}^2$, i.e., fix a matrix $J$ such that $J^2= -1$. The group of linear transformations preserving the complex structure evidently contains the scalings $(x,y)\mapsto \textrm{const} \cdot (x,y)$ and therefore can not preserve any euclidean structure.

Suppose there exists a canonical construction of an ellipsoid $E_K$ by a convex body $K$ such that it behaves as follows w.r.t. to linear transformations: for every linear transformation $A$ with $det(A)= 1$ we have $A E_K = E_{AK}$; for every scaling $S:\mathbb{R}^2 \to \mathbb{R}^2$, $(x,y)\stackrel{S}\mapsto \textrm{const} \cdot (x,y)$ we have $E_{SK}= E_K$. Then, we can construct a canonical scalar product on our $\mathbb{R}^2$. Indeed, having $J$, we have a canonical notion of a circle centered at $\vec 0$. More precisely, in every real linear 2dim-space we have the notion of an ellipse. A circle around $\vec 0$ is an ellipse which is $J-$invariant. As you see, in order to define an ellipse we used the linear structure of $\mathbb{R}^2$ and the complex structure $J$ only, so any linear transformation that preserves $J$, in particular every scaling $(x,y)\stackrel{S}\mapsto \textrm{const} \cdot (x,y)$ takes a circle centered at $\vec 0$ to a circle centered at $\vec 0$. round

Now suppose your construction $K\mapsto E_K$ exists. As $K$, take the round ball centered at the origin. The freedom in choosing such a convex body is its scaling $K\mapsto \textrm{const}\cdot K$; if the construction do not depend on scaling we obtain that the freedom in choosing such a convex body does not affect the ellipse $E_K$ (which must also be a circle because of the symmetry) we obtain a canonical inner product on $(\mathbb{R}^2, J)$. There is no such product though, by the reasons I explained before: the group of complex transformations is bigger than the group of the orthogonal transformations.

Thus, there is no hope to construct a scaling-equivarinat and linear-transformations-invariant ellipse by a convex body in $\mathbb{R}^2$, so it must something be wrong with the announced properties of the construction from the question. I should confess that first I thought that the problem is with the invariance of the construction w.r.t. linear transformations, and bothered Deane and you all with attempts of counterexamples.

Actually, since the construction is indeed invariant w.r.t. to linear transformations with determinant $1$, one can think that the information we need from the euclidean structure is its volume form only. This was pointed out by Deane to me in one of his comment, with a hint that normally should be sufficient for me to understand everything without doing the calculations. It is also stays inexplicit in the edited version of Deane's question.

Now, if you do not require the property $E_{tK}= E_K$, there exist tons of canonical constructions of an ellipse by a convex body. You even can do these construction the whole-affine-group-invariant, by first moving the body such that its barycenter is located in the origin of the coordinate system you are doing the construction starting from. 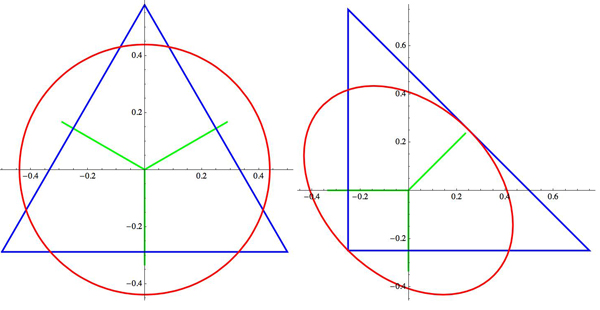 Not the answer you're looking for? Browse other questions tagged convex-geometry convex-polytopes integral-geometry dg.differential-geometry or ask your own question.

9
surfaces of constant centro-affine curvature
12
Volume-like property to upper bound lattice points in a convex body
5
A question of compactness in the geometry of numbers
6
Shortest geodesic loop vs. shortest periodic geodesic
2
Polygon of convex arcs
7
Help with definition of Liouville measure
1
What are the John ellipsoids for a pair of (9- and 15-dimensional) convex sets of $4 \times 4$ positive-definite matrices?
Question feed