Just reading about the Mertens-function in the other thread Mertens function I remember an earlier attempt to apply divergent summation to the series which is constructed of the Moebius-function at consecutive arguments, or in other words of which the Mertens-function-values represent the partial sums.

Eulersummation, although relatively poorly adapted, suggested that the (divergent) sum should be meaningfully evaluated to -2. But that sequence of partial sums (although seldom exceeding only the squareroot of its current index) seems to be a specific difficult case for such common summation methods - the approximation is relatively poor even for 128 terms. I tried Nörlund-means/Cesaro-sum, Euler-sums of different orders and also a selfmade matrix summation-method using the eulerian numbers (with which I could -on the other hand- well handle the even strongly diverging $ 0!-1!+2!-3!+...$ -series), but I tried not yet for instance Abel and Borel.

Q2: And how could it be determined whether the Cesaro- and/or Euler-summation are at all capable to evaluate that series to a final value? 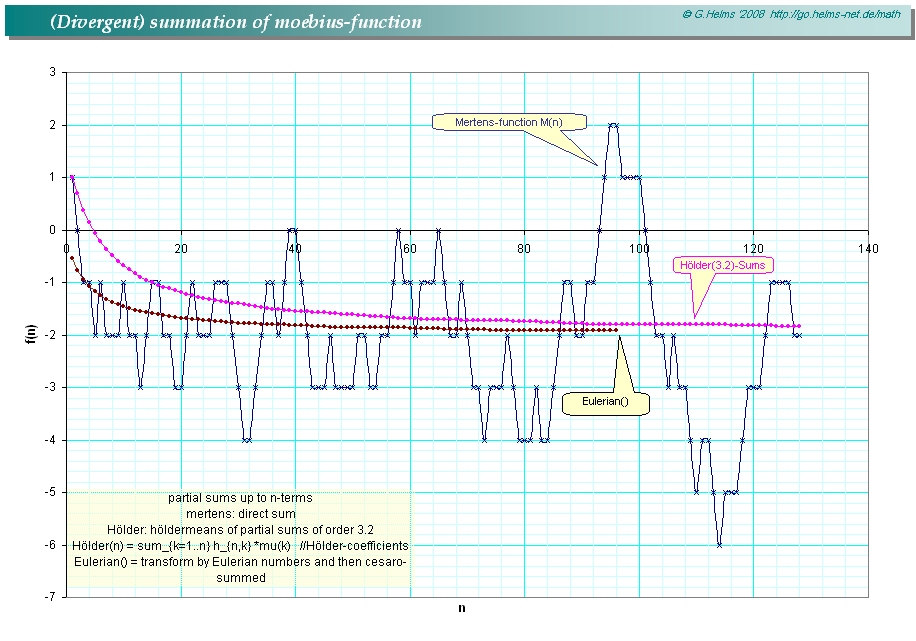 I should add that this is a trick often used in analytic number theory (for instance in Eisenstein series). More generally given a divergent sum $$S=\sum_{i\in I}a_i$$ then consider, for an appropriate choice of weights $b_i>0$ the series $$f(s)=\sum_{i\in I}\frac{a_i}{b_i^s}.$$ We hope this converges in a suitable half-plane and can be analytically continued to $0$. Then we "define" $S=f(0)$.

Not the answer you're looking for? Browse other questions tagged sequences-and-series divergent-series nt.number-theory or ask your own question.

28
Summation methods for divergent series
25
Do Abel summation and zeta summation always coincide?
8
Summing a divergent series and a constant combined
4
Is that series-transformation known in the context of divergent summation?
9
Values of the Riemann zeta function and the Ramanujan summation - How strong is the connection?
2
How to rewrite this totient summation in terms of Mertens?
8
What are some geometric / physical / probabilistic interpretations of the Riemann zeta function at integer arguments n ≤ 1?
13
Cesaro(?)/Euler(?) - summation of the $s(p)=\sum_{k=0}^\infty (-1)^{H(k)} (1+k)^p$ for $p=1,2,3,...$ (where $H(k)$ is the Hamming-weight)
11
If the generating function summation and zeta regularized sum of a divergent series exist, do they always coincide?
3
A proposition for summing divergent series, but how should partial summation be defined at non-natural values?
Question feed