In a recent paper with Alex Arkhipov on "The Computational Complexity of Linear Optics," we needed to assume a reasonable-sounding probabilistic conjecture: namely, that the permanent of a matrix of i.i.d. Gaussian entries is "not too concentrated around 0." Here's a formal statement of our conjecture:

This conjecture seems interesting even apart from our application, so I wanted to bring it to people's attention -- maybe there's a simple/known proof that we're missing!

Here's what we do know:

Short of proving our anti-concentration conjecture, here are two easier questions whose answers would also greatly interest us: 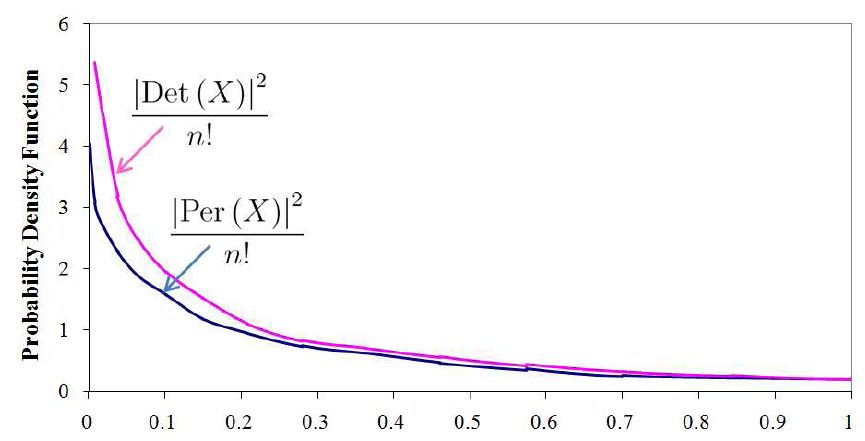 I did a preliminary feasibility analysis of our methods and it appears possible that one may be able to tighten our $n^\epsilon$ loss to something more like $\exp( \sqrt{n} )$ in the Gaussian case, but this is still well short of what you want. The main obstacle is potential coupling between permanents of minors, which we were not able to fully avoid.

Now we come up against the key problem: the $P_k^{(i)}$ are identically distributed, but are not jointly independent, because there is a huge amount of overlap between the $k \times k$ minors. So, while heuristically one expects concentration of measure to kick in and make $(\sum_{i=1}^{k+1} |P_k^{(i)}|^2)^{1/2}$ more concentrated than any one of the $P_k^{(i)}$, we don't know how to prevent huge correlations from happening. In the worst case, all the $P_k^{(i)}$ are perfectly correlated to each other, and then (1) could become something more like

But this worst case can't actually be the truth - among other things, it contradicts the second moment calculation. So there should be some way to prevent this correlation. Unfortunately, my paper with Van completely evades this issue - we try to get as far as we can just from the obvious fact that disjoint minors are independent from each other. This is why our bounds are significantly worse than $\exp(O(\sqrt{n}))$ from the truth.

As you say, the situation is much better for the determinant of a Gaussian iid matrix. Here, we can use the base-times-height formula to express the determinant as a product $\prod_{i=1}^n \hbox{dist}(X_i,V_i)$, where $X_i$ is the $i^{th}$ row and $V_i$ is the span of the first $i-1$ rows. With everything being Gaussian, $\hbox{dist}(X_i,V_i)^2$ is a chi-squared distribution, which is a martingale in $i$, and as a consequence one can get the determinant within $\exp(O(\sqrt{\log n}))$ of $\sqrt{(n-1)!}$, which would give you what you want. Unfortunately, there is nothing like the base-times-height formula for the permanent...

Not the answer you're looking for? Browse other questions tagged random-matrices pr.probability or ask your own question.