My question is whether one can mimick substantial parts of this argument for $\nu$. Here is what I already know and what not:

I know that this result goes back to Serre, but I cannot find a detailed computation in his papers and it seems that the calculation using the Postnikov-tower and the Serre spectral sequence is a bit lengthy. There are three other approaches I know but they are much less elementary: Adams spectral sequence, J-homomorphism (enough to show that the order of $\nu$ is $24$), framed bordism (supported by things like Rochlin's theorem and Hirzebruch's signature formula).

You said you don't want to talk about framed manifolds, but that's a good way of seeing the 24. $\nu$ is represented by $SU(2)$ in its invariant framing. Take a K3 surface. It's framed, and it has Euler characteristic 24. Take a vector field that has 24 isolated zeroes of index 1. If you cut out a little disk around each of these 24 zeroes, the boundary will be an $S^3 = SU(2)$ with its invariant framing. So the K3 surface minus these 24 little disks is a null-bordism of $24\nu$. Probably not suitable for your course, as you would have to explain framed bordism and K3 surfaces, but cute nonetheless I think. By the way, the analog for $\eta$ is the two-sphere (Euler characteristic 2).

This is really a comment try to make clear the point Tilman was trying to make but it is too long. A K3 surface has trivial canonical bundle (after all that and simple connectivity is the definition) and hence the bundle of self dual two forms is trivial (since on a complex surface we have $\Lambda^+= \Lambda^{2,0} \oplus R \omega$, $\omega$ being the Kahler form). In fact is follows from Yau's theorem that K3 surfaces admit hyperkahler metrics so there is a metric where the Levi-Civita connection is trivial on $\Lambda^+$.

Two forms act on vector fields on a four-manifold via contraction then duality under this actions self-dual forms act like imaginary quaternions (so quaternions do figure in the story). Thus taking a orthonormal basis of self-dual forms $\omega_1,\omega_2,\omega_3$ and your vector field $X$ you get a framing (not stable) away from the zeros of $X$, by looking at $(X,(\iota_X \omega_1)^*,(\iota_X \omega_2)^*,(\iota_X \omega_3)^*)$. Then arrange that the vector field is pointing out around each little 3-sphere surrounding a zero then you see that the induced framing of each little sphere is the Lie-group framing. If each zero of the vector field is a source then there are 24 zeroes (that is the Euler characteristic of a K3).

I believe this observation is due to Atiyah.

Not an answer, but a cute thing that might be relevant for your question:

Here's another nice way of seeing that $\eta$ is stably of order two.
We use the Thom-Pontryagin constuction to identify $\pi_3(S^2)$ with the cobordism group of framed 1-manifolds in $\mathbb R^3$ (the framing is on the 2-dimensional normal bundle). The element $\eta$ corresponds to the unknot, with a framing that ``twists once''.

Now, the stable homotopy groups of spheres form a ring in which the integer multiples of the unit are central (!). So, from the equation $2\circ \eta=\eta\circ 4$ we can deduce that $2\eta=0$ stably.

There is a "half-geometric" observation that since $$ \pi_3^s\cong H_3(\tilde A_N),\ N\gg0 $$ where $\tilde A_N$ is the universal central extension of the $N$th alternating group, elements of $\pi_3^s$ might be described by certain 3-cycles (hopefully of geometric origin).

Seemingly this geometry is easier to discern after the embedding $\tilde A_N\hookrightarrow\mathrm{St}_N(\mathbb Z)$ into the Steinberg group of the integers.

In "The generalized Grassmann invariant" (late 70ies) K. Igusa introduced technique of pictures to construct a homomorphism $$ \chi:K_3(\mathbb Z[\pi])\to H_0(\pi;\mathbb F_2[\pi]); $$ in his own words, "The definition of $\chi$ comes from very intuitive geometric considerations, but unfortunately the algebraic analogue is rather clumsy." 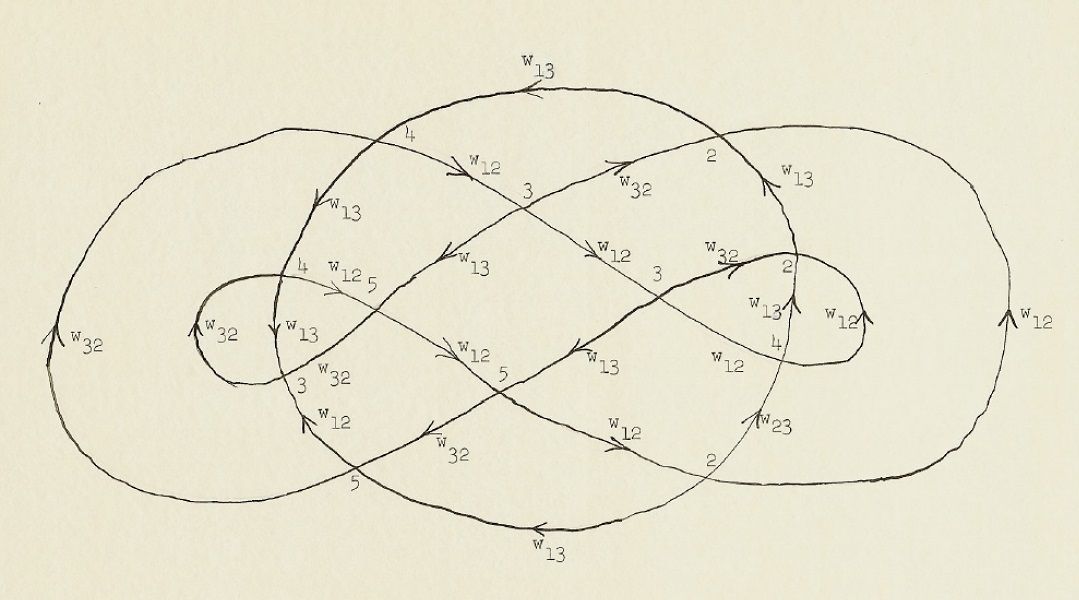 I am sorry to repeat a selfpromoting text I metioned at some other place of MO, but my paper below is addressed precisley to the computation of $\pi(3)$ by geometry (immersion theory).

The paper: A. Szűcs: Two theorems of Rokhlin. This gives the computation of π(3) by elementary tools.

But it uses the following non-trivial fact: The 3-dimensional spin cobordism group is trivial.

You can read a proof of this latter in the same issue in the paper by A. Stipsicz.

But a more simple proof for this is in:

The Froisart-Morin eversion of a $2$-sphere can be capped off at either end to give an immersed $3$-sphere in $4$-space. It has one quadruple point, a closed curve of triple points, and its double point set is a non-orientable surface (connected sum of 3 projective planes. By combining results of Koschorke from about 1979-1982, one can see that the multiple point invariants (Kahn-Priddy maps) give that this sphere is a generator of the ${\mathbb Z}/(24)$. Also, Koschorke's figure-8 construction applied to Boy's surface coincides with a map on stable homotopy that maps the ${\mathbb Z}/(8)$ injectively to the ${\mathbb Z}/(24)$.

An alternate view of the generator of $\pi^s_2$ is to take an immersed generic projection of the standard (tropical) torus from $4$-space into $3$-space. I have played with this in mathematica, linear projections yield surfaces with 4 branch points, so the torus has to be perturbed in $4$-space before projecting. If you take a figure 8, multiply it by an interval, and then put a full twist in it, you get the mod-2 generator. The belt trick undoes two full-twists.

65
Is there an octonionic analog of the K3 surface, with implications for stable homotopy groups of spheres?
32
Nilpotence of the stable Hopf map via framed cobordism
35
Finding the octonionic analog of the K3 surface, via (almost) hyperkahler geometry?
19
Vector field on a K3 surface with 24 zeroes
29
Cohomology of symmetric groups and the integers mod 12
6
How to prove that Lie group framing on S^1 represents the Hopf map in framed cobordism
5
Centralizers in the universal central extensions of the alternating groups?