Essentially one random metric on $\mathbb{S}^2$?

I heard it claimed that there is, in some sense, only one random metric on $\mathbb{S}^2$. I would appreciate any pointer to literature that explicates this intriguing claim. So far my own searches have not struck a suitable source. I don't know enough about the topic to even define what constitutes a random metric in the context of this claim, so I cannot ask a sharper question. I seek references to learn more. Thanks!

Addendum. Reading the literature kindly suggested by jc, I believe that the source is the work of Jean-Francois Le Gall, and in particular, his paper "The topological structure of scaling limits of large planar maps" Invent. Math. 169 (2007), no. 3, 621--670 arXiv:math/0607567v2 math.PR. He shows that a random quadrangulation converges in the Gromov-Hausdorff metric to a limiting metric space. Here is a quote from Le Gall's lectures at Clay Inst. on the topic:

This limiting random metric space, which is called the Brownian map, can be viewed as a "Brownian surface" in the same sense as Brownian motion is the limit of rescaled discrete paths. The Brownian map is almost surely homeomorphic to the two-dimensional sphere, although it has Hausdorff dimension 4.

I'm not sure if this is what is being referred to, but there is a notion of random planar maps which are random triangulations of the sphere and the "scaling limit" of large triangulations is expected to yield a random metric space with the topology of $S^2$ (called the "Brownian Map") though this has not yet been completely proved. Various funny results are known though, such as that $S^2$ with this random metric has Hausdorff dimension 4. 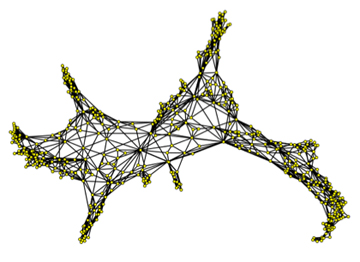 update of April 10, 2011: Grégory Miermont has posted a preprint claiming a proof of the result I was vaguely describing above for quadrangulations, rather than triangulations (see the final section of his preprint for thoughts on "universality"). According to the introduction, Jean-François Le Gall has also proven a similar result with a different method recently as well. The abstract:

We prove that uniform random quadrangulations of the sphere with $n$ faces, endowed with the usual graph distance and renormalized by $n^{-1/4}$, converge as $n\to\infty$ in distribution for the Gromov-Hausdorff topology to a limiting metric space. We validate a conjecture by Le Gall, by showing that the limit is (up to a scale constant) the so-called {\em Brownian map}, which was introduced by Marckert & Mokkadem and Le Gall as the most natural candidate for the scaling limit of many models of random plane maps. The proof relies strongly on the concept of {\em geodesic stars} in the map, which are configurations made of several geodesics that only share a common endpoint and do not meet elsewhere.

Not the answer you're looking for? Browse other questions tagged reference-request mg.metric-geometry or ask your own question.