What recent discoveries have amateur mathematicians made?

For a definition of amateur:

I think that to make the term "amateur" meaningful, it should mean someone who has had no formal instruction in mathematics past undergraduate school and does not maintain any sort of professional connection with mathematicians in the research world. – Harry Gindi

About ten years ago Ahcène Lamari and Nicholas Buchdahl independently proved that all compact complex surfaces with even first Betti number are Kahler. This was known since 1983, but earlier proofs made use of the classification of surfaces to reduce to hard case-by-case verification.

Greg Egan. He's a very renowned science fiction writer who holds a bachelor degree in mathematics. He wrote, as a coauthor, 2 articles which were published in peer-reviewed journals, one of them is with John Baez. The first one was written when he was approximately 40 years old.

There's also more eccentric example of Andrew Beal, which is much more known in the world of poker. He made however one minor conjecture in number theory for whose proof or disproof he offers $100,000.

Edit: (nov-2018) Some recent progress by G. Egan has been made with an anonymous 4chan-member, on a problem on permutations.

Aubrey de Grey, The chromatic number of the plane is at least $5$ (on the arXiv in April 2018)

Apparently, de Grey is a famous biogerontologist and he attacked the mathematical problem in his spare time.

Kenneth A. Perko Jr. is a lawyer and an amateur topologist (with graduate-level training). In 1974 he found that two knots that were listed as separate knots in C. N. Little's "On knots, with a census for order 10" (1885) and similar tables, were actually identical.

Little (with Tait and Kirkman) compiled his tables combinatorially. He drew all possible 4-valent graphs with some number of vertices (in this case 10), and resolved 4-valent vertices into crossings in all possible ways. He ended up with 210 knots. Then he worked BY HAND to eliminate doubles, by making physical models with string. He failed to bring these two knots to the same position, and concluded that they must be different. It took almost 100 years to find the ambient isotopy which shows that there are the same knot. 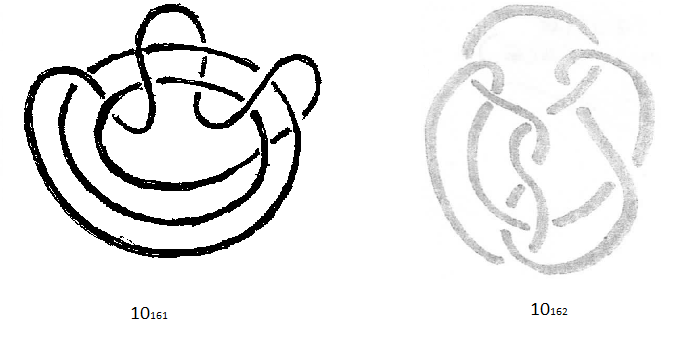 An anonymous poster of a 4chan messaging board, in thinking about how long it would take to watch a 14-episode nonlinear anime program in any order, improved the lower bound for a length of a superpermutation. A superpermutation is a string that contains each permutation of $n$ elements as a substring. See OEIS A180632. Superpermutations are somewhat similar to De Bruijn sequences.

Whether the anonymous poster meets the definition of "amateur" may never be known, but the posting was from 2011, and apparently was noted by a handful of other mathematicians who think about these things not long afterwards.

The story has taken off in the public recently in part because Greg Egan, who was previously mentioned, has also in October 2018 improved the upper bound on the length of a minimal superpermutation.

Quanta Magazine has a nice article as well.

While this is on the front page again, I wanted to make mention of Joan Taylor, who discovered an aperiodic single tile, which she published with Joshua Socolar of Duke University in 2010. This is her bio blurb as it appears on their article in The Mathematical Intelligencer:

JOAN M. TAYLOR took up mathematics in 1991 at age 34 after being inspired by a magazine article on quasicrystals featuring Penrose’s rhombus tiling. She began but did not complete a degree, preferring to conduct her own research. Since then she has pursued tiling and related topics in abstract algebra and number theory including original work on constructible polygons. She likes to unwind with knitting and reading.

There are many interesting discoveries made by mathematical distributed computing projects.

Their discoveries don't have an impact in the same way that theorems do, but from time to time resolving a theorem boils down to computation, and most of the participants are probably interested amateurs.

Eugène Ehrhart was a high school teacher when he discovered the so-called Ehrhart polynomial, at the age of 55. He got his PhD at the age of 60.

Let $\Delta$ be a polytope with integral vertices in $\bf R^d$. Then there exists a polynomial $P$ such that for every integer $n$, $P(n)$ is the number of integral points in $n\Delta $. This polynomial satisfies a duality property: $(-1)^dP(-n)$ is the number of integral vertices in the interior of $P$. This duality property has been interpreted as Serre duality on toric varieties by Khovanskii in the 80's. The geometric interpretation of the coefficients of $P$ is still an open problem despite a huge literature. See http://icps.u-strasbg.fr/~clauss/Ehrhart.html for a short bibliography, and https://en.wikipedia.org/wiki/Ehrhart_polynomial for an introduction to the subject.

Bill Gates co-authored the following paper in the 1970s with Christos Papadimitriou:

Not sure if Gates counts as an amateur, but he is at least a college dropout. :)

The only reason I know this is because once I ran across a book or article that discusses the results in this paper and then says something like, "Yes, this is THE Bill Gates." I was almost certain the book or article was by Knuth, but now I can't find the reference in any of my Knuth books. If someone else knows the reference I'm talking about, I would be grateful if they would post it as a comment to my answer. (It now bothers me that I can't find that reference. :) )

Robert Ammann had some extremelly important contributions to the study of aperiodic tilings, and to Quasi-crystals.

The important artists Anthony Hill and John Ernest proposed an upper bound for the crossing number of complete graphs (published by Richard Guy in 1960). Hill made other contributions to graph theory and was elected to the London Mathematical Society in 1979.

His ideas also led to the development of Heegner points, which are very influential in modern number theory.

In 2017, a counterexample to Conway's $1,000 conjecture “Climb to a Prime” was discovered by James Davis, “not a mathematician by any stretch”. (details)

Also in 2017, Dmitry Zakharov (then a 9th grader!) published a new bound for the 1962 problem of Danzer and Grünbaum, particularly improving a result of Erdős. His proof is elementary and takes just half a page!

The composer Kieren MacMillan has written a few papers (see his postings on the arXiv) which prove some identities involving power sums by elementary means.

I suppose that it is in collaboration with a professional mathematician, but I think that he reasonably still counts as an amateur.

(Full disclosure: He is also a friend of mine)

An old problem of Lebesgue circa 1914 asks what convex shape of smallest area can cover any planar set of diameter one. Upper bounds on the area of such a set have recently been improved to $a\leq .8440935944$ using elementary methods by Philip Gibbs in October of 2018. The pre-print is here and a Quanta article about the recent developments can be read here.

how about saul kripke?

kripke-platek set theory "is used all over the place, in recursion theory and set theory, [b]oth in classical results, and in fairly recent ones."

modern philosophers (of science, mathematics, language etc. -- analytical philosophers) are probably a rich source of the list you seek. many do not have above-undergrad training in math, although i would use the definition of 'amateur' that we think of when we think of the ancients. that is, people who are distinctly in another field but make contributions to mathematics as part of their work or hobby.

as for other philosophers/logicians (off the top):

i know that by the time we get to someone like ramsey, everyone's like: "surely that's not an amateur mathematician" but by the definition given in the question, i think he fits.

at any rate, you can probably find the names you're looking for in analytical philosophy, (mathematical/computational) economics/biology/linguistics, and so on.

the problem, i suspect, will be (in addition to the definition of 'amateur' which is not too difficult in my opinion, as long as you are satisfied with it for your list) the definitions of 'important' and 'discovery'. for example, i've known about kripke's contributions for a while but i don't know, even now, whether this community considers them as important.

There was a nice bit of mathematical modeling carried out by a professor of Law, John F. Banzhaf III.

He (re)created a power index in voting, which is better discussed on its wikipage: Banzhaf power index.

For Banzhaf's own work, see his paper:

Incidentally, his particular approach was first formulated by Penrose (1946), then by Banzhaf (1965), and then yet again by Coleman (1971), thereby making it a potential candidate for the MO post about re-discovered (and re-published) works.

The mathematics around voting (the pinnacle being, perhaps, Arrow's impossibility theorem) provides other examples of amateur mathematicians at work. Consider, in particular, approaches to apportionment due to United States politicians John Quincy Adams, Alexander Hamilton, Thomas Jefferson, and Daniel Webster. (I omit further discussion of these latter examples, since they are arguably not "recent.")

I don't know if this really qualifies, but I would say that Scott Draves can be viewed as an amateur mathematician for inventing/discovering the fractals known as Flame fractals. His work is more towards art, but there is a decent amount of math behind to optimize the aesthetically properties of the fractals. (The "nicest" fractal dimension is 1.52, for example).

Richard Friedberg, then an undergraduate pre-medical student, independently solved Post's problem (of whether there are intermediate Turing degrees) by the priority-injury method. This was a significant open problem at the time, so the result made news:

I do not know if you have heard that “Post’s problem”, whether there are degrees of unsolvability among problems of the form (∃y)φ(y, x), where φ is recursive, has been solved in the positive sense by a very young man by the name of Richard Friedberg. The solution is very elegant. Unfortunately, Friedberg does not intend to study mathematics, but rather medicine (apparently under the influence of his father).

The American Institute of Mathematics, a nonprofit organization, was founded in 1994 by Silicon Valley businessmen John Fry and Steve Sorenson, longtime supporters of mathematical research.

That's Fry, as in Fry's Electronics, a retail chain in California.

In 2002, Manindra Agrawal, Neeraj Kayal, and Nitin Saxena proved the amazing result "PRIMES is in P," i.e., there is a deterministic, polynomial time algorithm for determining whether a given number is prime or not. The resulting paper was published in the Annals in 2004. The story was covered in the New York Times. The trio won the 2006 Fulkerson Prize, and the 2006 Gödel Prize.

In 2002, Kayal and Saxena were undergraduate students. I'd say that counts as "amateur."

The dentist Leon Bankoff, who died in 1997, published several mathematical papers. He has an Erdos number of 1. He has Wikipedia page. Here is a link to an interview of him by G.L. Alexanderson.

222
Most interesting mathematics mistake?
56
Prominent non-mathematical work of mathematicians
112
Mathematicians who were late learners?-list
103
The half-life of a theorem, or Arnold's principle at work
40
Is amateur research in mathematics viable?
43
Mathematics as a hobby
46
Is Lebesgue's "universal covering" problem still open?
31
Similarities between Post's Problem and Cohen's Forcing
8
famous papers/results by non professional mathematicians

42
What are some examples of narrowly missed discoveries in the history of mathematics?
167
Proposals for polymath projects
56
What advantage humans have over computers in mathematics?
83
Has incorrect notation ever led to a mistaken proof?
131
Which mathematical definitions should be formalised in Lean?
Question feed