Is the number of "breakthroughs" in mathematics decreasing, as it is claimed to be in other sciences?

Is the number of "breakthroughs" in mathematics decreasing, as it is claimed to be in other sciences?

Background for the question:

A new study finds a steady drop since 1945 in disruptive feats as a share of the world’s booming enterprise in scientific and technological advancement.

Has a similar analysis been conducted for the field of mathematics (or, say, pure mathematics)? If yes, how do the findings compare?

Q: Is the number of "breakthroughs" in mathematics decreasing?

To get some quantitative feel for the question I considered the Timeline of mathematics on Wikipedia. Not all entries are "breakthroughs", but most could be considered as such. Here is a plot of the cumulative number of entries since 1900. I do notice a kink in the slope around 1965, so based on this evidence on might conclude that, indeed, the rate of discovery has decreased somewhat. Or perhaps the 1960's was just an unusually productive decade. 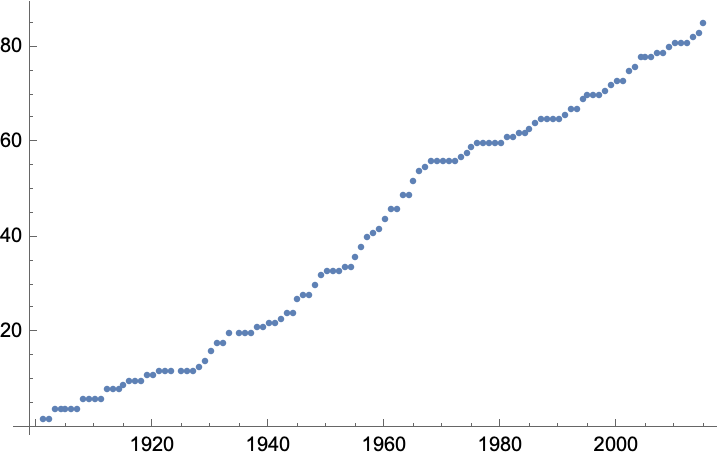 Relative to the total output the discovery rate is obviously much smaller now than in the past.

Quanta Magazine has an article on 2022's Biggest Breakthroughs in Math:

"In 2022, mathematicians solved a centuries-old geometry question, proved the best way to minimize the surface area of clusters of up to five bubbles and proved a sweeping statement about how structure emerges in random sets and graphs."

The full article describes an impressive year of results. This does not address this year in comparison to previous years' results, but it is difficult to read this review and feel that the year was in any way disappointing mathematically.

(Added). Just to give a sampling, here are excerpts from the Quanta article under "Geometry":

Similar lists are presented under the headings: the Fields Medalists' research, Number Theory, Machine Learning, Topology, Random Structures. Among the latter is a short paper (a 6-page proof that pinpointed when structure emerges in random graphs), while one breakthrough resulted in a 912-page paper showing that slowly rotating black holes will keep on rotating until the end of time.

I think that the picture is complex, and I'm sure that the two (currently) top comments by David Roberts and Brendan McKay, although providing arguments in apparently opposite directions, are both spot on.

I believe there's also another phenomenon which is worth mentioning: we generally feel more comfortable in assigning the "breakthrough" mark to works that have aged well. Without the kind of pedigree that only historic evolution can give, it's more difficult to get consensus about how large the impact of a result will be. Of course there are exceptions, like if a celebrated conjecture is proven, but for evaluating the breakthrough character of new ideas, frameworks, connections...and so on, time is usually needed.

So my two cents: in the following centuries, a non-negligible set of results, which currently are somewhat lost in the clouds, will be considered breakthroughs, as it often happened in the history of math.

If it all, I would say that the number of breakthroughs is increasing. Here is more anecdotal evidence that supports the graph posted by Carlo Beenakker. On 23rd November 2022 Terence Tao posted on https://mathstodon.xyz/@tao/109390971278692349:

It is quite easy to see why innovation is slowing down in many academic fields, as compared, say to the sixties. The sixties were a time where the population of students increased a lot in many countries, and so the number of teachers in university increased accordingly. In higher education, teaching positions come with research duties and so the number of people doing academic research increased pretty fast. China is a country where this phenomena is taking place at the moment. For many other countries however, this is over.

33
What are some applications of other fields to mathematics?
6
Applications of Koszul's formula other than the fundamental lemma of Riemannian geometry
4
Elements of the history of mathematics
15
The origins of forcing in mathematical logic and other branches of mathematics
10
Other Arabic translations of the Arithmetica
19
Did André Bloch or any other mathematician receive the Becquerel Prize?
Question feed