Partition of polygons into 'strongly acute' and 'strongly obtuse' triangles

General Question: Given an n-gon, how does one triangulate it into a finite number of strongly obtuse/ strongly acute pieces with specified cutoff - resulting in least number of pieces? And before that, how to decide whether such a triangulation exists?

Example: it seems impossible to cut a square into finitely many strongly obtuse triangles with cutoff 120.

Guess: Consider partitioning a given n-gon into strongly obtuse triangles with some cutoff greater than or equal to 120 degrees. It appears that to check if the n-gon can be so triangulated, we need to see only its triangulations using only segments connecting the vertices of the input n-gon - adding extra vertices for the triangulation does not help. And for any cutoff less than 120 degrees, any triangle and hence, any n-gon can be easily cut into strongly obtuse triangles with extra vertices.

Note: For partition into strongly acute triangles, the 'first' case seems to be a cutoff of 36 degrees.

It is, indeed, true that if we have a polygon that can be partitioned into $120^\circ$-obtuse triangles, then at least one angle of the original polygon exceeds $120^\circ$. However we may need extra vertices in the partition into $\alpha$-obtuse triangles even for a symmetric convex trapezoid. On the picture below, the angles $A,B,C$ satisfy $ A,B>C, $ so if we choose $\alpha\in(C,\min(A,B))$ we will have an admissible partition (given by red lines) but not an admissible partition without extra vertices. Thus the question of existence of an $\alpha$-obtuse partition with $\alpha\ge 120^\circ$ looks quite non-trivial, indeed. 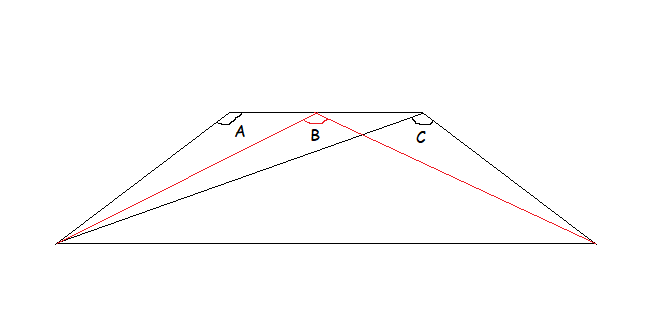 The proof is fairly simple. The first step is to upgrade the given partition to a regular one where any two triangles can share either a vertex or a full edge. That is done by triangulating the triangles having some vertices of other triangles on the boundary further. The key pictures here are 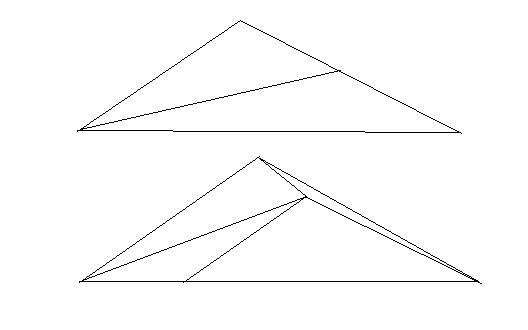 (they allow take care of one bad point a time; the top angle is the large one; in the second case the maximal angle in one of the new triangles is a bit smaller than that of the original one, but the drop is arbitrarily small, so the strict inequality survives).

The pentagon example of RavenClawPrefect is possible because he used $V_0$ for the large angles 3 times (one vertex once and one twice), which is exactly what finally compensated the undercount $V_0-2=3$ for the pentagon.

It is not the case that all strongly obtuse subdivisions with a threshold over $120^\circ$ are possible through vertex-to-vertex connections.

Consider the following dissection of a pentagon into triangles that are all very close to $10-10-160$ angles (they can't all be exactly congruent, but they're close enough for our purposes and get closer as the angles get more extreme):

The reflex angle here must be connected to at least one other vertex of the pentagon if we're to have a vertex-only dissection. But it's easy to see that both available choices yield triangles below the threshold.

1
Triangulation of polygons with all triangles having a common angle