Intersecting cylinders around a sphere

Intersecting $n$ unit-radius cylinders, each with axis through the origin, produces a shape circumscribed about a unit-radius sphere: 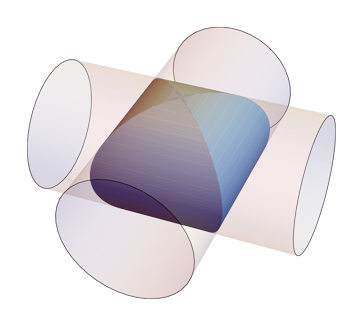 For each $n$, which arrangement of cylinders minimizes the Pompeiu–Hausdorff distance to the sphere?

For $n=3$, there are two natural candidates: orthogonal cylinder axes, and axes in a plane at $60^\circ$: 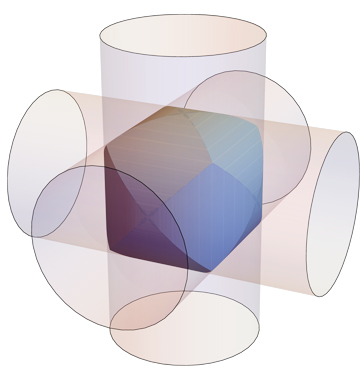 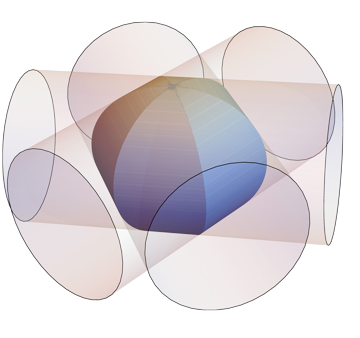 The set $Z_i$ is a zone on the sphere: a `strip' of angular width $2\alpha$. Here I use the terminology from this nice paper by Jiang and Polyanskii.

In that paper, the authors show that, if $n$ zones cover the sphere, then the sum of their widths is at least $\pi$, thus establishing Fejes Toth's conjecture. Thus, if the (equal) zones corresponding to $a_1,\dots,a_n$ cover the sphere, their widths should be at least $\pi/n$. So, for any tuple $(a_1,a_2,\dots,a_n)$ there is a vector whose angle with each of them is at most $\pi/2-\pi/(2n)$.

This shows that the $n$ cylinders rotated by equal angles aroung the same axis indeed provide an optimal arrangement.

Not a proof, but some thoughts on how to get empirical data for this problem and evidence for the optimal configuration:

Suppose we have a matrix $C$ whose rows are the unit vectors pointing in the directions of our cylinders. Then computing the Hausdorff distance amounts to finding, among unit vectors $v$ in space, the one which maximizes

If we want to approximate this with a collection of random unit vectors given by rows in a matrix $V$, then this amounts to performing some simple element-wise arithmetic on the matrix $CV^T$, which means that it's quite fast to throw into any framework for doing matrix multiplications efficiently.

I initialized $1000$ random cylinder positions (forcing WLOG the first cylinder to point along $[1,0,0]$ and the second to be in the $xy$-plane), evaluating their score by taking the maximum radius along any of $100,000$ random vectors.

I then took the best of these initial candidates, made random small adjustments to some of the coordinates, and kept the change if it improved the score. (As the changes got smaller, I started re-scoring any candidates that looked like they were the best yet, since you're also putting a lot of selection on "drawing a lucky set of random vectors" and can get unrealistically good scores.)

The winner had cylinders pointed along the following vectors:

This is very close to arranging the cylinders in a regular octagon in the $xy$-plane (and doesn't score better than doing so exactly).

Place a pin through a cylindrical straw, passing through the axis and perpendicular thereto. When you revolve the straw around the pin, you trace a sphere with the straw contained entirely outside.

Distributing $n$ cylinders at equal angles around such an axis will give a good approximation to this spherical envelope.

14
Optimal wireframe sphere
7
Any reference to an algorithm for finding the largest empty circle on a sphere (with great-circle distance)?
1
Sampling uniformly from all possible line segments of a given length that fit inside a container
4
When does the intersection of cylinders produce a ball?
5
Transport tubes in a sphere
Question feed