Perhaps surprisingly, the random variable $\ell(n)$ (with $n$ drawn uniformly from $[0,N)$) concentrates too much around $\log_2\log_2 N$ (where $\log_2$ denotes the logarithm to base $2$) to have a limiting parity probability - the variance stays bounded as $N \to \infty$, as opposed to growing to infinity. One only recovers a limiting law when the fractional part $\{\frac{1}{2} \log_2 \log_2 N \}$ of half the double logarithm of $N$ converges to a limit, and when one does so the parity probability will usually converge to a limit that deviates slightly from $1/2$.

UPDATE: after a tip in the comments, I'll remark that a refinement of the above analysis will eventually show that the distribution of $\ell(n)$ is asymptotic to the integer part $\lfloor \mathrm{Gumbel}(\log_2 \log_2 N, \log_2 e)\rfloor$ of a Gumbel distribution, in the sense that the Levy metric (for instance) between the two distributions goes to zero as $N \to \infty$ (without any further restriction on the natural number $N$). In retrospect this sort of answer was a natural guess, given the usual role of the Gumbel distribution in extreme value theory.

Some references for further reading (gathered from following links in the comments):

Here is a small visualisation of the values of this function. 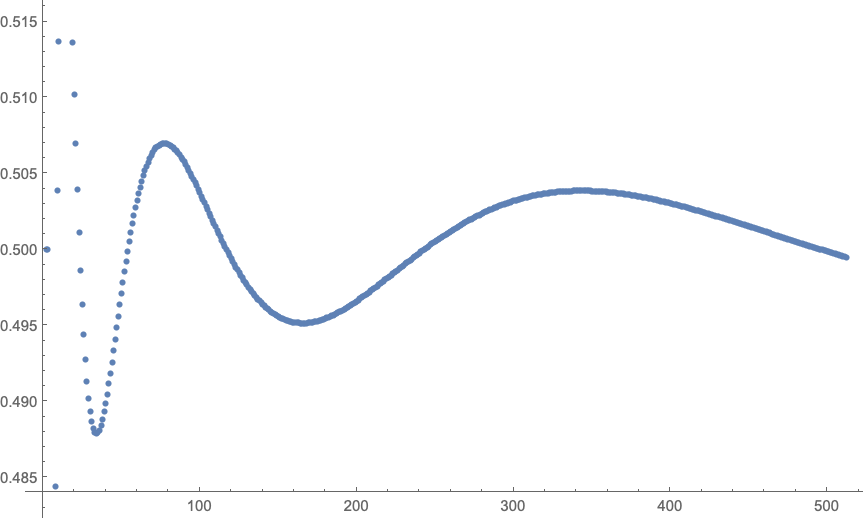 Obviously I can't compute directly the longest run for each of the integers smaller than $2^{512}$ but luckily the values can be computed symbolically.

These values are listed in the OEIS at https://oeis.org/A103421 along with a generating function that can be computed symbolically by Mathematica for a reasonable range of values.

Not the answer you're looking for? Browse other questions tagged nt.number-theory co.combinatorics digits or ask your own question.