Borel summation and the Abel function of $e^z-1$

This is a question that has bothered myself and Gottfried Helms a fair amount of late. He has made his case for the following result, but a proof escapes both of us. The question is deceptively simple, but keeps eluding each of my attempts when we get into the finer details.

This function is $2 \pi i$ periodic, and is holomorphic for $\Re(z) < 0$. We are primarily focused near the boundary point $z = 0$--where the Abel function has a singularity.

Now we can invert this to the left of zero, so that we can construct a super function $\alpha^{-1}(z)$, and by this, we can get to our function in question:

I will spare the details, but this function is also $2 \pi i$ periodic, and holomorphic for $\Re(z) < 0$. We don't need this though, just that it's holomorphic on a domain to the left of $0$, with $0$ on the boundary. This function satisfies the equation:

Gottfried first came to me with this question, and so I am not the most versed in the construction of this series, but it relates to a question which he had investigated on this forum--of the $\sin$ half iterate. But, the essential statement, is that we can construct a formal series:

Such that this series satisfies the formal manipulations:

By which this series has a radius 0 convergence (it's a divergent series).

Or, rather, could we do something similar, in the same vein that Borel summation is done.

This means, we have the function $g(z)$, which is holomorphic, and a boundary value at $0$. We have a divergent/formal series at $z=0$. If we were to take:

Will this have a non-zero radius of convergence? By which we could Borel sum the divergent series. I know I'm missing something crucial, and every attempt I've made a using traditional arguments fails because $g(z)$ is a rather anomalous function.

Unfortunately I'm not firm enough to say some definitive answer. But a short extract from the book of K. Knopp might be useful.

In his book "(...) unendliche Reihen" in chap 13 "divergente Reihen" he gives a small deal about the Borel-summation.

It is easy to see, that already for $r=2$ the expression $Q_r(x)$ converges for all $x$ when supplied with the $s_k$ of the Eulerian alternating factorial series. This establishes, that the Borel-summation can assign a meaningful value to the alternating series of factorials.

So much from Knopp.

For me the relevant part here is that we introduce the factorials in the denominators in $A(x)$ to get an Abel summable series.

Now -for our powerseries of $g(x)$- I found heuristically (looking at the first 1024 coefficients) that there is a very nice upper bound for their absolute values, and that the function providing that upper bound has not more growth-rate than the Eulerian factorial series in its terms ("hypergeometric" growth), while a bit extended by a cofactor of (only) geometric growth, which does not affect the range-of-summability of the Borel-summation. In a posting in the tetration-forum ( see here) I have this heuristic explained. For me this looked already very good to formulate the hypothese of Borel-summability of $g(x)$.

Still unfortunately - we have no general formula for the coefficients in $g(x)$ $\,^{(1)}$, so still no proof for that summability by Borel's method; only a (good) heuristic for the first so-and-so-many terms. What I think is, that we need such a formula for the growthrate of the coefficients in $g(x)$ before we can really proceed. (But here my extremely limited expertise may lead me to too defensive statements...)

$\,^{(1)}$ There is of course a simple procedure to actually compute that coefficients iteratively, but no so-to-say independent expression which allows to get a direct estimate of the upper bound of the (absolute) value depending on its index only.

Screenshots to show the estimate for the bounding function (more explanation in the tetration-forum post): 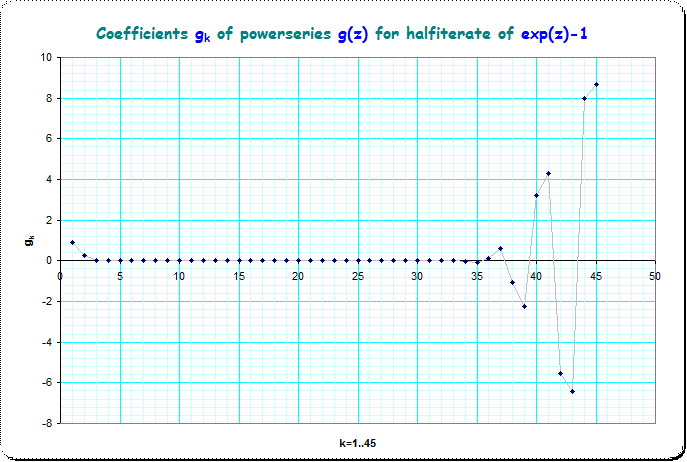 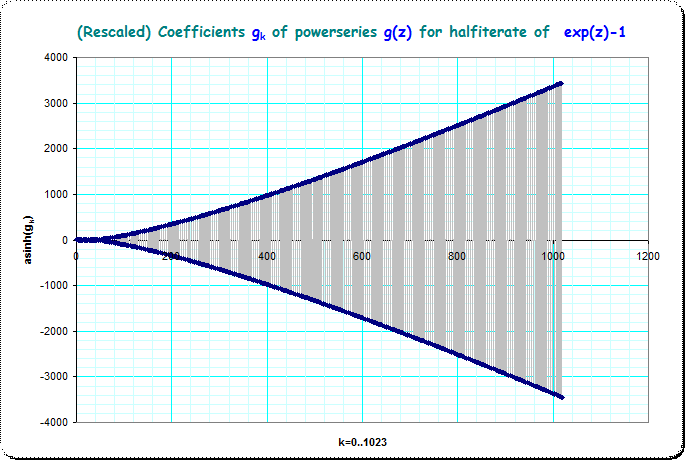 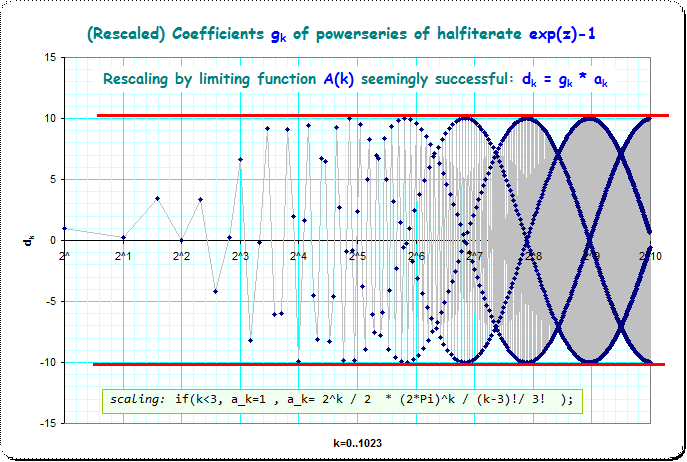 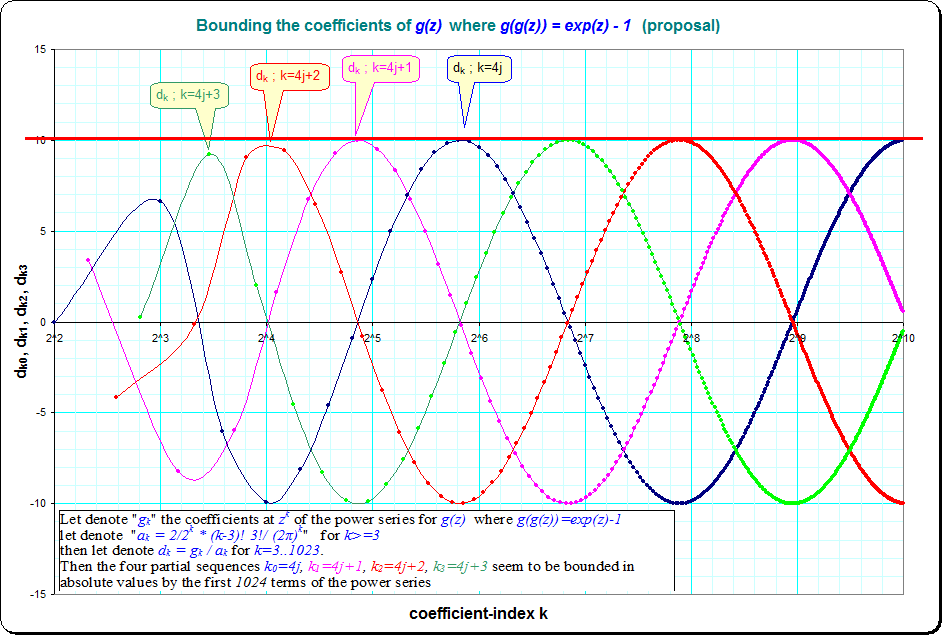 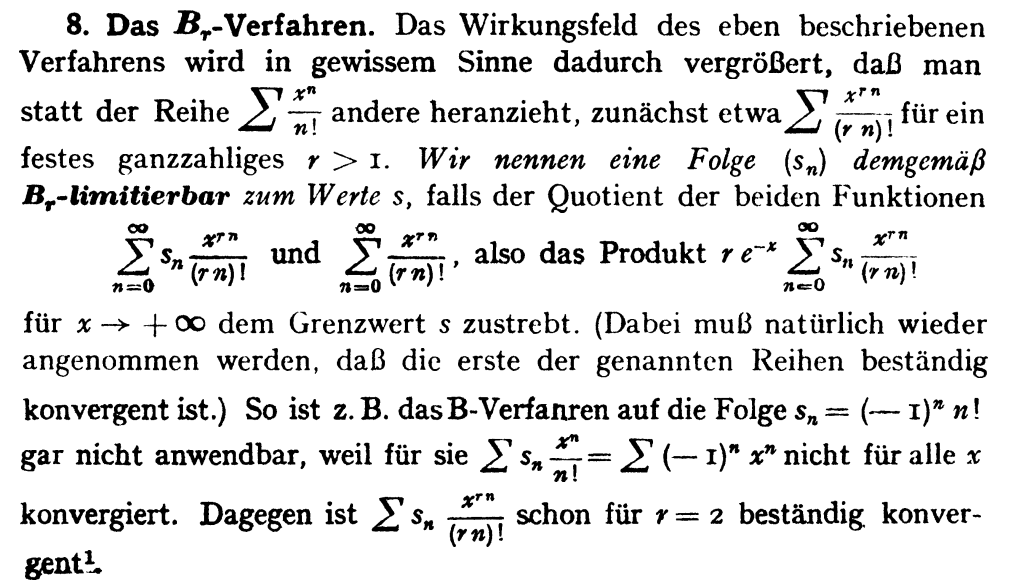 So, there's been some developments on the tetration forum, and I came across two papers:

Long story short, both of these papers provide our result. They specifically mention an expansion by Ecalle for the Abel function: $\alpha(f(z)) = \alpha(z) + 1$ that:

Where in these papers they prove that $b_k = O(c^kk!)$. This doesn't directly answer our question, but, through a bit of algebra, you can identify that:

And that the values $g_k$ have similar bounds to $b_k$--this is just mule work as far as I'm concerned.

The word they use specifically, is that the coefficients are of Gevrey class 1. This is further identified by a conversation between Will Jagy and Ecalle, on the thread Does the formal power series solution to $f(f(x))= \sin( x) $ converge?.

This goes to show that we can express the half iterate $g(z)$ in Euler's manner. Numerical evidence has further confirmed this, as much of us at the tetration forum have been evaluating different and more general integrals using this basis.

This answers the question entirely to my satisfaction, and further answers it using work other than my own. I'm just answering it here for the benefit of anyone who comes across this.

26
Do Abel summation and zeta summation always coincide?
5
mertens-function in the light of divergent summation - what summation method were best adapted
5
Fatou Coordinate for function with rationally indifferent fixed point, and repelling fixed point
6
Is there a effective computational criterion to all periodic points of a rational function are repelling.
12
If the generating function summation and zeta regularized sum of a divergent series exist, do they always coincide?
5
Smoothness in Ecalle's method for fractional iterates
1
classification of rational map with exactly only one Fatou component
11
Divergent series summation beyond natural boundaries
Question feed