I would like to know under what conditions the process of creating a midpoint piecewise geodesic polygon converges on a surface $S \subset \mathbb{R}^3$. $S$ may be assumed smooth, closed, and oriented; or it may be assumed a Riemannian manifold. Let $P$ be a closed geodesic polygon each of whose finite number of edges is a shortest path connecting its endpoint vertices $v_i$. Moreover, the edges of $P$ are "short" in a sense specified below. $P$ need not be simple, i.e., it may intersect and cross itself. Define the midpoint polygon $M(P)$ for $P$ to have vertices $u_i$, each the midpoint of the geodesic segment $v_i v_{i+1}$ of $P$, where $u_i$ is connected to $u_{i+1}$ by a shortest path. I would like the segment $u_i u_{i+1}$ to be the unique shortest path between those points. So assume that $|u_i u_{i+1}|$ is smaller than the injectivity radius of the manifold. (This might require adding new vertices to ensure this condition holds for the next iteration.)

In the plane, iterating this midpoint polygon construction is well studied. On a surface (or Riemannian manifold) it plays a role in curve shortening, in particular Birkhoff curve shortening, which he used to prove the existence of a simple closed geodesic [B27]. Subsequently the technique has many uses. For example, Christopher Croke used Birkhoff shortening to find the length of a shortest closed geodesic on a sphere [C88].

The uses I have seen of Birkhoff shortening are on the sphere, not on more general surfaces. Which brings me to the question:

Q. Does Birkoff shortening, repeatedly applied to a geodesic polygon on a closed surface $S$, always converge (perhaps to a point)? If so, always to a closed geodesic? If not, under what conditions might it not converge? 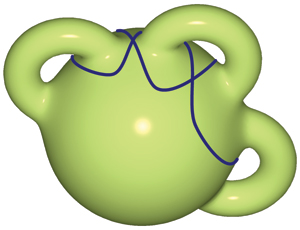 I would advise you to have a look on section 3.7 of the paper of Bowditch, Notes on locally CAT(1) spaces, in Geometric Group Theory, R.Charney, M.Davis, and M.Shapiro eds., de Gruyter (1995). In this section Bowditch says: "The convergence of the Birkhoff process seems to be an open question for Riemanninan 2-manifolds". Also he constructs in this section a 3-dimensional example where the process does not converge.

Here is the abstract of the article http://www.warwick.ac.uk/~masgak/abstracts/lco.html

You may also have a look at the paper

Not the answer you're looking for? Browse other questions tagged mg.metric-geometry riemannian-geometry ds.dynamical-systems open-problems or ask your own question.

22
Geodesics on the sphere

15
Convex hull on a Riemannian manifold
9
Segments of Voronoi Diagrams on smooth manifolds. Are they geodesics?
37
Surfaces filled densely by a geodesic
3
Existence of Simple Closed Straightest Geodesics
2
Geodesic convex hulls in a graph; and their properties
7
Negatively curved manifolds with many totally geodesic submanifolds
Question feed