NOTE: I will not accept an answer because a lot of answers are really good and if anyone want to post under this question later then they are most welcome to post as comment or answer because it will certainly help many people. Thanks to all that contributed.

I have completed my master's in mathematics a couple of years ago and due to very strong personal and professional reasons I couldn't get admitted to grad school despite having a good academic background.

I have a really good background in number theory. I don't have guidance of any professor right now and I want to try working on an open problem.

Can you please let me know of resources( websites/ blogs/books) where I can find open problems in number theory to work on along with their estimated level of difficulty ( if possible)?

There is the famous Unsolved Problems in Number Theory by Richard Guy, 3rd Edition, 2004. PDF available at the Springer link. 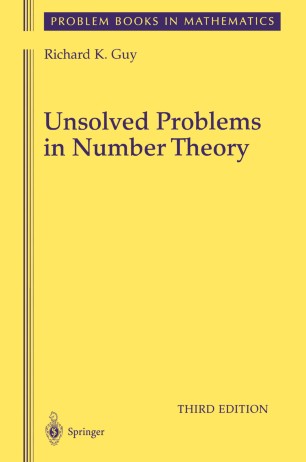 To some extent, research questions are really research themes, and these can definitely be found in journals. Just open a journal (e.g. Algebra and Number Theory) and read an article or review. Sometimes picked at random it can be interesting to read to the end, and you're left with many ideas for new developments, and often direct open questions stated at the end of the paper.

Attacking the "open problems" (as they are called) in number theory (e.g. Riemann etc) straight away may not be fruitful as they can be very difficult if attacked directly from first principles, though this is tenacious and can teach you a lot about the problem. Though to some extent almost no one is just attacking them. Even Wiles was working on something else when he realized he could therein work to prove Fermat's final theorem as a consequence of what he'd seen. He was working on the arithmetic of elliptic curves with complex multiplication by the methods of Iwasawa theory, which had surrounding workers publishing about it (from what I understand).

But there are plenty of research themes in number theory (and otherwise) which are currently being worked on (e.g. probabilistic number theory, etc), and I suppose one would look at research articles in journals of number theory to see what those are. What are other students in number theory working on? What did they publish? Even take a recent PhD thesis of interest and ask "what can be done to develop these results", or "why are these results not interesting"?

Knowing all the research themes is quite difficult, but one learns about them in conferences etc, sometimes presented by experts, but more often presented by PhD students just learning the ropes of the area, each are useful to listen to. Each is a window into a research area one could pick up and get into, like an investment or stock, which hopefully pays off in the long run.

Some open problem collections from my bookmarks:

Go to a good math library, pick up a few books (perhaps even randomly) in number theory and start reading them until you find one book which you really like. I am (almost) sure that you will ask yourself plenty of questions when studying deeply some interesting mathematics. At the beginning, many of these questions are already solved (and perhaps not hard) but questions help advancing. At some point, some of your questions will have no known answer. With some luck, one of these questions is interesting and solvable. (Books can of course be replaced by attendance of lectures, discussions with collegues etc.)

The point is that one needs often some external input and good books can provide this.

A last piece of advice: Do not chose the crowdest corners (e.g. around Riemann hypothesis), at least at the beginning, if you want to make some contributions.

Do check out the Handbook of Number Theory (Volumes I and II), if you need to refer to a compendium of the latest results on number theory. (I forget which Volume has open problems.)

Not the answer you're looking for? Browse other questions tagged nt.number-theory analytic-number-theory soft-question open-problems online-resources or ask your own question.

104
Open problems with monetary rewards
52
Can you solve the listed smallest open Diophantine equations?
19
Floors of rationals to powers: Infinite number of primes?
2
Resources where one can find open problems in Analytic Number Theory

49
Erratum for Cassels-Froehlich
104
Open problems with monetary rewards
16
How important is it for one on the job market to have thought about suitable REU projects?
29
An example of a proof that is explanatory but not beautiful? (or vice versa)
3
Open problems in matroid theory
29
How can I seek help in preparing a very long research article for publication?
55
Books/websites which have motivating stories of mathematicians overcoming hardships in life
Question feed