This is a duplicate of a question (https://math.stackexchange.com/questions/4416204/heegaard-floer-homology-of-a-genus-two-diagram-of-s3) on stackexchange, which did not get any answer. Feel free to flag it if it does not respect the standards.

I am reading the introductory paper "Heegaard diagrams and holomorphic disks" by Ozsváth and Szabó (https://arxiv.org/abs/math/0403029v1, Section 2.2), and I do not understand one of the examples. They compute the homology of the following Heegaard diagram of $S^3$: 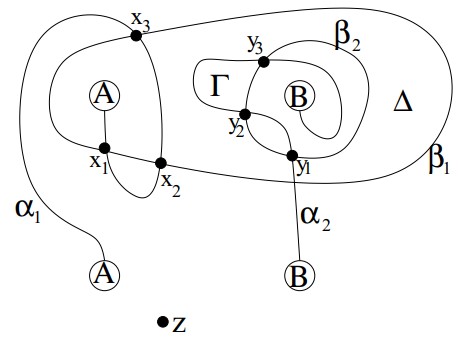 In order to count holomorphic disks connecting $x_3 \times y_3$ to $x_2 \times y_3$, they consider the uniformization of $\Delta$ as a standard annulus with four marked points on its boundary, corresponding to $x_2, x_3, y_2, y_3$. They call $a$ the angle of the arc in the boundary connecting $x_3$ to $x_2$ which comes from $\alpha_1$, and $b$ the angle of the arc in the boundary connecting $y_3$ to $y_2$ which comes from $\alpha_2$. Then, they consider the one-parameter family of conformal annuli with four marked points obtained from $\Delta \cup \Gamma$ by cutting a slit along $\alpha_2$ starting from $y_3$, where the marked points correspond to $x_2,x_3$ and $y_3$ counted twice. At this point, they state:

A four-times marked annulus which admits an involution (interchanging the two $\alpha$-arcs on the boundary) gives rise to a holomorphic disk connecting $x_3 \times y_3$ to $x_2 \times y_3$. By analyzing the conformal angles of the $\alpha$ arcs in this one-parameter family, one can prove that the mod $2$ count of the holomorphic is $1$ iff $a < b$.

I have many questions. First, I do not really get what $a$ and $b$ are. I cannot fully understand why the involution gives rise to a holomorphic disk, although I am quite convinced. The thing I do not get at all is the analysis of the conformal angles in the end. The idea seems to be that if the arc of $\alpha_2$ from $y_2$ to $y_3$ is too long, there cannot be a holomorphic disk, but I do not really get the reason.

Any help will be greatly appreciated!

There are several things going on here, explained rather elliptically in the paper. Let me expand.

First, there's the question of which holomorphic annuli double-cover the disk. More precisely, suppose you are given a holomorphic annulus with each boundary colored in two pieces, red and blue. (Suppose the boundary is sufficiently nice, e.g. locally connected, so that various notions of "boundary" coincide.) When does that annulus have a double-cover to the disk, again with the boundary colored in two colors? The answer is as follows.

Uniformize the annulus to a Euclidean annulus of circumference $2\pi$ with bi-colored boundary. A certain proportion of the upper boundary will be red; call that angle $a$ with $0 < a < 2\pi$. Similarly call the angle of the red portion of the lower boundary $b$. Then the annulus has a double-cover of the disk if and only if $a = b$. I won't go through the proof in detail, but in the case $a=b$ you can get the double cover as follows:

OK, so now we know what kind of annulus we are looking for (and the relevance of comparing $a$ to $b$). Now let's look at the specific annuli in the problem. There is a 1-parameter space of potential conformal annuli here, depending on how long of a slit to cut from $y_3$ to $y_2$ along the boundary between $\Gamma$ and $\Delta$. The question is whether any of the annuli in this family have the balance mentioned above of the amount of $\alpha$ on the two components.

Not the answer you're looking for? Browse other questions tagged 3-manifolds heegaard-floer-homology or ask your own question.