Let $P$ and $Q$ be the boundary segments of two planar simple polygons. View these boundaries as rigid wires. Fix $Q$ in, say, the $xy$-plane, and imagine $P$ arranged in $\mathbb{R}^3$ so that $P$ and $Q$ are disjoint and not topologically linked. Say that $P$ and $Q$ are interlocked if it is impossible to separate $P$ to infinity via rigid motions that at all times avoids $P$ touching $Q$. The polygons cannot flex or distort; each is rigid.

Two unlinked but interlocked polygons are shown below ($Q$ red):

Q. What is the fewest number of vertices $|P|+|Q|$ that achieves unlinked interlocking?

Reducing the red rectangle $Q$ to a triangle, and reducing $P$ to a hexagon, achieves $9$ vertices. Can interlocking be achieved with $8$ total vertices?

As Sam Hopkins commented, 8 vertices are enough. Let $Q$ be the pentagon from the picture and let $\pi$ be the plane containing it. Now we can define the triangle $P$ as a triangle of less diameter than the black segment and intersecting $\pi$ at two points: one point $a_0$ in the open blue region $B$ and one point $b_0$ in the open green region $G$. $P$ and $Q$ are not linked, and it is intuitively clear that they are interlocked, but let´s prove it in detail. 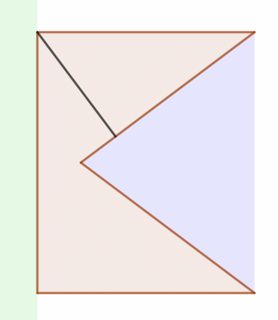 Proof: First of all, if $d(i,j)$ is small enough, $j(P)$ will intersect $\pi$ in two points, because the images by $j$ of at least two vertices of the triangle will be outside $\pi$.

Now consider the function $F(x,y)=$ intersection of the line passing through $x,y$ and $\pi$, defined in an open subset of $\mathbb{R}^6$. This function is continuous in its domain.

Now that we are done with the lemma 1, we can define

So $P_k$ has to intersect $\pi$ in an edge. For the last time, we will consider two cases:

If $a_k$ and $b_k$ are both contained in the edge, then the edge intersects $Q$, which is a contradiction.

P.S: I had some comments regarding whether there are $P,Q$ as in the question with $7$ total vertices but they were wrong (I had not considered one case). An argument that they do not exist is given in Del's answer.

First, any quadrilateral $Q$ lying in a plane $\pi$ can be partitioned in two triangles $Q_1$ and $Q_2$, whose common edge is a diagonal $d$ of $Q$. Now the intersection of the triangle $T$ with $\pi$ consists of two points (otherwise they are coplanar and the conclusion is trivial). Since the polygons are not linked, there are two cases: either both points lie outside $Q$, or they both lie inside $Q$.

Case 1: both lie outside. An inspection of the cases shows that we can just translate $T$ in direction parallel to one of the bisectors of the triangles $Q_1$ or $Q_2$ starting from one of the vertices not belonging to $d$.

Case 2: both lie inside. We will consider a modified problem: given a quadrilateral $Q$ and two initial points $x(0),y(0)$ inside it, find two continuous curves $x(t),y(t)$ such that the distance between the two is decreasing in time to 0, and they never lie in $Q$. The solution is, e.g., a linear homotopy that sends both points to the midpoint of $d$. Now we only have to realize $x(t)$ and $y(t)$ as the intersections of $T$ and the plane $\pi$. One can convince themselves that this is possible by pulling $T$ in direction orthogonal to $\pi$ while translating it.

Here is another example with 8 vertices: a short fat Star Trek symbol and a square in orthogonal planes. 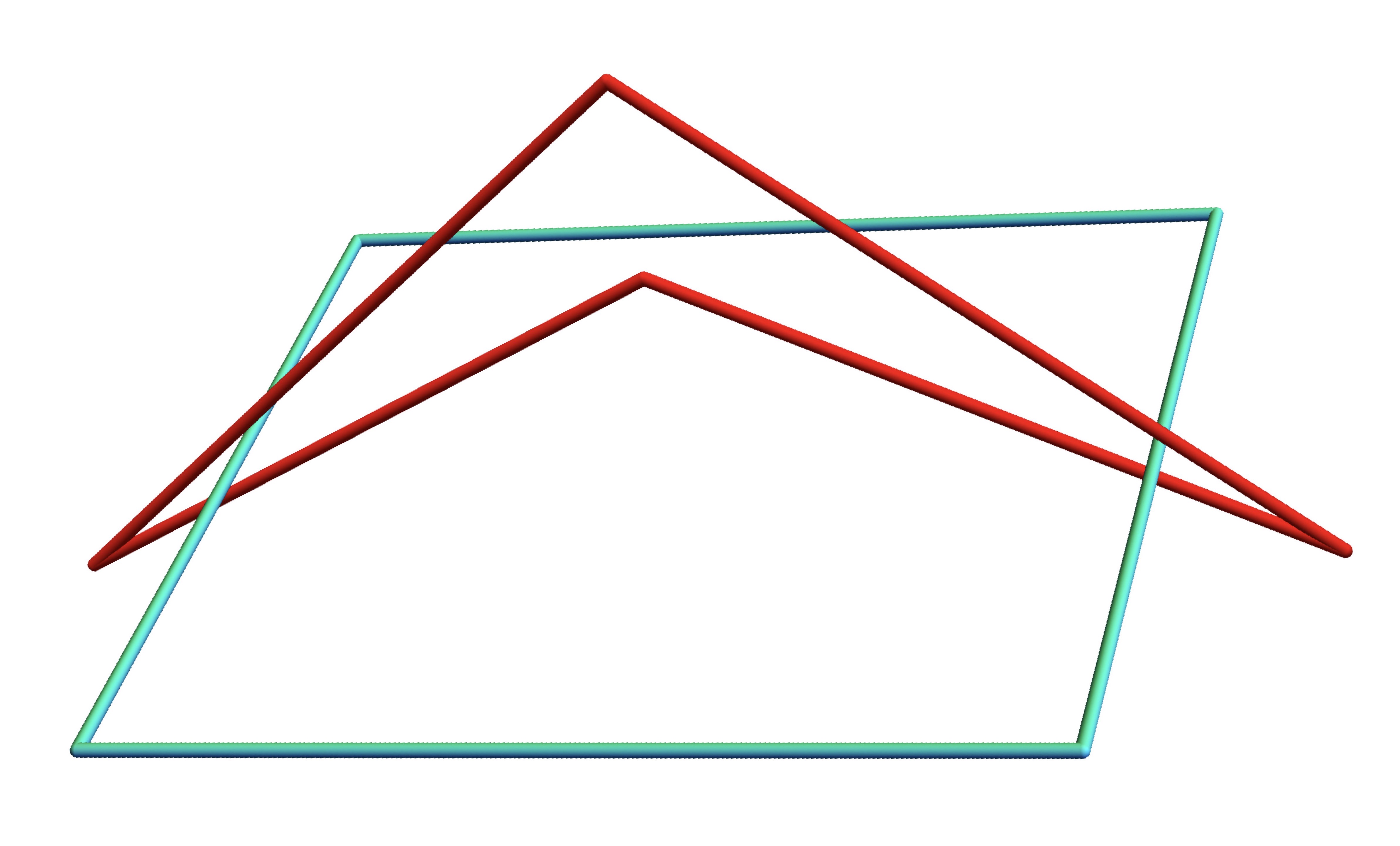 Since the distance between the base points of the red figure is greater than its height, one cannot rotate the square to take it out.

Addendum: As Saúl Rodríguez Martín mentions, this example may not work. If we assume, however, that the links are physical, that is they have some thickness, then I think that it should work.

I think that 8 might be possible, by interlocking two Star Trek symbols as shown below. 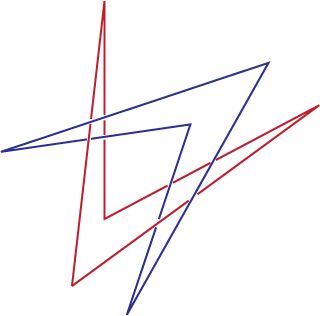 Adendum: This candidate may not work, as quarague points out, but I leave it as a potential "how not to" example. There are other ways to cross the two figures, while they remain unlinked, and one of these variations could be more promising. Also I think it is important to specify whether the loops have any thickness or not. Some configurations may interlock assuming there is nonzero thickness.

Not the answer you're looking for? Browse other questions tagged mg.metric-geometry polygons knot-link or ask your own question.