Suppose there are a finite number of disjoint unit-radii disks in the plane, each spinning clockwise or counterclockwise at the same angular velocity. The plane is filled with a thin fluid layer, and the disks can be viewed as spinning fan blades determining vectors of fluid motion tangent to the disks. Is the resulting steady-state flow and vector field throughout the plane known? I asked a preliminary version of this question on Math SE, and received useful clarifications from user Rahul, who suggested starting with the assumptions that the fluid is incompressible, inviscid, and that the flow is irrotational.

My initial intuition is that there should be something like a Voronoi diagram demarcating boundaries of regions of influence. But my preliminary investigations suggest that it may even be nontrivial to determine the flow between just two counter-rotating vortices. For example, the following image was computed by Paul Nylander based on a paper by O.S. Kerr and J.W. Dold, "Periodic Steady Vortices in a Stagnation Point Flow," J. Fluid Mech., 276, 307-325 (1994) (Wayback Machine). 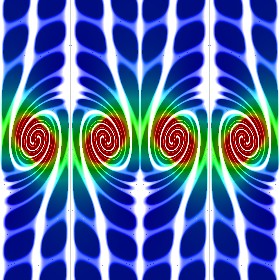 As I am quite unschooled in this topic, pointers to relevant literature might suffice. Thanks!

Edit. Thanks to Willie Wong and Bob Terrell here, and Rahul and David Bar Moshe on MathSE, I have a much broader understanding of the problem, and could likely compute a numerical solution if needed. I appreciate the help!

Not an answer but too long for a comment: Just to clarify, Carr Dold, Willie, and Rahul are not all making the same assumptions. Carr Dold are solving the Navier Stokes. But lets assume inviscid instead.

If you assume irrotational flow, you must take account of the nonsimple connectedness of the domain. Specifically irrotational means that the velocity components $(u,v)$ satisfy $v_x-u_y=0$ i.e. the vorticity is zero. In your domain, which I suppose is as Willie described, this means that $(u,v)$ is a gradient of some harmonic function, plus a sum of irrotational vortices like $$ \left(\frac{-y}{x^2+y^2},\frac{x}{x^2+y^2}\right)$$ which is centered at the origin, using multiples and translates of this to the center of each disk.If you don't care exactly about the boundary conditions, that last sum might do the job for you. In fact, that might be a positive answer to your question, but it is rather special.

But if you don't assume irrotational flow, then you can try a stream function as user Rahul mentioned, with $(u,v)=(-\psi_y,\psi_x)$ taking care of the continuity equation. The steady Euler equations then sort out into the statement that $\psi_y\Delta\psi_x-\psi_x\Delta\psi_y=0$ ($\Delta$ is Laplacian). Interpreting this as a Jacobian, you see that any solution to $$\Delta\psi=f(\psi)$$ will suffice, and you may attempt to choose $f$ as suits your goals.

Some more pointers to the literature, but not really an answer... This is again under the assumption of inviscid flow.

These configurations, where you put a bunch of counter-rotating vortices next to each other, is generally referred to as a Karman vortex street. This configuration arises for instance when you consider the fluid flow off a bluff body in a flow with high Reynolds number, where in the wake of the body vortices "peel off" and are transported downstream.

In the case of potential flow, each point vortex can be described by a simple harmonic function, and if you line up a bunch of point vortices, the total potential function is just the sum of the individual terms. If you put an infinite number of point vortices with the same strength at distances $h$ apart on a straight line, it turns out that the resulting complex stream function has a particularly nice expression: $$ w(z) = i \Gamma \log \sin \frac{\pi z}{h} $$ The case of two infinite series of vortices, with opposite strength and on parallel lines, is also neat. This is the case considered by von Karman. The stream function has a particularly nice closed form expression (in fact, it is just the difference of two of those log-sin functions) and you can investigate stability, etc. using straightforward calculations.

Now back to your original question. To obtain the "domain of dependence" of any one point vortex, you would typically look for stagnation points in the flow, and the connecting separatrices, as separatrices separate fluid regions with different behavior. In dynamical systems terms, the individual fluid particles are governed by the set of Hamiltonian equations $$ \dot{x} = \frac{\partial \psi}{\partial y} \quad \mathrm{and} \quad \dot{y} = - \frac{\partial \psi}{\partial x}, $$ where $\psi$ is the imaginary part of $w$ (the stream function). Stagnation points then correspond to hyperbolic fixed points of the system and separatrices to heteroclinic orbits of the system, and it is clear that you'll never be able to compute these analytically, despite $w$ being known in closed form. The issue is not so much with solving Laplace's equation, but with finding specific level sets of the solution.

If you resort to numerical approximations, a lot can be done. In the case of a single vortex street, things are not so interesting, but for 2D arrays of vortices in the plane, you get a lot of interesting bifurcations and different behaviour, based on the array spacing, vortex strength, etc. This paper has all the details.

Not the answer you're looking for? Browse other questions tagged reference-request ap.analysis-of-pdes mg.metric-geometry fluid-dynamics or ask your own question.

6
How to define a Voronoi reduced basis?
12
n-dimensional voronoi diagram
2
Techniques for refining or constraining a Voronoi diagram?
2
Choosing the weights of a Voronoi diagram — is this function always the gradient of another function?
4
Algorithm for Reconstructing Point Sites from a Voronoi Diagram
2
Surveys/monographs on the vortex filament equation
3
Voronoi diagram on (weighted) graphs
Question feed