How would you have answered Richard Feynman's challenge?

Reading the autobiography of Richard Feynman, I struck upon the following paragraphs, in which Feynman recall when, as a student of the Princeton physics department, he used to challenge the students of the math department.

I challenged them: "I bet there isn't a single theorem that you can tell me ­­what the assumptions are and what the theorem is in terms I can understand ­­where I can't tell you right away whether it's true or false."
It often went like this: They would explain to me, "You've got an orange, OK? Now you cut the orange into a finite number of pieces, put it back together, and it's as big as the sun. True or false?"
"No holes?"
"No holes."
"Impossible! There ain't no such a thing."
"Ha! We got him! Everybody gather around! It's So­-and­-so's theorem of immeasurable measure!"
Just when they think they've got me, I remind them, "But you said an orange! You can't cut the orange peel any thinner than the atoms."
"But we have the condition of continuity: We can keep on cutting!"
"No, you said an orange, so I assumed that you meant a real orange."
So I always won. If I guessed it right, great. If I guessed it wrong, there was always something I could find in their simplification that they left out.

Forgetting that most of this was probably done as a joke, with what theorem would you have answered to Feynman's challenge?

There's a certain gaming/sporting aspect to Feynman's challenge that works in his favor. First of all, as phrased, the challenge gives him a 50/50 shot at being right even if he guesses randomly. Also, if you present a statement which seems too obviously true then Feynman could reason that you wouldn't have chosen that statement if the obvious answer were correct.

EDIT: There has been some discussion in the comments about whether the presence of irrational numbers in #5 above means it refers to some mathematical abstraction that is not "physically realizable." Here is an easier-to-understand (though less spectacular) question that captures the essential issue. Consider the Perles configuration of nine green points in the figure below. If the outer pentagon is a mathematically perfect regular pentagon, then at least some of the nine points have to have irrational coordinates. No big surprise there. 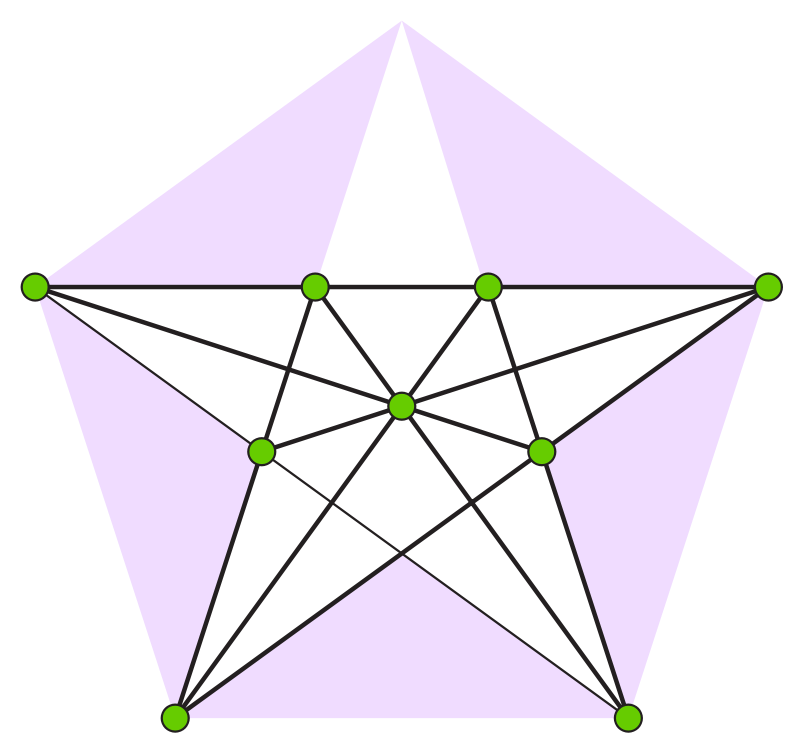 But now consider this. Suppose I don't require that the pentagon be a perfectly regular pentagon; suppose I allow you to redraw the figure, re-positioning the nine points in any way you like, as long as you preserve all the collinearities (i.e., points that are collinear in the original diagram must remain collinear in your new picture). Can you arrange for all nine points to have rational coordinates? The answer, which I find surprising, is no.

As far as physical intuition is concerned, what this example shows is that the seemingly physical concept of "collinearity of points in the plane" (suitably idealized of course) already forces irrational numbers upon us. In contrast, if you point out that a right-angled triangle with two sides of length 1 has a hypotenuse of $\sqrt{2}$, then a physicist could object that physical angles and lengths are never infinitely precise, and that you can create an arbitrarily close approximation using rational numbers. In the Perles configuration, we are not stipulating any distances or angles precisely; we are only stipulating that certain points be exactly collinear, and it turns out that this idealization already requires us to introduce irrational numbers.

Can you hear the shape of a drum?

Easy to understand problem for a physicist, with a non-trivial answer given by Gordon, Webb and Wolpert in 1990.

There are six Platonic solids in 4 dimensions.

If you have never thought about this problem before, I think it's almost impossible to deduce the truth of this statement immediately, as Feynman sought to do.

Here are two questions, and both are about math that was known long before Feynman passed away.

Let $S$ be a set of positive integers such that $S, 2S, 3S$ are disjoint. Then the upper density

Imagine a brick of weight $1$ trapped between a wall and a brick of weight $100^n$, coming at it with some speed. Assume no friction and elastic collisions. True or false: the number of collisions between the bricks and the smaller brick with the wall is the sequence of the first $n+1$ digits of $\pi$.

In terms of a math problem that a lay person* could understand but have completely the wrong intuition about, rather than anything involving deep mathematics, I might choose something from elementary probability: e.g., the Monty Hall Problem or Simpson's Paradox. As the Wikipedia link says, even Erdös gave the wrong answer to the Monty Hall Problem. And Simpson's Paradox seems at first blush to contradict basic probabilistic facts like linearity of expectation. These are just two examples; the point is that our brains seem to have a lot of (not always correct) probabilistic intuition hard-wired into them.

*Which of course Feynman was not, though he was also not a mathematician.

Equip the sphere $\mathbb{S}^2$ with any Riemannian metric, then it must have at least three closed geodesics by the theorem of three geodesics. I believe these are terms which Feynman should understand as he has to know General Relativity.

Claim 1: It is possible to write a program which decides whether any other computer program will ever finish running. (This is the halting problem).

It can't. Can be proved using a diagonal argument.

By the Riemann integral, I mean the integral for all continuous functions from $[0,1]$ to $\mathbb R$, which we can prove always exists.

Claim 2: The Riemann integral is computable.

Claim 3: Finding an eigenvector of a positive-definite symmetric matrix is computable.

See how many of those you got right.

Can every solvable position of the 2x2x2 Rubik's Cube be solved in fewer than 12 moves?

The Continuum Hypothesis. Make it into either a positive or negative assertion and let him decide whether it is true or false!

I guess with combinatorics and number theory it's too easy...

Every map $S^3\to S^2$ is homotopic to a constant. True/False? (But probably Feynman knew about the Hopf map)

There are orientable 3-manifolds which are not boundaries of compact 4-manifolds. True/False? Same question for 4-manifolds.

The partial sums of the Fourier series of a continuous function on the circle converge uniformly. True/False? Same question for $L^1$ functions, with convergence in $L^1$.

I think Feynman would have understood the assumption and the statement of this theorem, but its proof uses the Classification of Finite Simple Groups, and I think it isn’t intuitively obvious, at least not to me, that $H$ should be a subgroup or why it should be a subgroup — it seems almost a “coincidence”.

Let $G$ be a $3$-connected planar graph, and let $F$ be a face of $G$. Realize $G$ as rubber balls (vertices) connected by springs (edges) with spring-constant $1$. Place $G$ on a wooden surface, and nail the vertices in $F$ to the wood to form a circle, large in relation to $G$ (say, the radius is more than all the balls placed in a long line). Assume negligible friction between the wood surface and the balls. Under the force of the springs, $G$ will settle into a planar embedding.

The Hadamard and de la Vallee-Poussin theorem that $\zeta(s)$ does not vanish on the line $\Re(s)=1$.

(Of course, in real-life terms, such games there would have been dangerous... I guess RF did not see anyone among the grad students who could out-guess him, at that particular time. In a way, bad luck for him.)

I have read that Feynman had trouble believing that the P vs. NP problem was even an open conjecture.

The regular tetrahedron is the only compact surface in $\mathbb R^3$ that has arbitrarily long closed geodesics.

A lot of cryptography is based on posing problems where the answer is known and easy to check, but extremely hard to find. Moreover, the problems are often straightforward questions in arithmetic. Thus, these kinds of problems seem ideal if you want to win such challenges.

As an example, here is an RSA Type Challenge.

Not the answer you're looking for? Browse other questions tagged soft-question big-list examples math-communication or ask your own question.

61
Axiom of choice, Banach-Tarski and reality
32
Why is uncomputability of the spectral decomposition not a problem?
10
Mathematical fictionalism

45
What out-of-print books would you like to see re-printed?
67
A book you would like to write
30
What are your favorite concrete examples of limits or colimits that you would compute during lunch?
88
Have you solved problems in your sleep?
129
Which mathematical definitions should be formalised in Lean?
144
Old books you would like to have reprinted with high-quality typesetting
Question feed