Are there infinitely many "generalized triangle vertices"?

Briefly, I'd like to know whether there are infinitely many "generalized triangle centers" which - like the orthocenter - are indistinguishable from a vertex of the original triangle. This is basically a refinement of this MSE question of mine; note that the type of "generalized triangle center" I'm interested in is not the standard one (see 1,2), although I would also be interested in the situation for that definition.

Let $\mathbb{T}$ be the set of noncollinear ordered triples of points in $\mathbb{R}^2$. Say that a topological triangle center representative (ttcr) is a function $t:G\rightarrow \mathbb{R}^2$ such that:

Each classical triangle center that I'm familiar with corresponds to a ttcr, possibly after tweaking the domain. For instance, in the case of the orthocenter we need to throw out right triangles to satisfy the iterability requirement.

My question is simply, how many pseudovertices are there? Specifically:

Are there infinitely many pseudovertices?

I strongly suspect that the answer is yes (indeed that there should be continuum-many due to the existence of at least one not-too-interesting continuously-parameterized family), and I suspect that in fact there is an easy proof of this fact, but I can't see it at the moment.

This is a report on an unsuccessful computational approach which is rather too long for a comment.

I work with complex numbers to represent the points in the obvious way.

The general approach was to use Sage to expand $(z\overline{z})^k z\mu(z^{-1}) - (z\overline{z})^k \mu(z)$ and $\mu(1-z) - 1 + \mu(z)$ for $z = a+bi$ with the coefficients of $P$ and $Q$ as variables; then since the results should be identically zero, I consider both values as polynomials in $a$, $b$; separately take the real and imaginary part of each coefficient; and form the ideal given by all of these subcoefficients. Finally I ask Sage for the minimal associated prime ideals.

The approaches I then took to filter down the prime ideals were rather more ad hoc: for the simpler ones I just expanded $\mu(\mu(z)) - z$ in the non-eliminated variables to get a new ideal and look for its primes; for more complicated ones I took a small number of non-real values of $z$, calculated $\mu(\mu(z)) - z$ for those values, and obtained an ideal that way; and for the most recent cases treated it occurred to me that $f(b) = \mathfrak{Im}(\mu(\tfrac12 + bi)) : \mathbb{R} \to \mathbb{R}$ should be an involution and I obtained ideals from a combination of $f(f(b)) - b$ and the obvious fact that the equilateral triangle gives $\mu(\tfrac12 + \tfrac{\sqrt 3}2i) = \tfrac12 + \tfrac{\sqrt 3}6i$ or a pole; there is a slim possibility that the cases treated by the second approach contained a solution which was missed due to having a pole at one of the sample points. But I didn't find any solutions other than $X(4)$ and $X(74)$ in the following cases:

The almost-fully-general quartic case took several hours of calculations just to yield the initial prime ideals, before taking into account the involutive requirement, so I don't think I can push this approach any further. 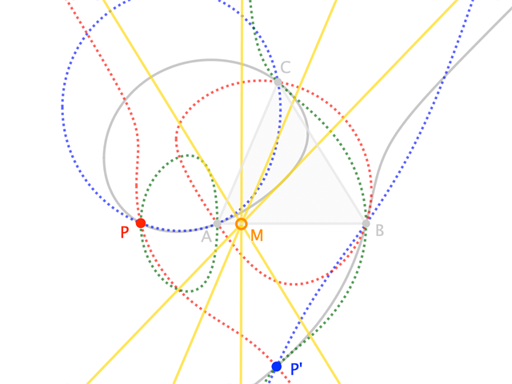 This kind of interchangeability is at least reminiscent of the pseudovertex property, so it seems not-unreasonable to search the Neuberg cubic for other pseudovertex candidates. An explicit parameterization of the cubic might aid the search, so I'm providing one here.

Every point $M$ on the Euler line of $\triangle ABC$ corresponds to two points on the cubic (see animation and description below), so that the latter can be parameterized by the former.

Clearly, this is easier typed than done, as the second-level application of the parameterization explodes in complexity. Perhaps at least some of the thorny algebra can be avoided by mining the geometric lore of Neuberg cubics; Gibert's page about the curve, and associated papers, themselves provide a good deal of lore to consider. (Perhaps the pseudovertex question itself has already been addressed.)

Addendum. [Moved to this non-answer.]

Transferring the Addendum to my previous non-answer to a non-answer of its own, as it's beginning to sprawl (and because it actually seems more significant) ...

Unlike with Neuberg, given a point $P$ on this curve, the corresponding cubic for $\triangle PBC$ does not necessarily pass through $A$. Indeed (barring triangle degeneracies), Mathematica-assisted symbol crunching (see below) shows that this occurs for (Kimberling-esque) triangle center $P$ when and only when $P$ is one of $X(4)$, $X(74)$, $X(1138)$. Effectively, then, the property

characterizes the known pseudovertices. This could be useful in the search for (or the ruling-out of?) other candidates.

For the symbol-crunching, we start with the barycentric $u:v:w$ equation for $K279$ relative to $\triangle ABC$:

Applying Mathematica's Resultant to eliminate $u$ from this and $(1)$ gives this equation (ignoring powers of factors):

Further, our interest in centers allows us to ignore factors $v$, $w$, $v+w$. Factor $v-w$ vanishes when $v=w(=u)$, which corresponds to centroid $X(2)$, a candidate we have already ruled-out.

Factor $f$ is a degree-$6$ polynomial in $v$ and $w$, with $711$ terms. I haven't done a proper analysis of it; however, when, say, $(a,b,c)=(6,9,13)$, the solutions are all non-real. I'm pretty sure we can consider this extraneous in general. (There's probably a neat way to avoid this factor altogether by first reducing the system or something, but I haven't found it.)

Not the answer you're looking for? Browse other questions tagged gn.general-topology mg.metric-geometry euclidean-geometry plane-geometry triangles or ask your own question.

21
Triangle centers from curve shortening
9
Monochromatic point sets in two-colored plane
5
Does this iterated Delaunay triangulation process always "explode"?
5
Some T2 spaces must have a small dense?
10
Fractal plane continuum with order $\aleph_0$?
7
What's the minimal weight of a maximal space?
2
What is the minimum number of triangle centers sufficient to unambiguously describe a triangle?
12
The 4th vertex of a triangle?
Question feed