Intuition behind the notion of distance between curves

For the above definition is it necessary that $g$ be complete as is often assumed? Further when all is the existence of a length minimizing geodesic guaranteed between any two points? (I am aware of the result which says that given any point there is always a neighbourhood around it where between any two points there is a length minimizing geodesic)

Then I know of a theorem which proves that a smooth time-like curve connecting two points realizes the local maximum of length between these points if and only if it is a geodesic between them with no conjugate points in between.

How does this fit in with the need to have a unique locally minimizing geodesic for the D-function to be defined?

I think that the topology introduced by this distance function on the space of paths between $p$ and $q$ is what is called the ``Frechet Topology" and under which this space of paths becomes an infinite dimensional metric space and it is also complete. I think under this topology the distance function between two points on the manifold becomes a continuous function on the space of curves joining the two points.

Confusion begins when I see claims which seem to mean that in the $(1,n)$ signature case the "proper length" of time-like curves is apparently NOT a continuous function on the space of rectifiable curves in the above topology.

(Is one assuming that the above definition of the D-function and the Frechet Toplogy continue to make sense even on a pseudo-Riemannian manifolds?)

But it is claimed that the length function on the space of rectifiable curves between between two fixed points becomes what is called an "upper semi-continuous" function in the above topology. (I don't have much intuition about this.)

Apparently these kind of functions satisfy the good old property of attaining a maxima on compact sets and this gets used to say that on a globally hyperbolic pseudo-Riemannian manifold given any two points there is a length maximizing time-like geodesic between them.

In light of the theorem stated in the fourth paragraph I guess the above only says that between any two points on a globally hyperbolic space-time there exists a geodesic with no conjugate points in between and then by that statement it will automatically be the local maximum length time-like curve between them.

I would like to know what is the intuition behind this definition of ``distance" on the path spaces and how the alleged consequences follow. Also if someone can give me the bigger picture of what is going on.

Since your title includes "intuition," even though this is tangential to your concerns (if I may use "tangent" in its figurative sense!), I thought I would mention that in computer science, the Fréchet distance is often used to measure the distance between two curves. It is "the minimum length of a leash required to connect a dog and its owner as they walk without backtracking along their respective curves." For example, there is a nice 2009 paper entitled, "Homotopic Fréchet distance between curves or, walking your dog in the woods in polynomial time."

The figure below is from another, related paper, "New Similarity Measures between Polylines with Applications to Morphing and Polygon Sweeping," which offers a variation on Fréchet distance in which the leash is not permitted to cross the curves. 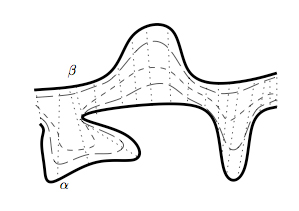 First, pseudo-riemannian metrics won't give you a distance $D$ since they don't even give you a distance on the manifold. To get a distance by the minmization of curves, you need your metric to be positive definite (although you can do many things in the context of sub-Riemannian geometry, but that's another story).

Second, if by proper length of a curve you mean its rectifiable length, then $D$ is precisely made to make the length function continuous (and even Lipschitz): $|\ell_{\gamma_1}-\ell_{\gamma_2}|\leqslant D(\gamma_1,\gamma_2)$ by the very definition of $D$.

This seems to be the most important thing to understand about this distance. The first try to define it would be $D_0=\sup_t d(\gamma_1(t),\gamma_2(t))$ (uniform distance), but a very intricate zigzaging curve could converge to a geodesic segment. Hence you penalize the length by adding a $|\ell_{\gamma_1}-\ell_{\gamma_2}|$ term, so that $D$ is close to $C^1$ convergence of smooth paths, but defined for all rectifiable ones.

I cannot answer the other questions, at least not without precisions relative to my comment.

My suggestion is that you leave for a moment the context of Riemannian manifolds (where I guess you feel comfortable) and look to those concepts in the generality of metric spaces, also with some point of view from Functional Analysis (total variation, semicontinuity of length, compactness in functional spaces, &c). It will take you a very little effort. An elementary and classic introduction is G.Choquet's Course d'Analyse, Tome II (Topologie).

10
Alexandrov angles in Riemannian manifolds
5
Existence of Geodesics in continuous metrics
6
Negatively curved metrics minimizing the length of a homotopy class of simple closed curves
11
Strong equivalence between intrinsic and extrinsic metrics on $GL_n^+$?
8
Can a complete manifold have an uncountable number of ends?
11
Length decreasing homotopies of curves
2
The existence of length-minimizing path between two points in a Riemannian manifold with boundary
22
Is the metric completion of a Riemannian manifold always a geodesic space?
8
If a (distance) metric on a connected Riemannian manifold locally agrees with the Riemannian metric, is it equal to the induced metric?
3
There exists differentiable curves arbitrarily close to the continuous ones
Question feed