Is a rhombus rigid on a sphere or torus? And generalizations

If a rectangle is formed from rigid bars for edges and joints at vertices, then it is flexible in the plane: it can flex to a parallelogram. On any smooth surface with a metric, one can define a linkage (e.g., a rectangle) whose edges are geodesics of fixed length, and whose vertices are joints, and again ask if it is rigid or flexible on the surface. This leads to my first, specific question:

Q1. Is a rhombus, or a rectangle, always flexible on a sphere? 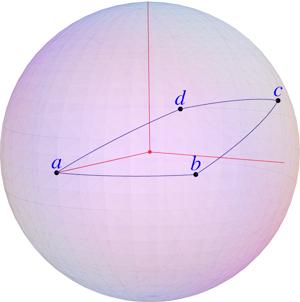 It seems the answer should be Yes but I am a bit uncertain if there must be a restriction on the edge lengths. (In the above figure, the four arcs are each $49^\circ$ in length, comfortably short.)

Q2. The same question for other surfaces: Arbitrary convex surfaces? A torus?

I am especially interested to learn if there are situations where a linkage that is flexible in the plane is rendered rigid when embedded on some surface. It seems this should be possible...?

Q3. More generally, Laman's theorem provides a combinatorial characterization of the rigid linkages in the plane. The $n{=}4$ rectangle is not rigid because it has fewer than $2n-3 = 5$ bars: it needs a 5th diagonal bar to rigidify. Has Laman's theorem been extended to arbitary (closed, smooth) surfaces embedded in $\mathbb{R}^3$? Perhaps at least to spheres, or to all convex surfaces?

Thanks for any ideas or pointers to relevant literature!

Addendum. I found one paper related to my question: "Rigidity of Frameworks Supported on Surfaces" by A. Nixon, J.C. Owen, S.C. Power. arXiv:1009.3772v1 math.CO In it they prove an analog of Laman's theorem for the circular cylinder in $\mathbb{R}^3$. If one phrases Laman's theorem as requiring for rigidity that the number of edges $E \ge 2 V - 3$ in both the graph and in all its subgraphs, then their result (Thm. 5.3) is that, on the cylinder, rigidity requires $E \ge 2 V -2$ in the graph and in all its subgraphs. This is not the precise statement of their theorem. They must also insist that the graph be regular in a sense that depends on the rigidity matrix achieving maximal rank (Def. 3.3). They give as examples of irregular linkages on a sphere one that contains an edge with antipodal endpoints, or one that includes a triangle all three of whose vertices lie on a great circle. But modulo excluding irregular graphs and other minor technical details, they essentially replace the constant 3 in Laman's theorem for the plane with 2 for the cylinder.

Theirs is a very recent paper but contains few citations to related work on surfaces, suggesting that perhaps the area of linkages embedded on surfaces is not yet well explored. In light of this apparent paucity of information, it seems appropriate that I 'accept' one of the excellent answers received. Thanks!

Addendum [31Jan11]. I just learned of a 2010 paper by Justin Malestein and Louis Theran, "Generic combinatorial rigidity of periodic frameworks" arXiv:1008.1837v2 (math.CO), which pretty much completely solves the problem of linkages on a flat 2-torus, generalizing to flat orbifolds. They obtain a combinatorial characterization for generic minimal rigidity for "planar periodic frameworks," which encompass these surfaces.

Q3: Laman's theorem is the same on the sphere.

Indeed, a configuration with $n$ vertices and $m$ edges is defined by a system of $m$ equations in $2n-3$ variables (there are $2n$ coordinates of points, but we may assume that the first point is fixed and the direction of one of the edges from the first point is fixed too). The the left-hand sides are analytic functions of our variables and the right-hand sides are the squares of the lengths of the bars (on the sphere, cosines rather than squares).

Consider this system as a map $f:\mathbb R^{2n-3}\to\mathbb R^m$. The rigidity means that a generic point $x\in\mathbb R^{2n-3}$ cannot be moved within the pre-image of $f(x)$. This implies that $rank(df)=2n-3$ on an open dense set. Choose a configuration from this set and project it to the sphere of radius $R\to\infty$. The equations on the sphere converge to those in the plane, hence the rank of the linearization on the sphere will be maximal ($=2n-3$) for all large $R$. So we get an open set of configuration on the sphere where the linearization has the maximal rank (and this implies rigidity). Since all functions involved are analytic and the rank is maximal on an open set, it is maximal generically. So our linkage is generically rigid on the sphere.

Conversely, consider a flexible linkage on the plane. If $m<2n-3$, it will be flexible on the sphere by a dimension counting argument. Otherwise, by Laman's theorem, there is a subgraph with $r$ vertices and more than $2r-3$ edges. Consider such a subgraph for which $r$ is minimal. Then, by Laman's theorem, we can remove some edges so that this subgraph remains rigid. And, by the above argument, it is rigid on the sphere too. So the edges that we removed were redundant both in the plane and in the sphere. Let's forget about them and repeat the procedure. Eventually we will get a linkage with fewer than $2n-3$ edges.

This might be a cheat, but if you consider a linkage turning once around the meridian of a torus, it might be not flexible. Actually, a linkage homeomorphic to a circle that minimizes length in its homology class is not flexible.

No rhombus on the round sphere is rigid, if we define a rhombus $ABCD$ to be a union of four geodesic segments $\overline{AB}\cup \overline{BC}\cup \overline{CD}\cup \overline{DA}$, such that $A$, $B$, $C$, and $D$ are all distinct points, no three of which are collinear, and such that all four segments have the same length, with self-intersections and overlaps allowed. Suppose $ABCD$ is a rhombus. First note that the hypotheses imply that $B$ is neither equal to nor antipodal to $A$: they're not equal because the vertices are distinct; while if they were antipodal, then $C$ would have to be equal to $A$ because $A$ is the only point at the correct distance from $B$. These facts imply that the endpoints of the geodesic segments starting at $A$ and having length equal to $AB$ trace out a circle, not a point. Let $B'$ be any point on this circle, and let $C'$ be the point obtained by reflecting $A$ through the great circle containing $B'$ and $D$. Because reflection through a great circle is an isometry, it follows that $AB'C'D$ is also a rhombus with the same side lengths as $ABCD$.

I would guess that this argument could be made to work in any symmetric space (with a suitable interpretation of "antipodal"), but I have no idea what would happen with more general metrics.

The first paragraph of Some notes on the equivalence of first-order rigidity in various geometries by Franco V. Saliola and Walter Whiteley states:

In this paper, we explore the connections among the theories of first-order rigidity of bar and joint frameworks (and associated structures) in various metric geometries extracted from the underlying projective space of dimension n, or $\mathbb{R}^{n+1}$. The standard examples include Euclidean space, elliptical (or spherical) space, hyperbolic space, and a metric on the exterior of hyperbolic space.

Not the answer you're looking for? Browse other questions tagged reference-request mg.metric-geometry discrete-geometry surfaces or ask your own question.

4
A.J. Galitzer's Ph.D. thesis: On the moduli space of closed polygonal linkages on the 2-sphere