How is the morphism of composition in the enriched category of modules constructed?

I asked this a week ago at MSE, but without success.

I am studying enriched categories and I have a feeling that I am doing something wrong because all the way each step, each elementary proposition, requires enormous efforts and a lot of time from me. In particular, I am now stuck in the question of how the structure of the enriched category is introduced into the category $_AV$ of modules over a given monoid $A$ in a (symmetric) closed monoidal category $V$.

I asked this earlier (in April) at MSE:

if we consider an arbitrary closed monoidal category $V$ and take an arbitrary monoid $A$ in $V$, will the category $_A V$ of all left $A$-modules be an enriched category over $V$?

My proof requires 40 diagrams, but this is only a draft, because I deduce everything from the following lemma, which still is a puzzle for me:

This looks very strange to me (because it's difficult for me to believe that everything can be so complicated), but I don't see how this can be simplified, nor how to prove this lemma. Can anybody help me?

In Russia where I live, such problems are traditionally resolved by communication with experts, but as far as I know, there are no experts in category theory left in Russia.

Now it’s ready for diagram-chasing: I wrote down the desired LHS as a vertical composite and worked rightwards from it until I could find the RHS. Based on the algebraic proof above, I expected 4 main steps, in order: the definition of composition; the $(M,N)$ homomorphism condition; the $(N,P)$ homomorphism condition; and then the definition of composition again. So I wrote those each down on the side to know what to look for. Using those, together with the “interchange” rule $(\alpha \x B)(A' \x \beta) = (A \x \beta)(\alpha \x B')$, the following diagram pretty much wrote itself: 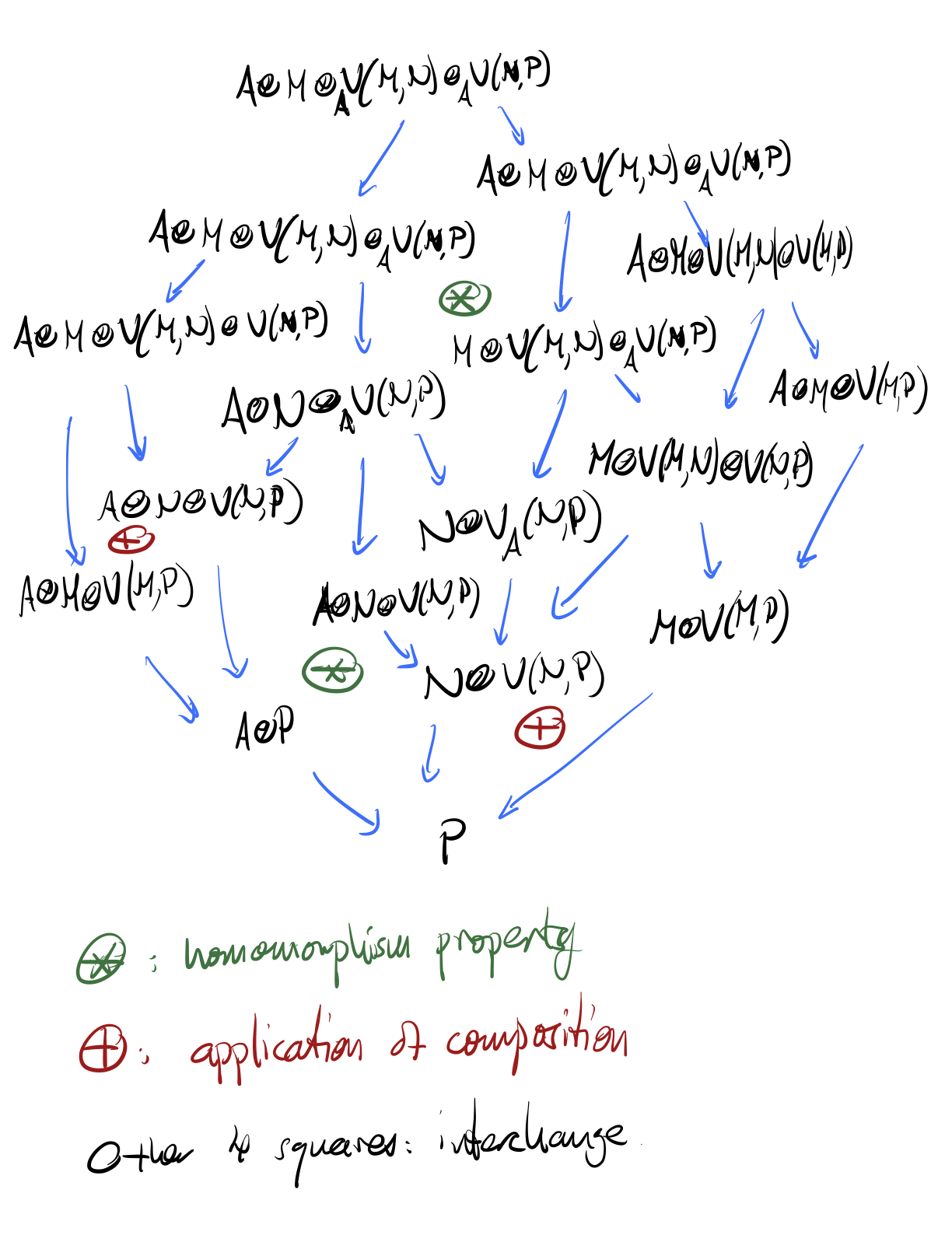 (although the layout was of course terrible the first time; this version is rewritten for readability). Here the vertical composites down the left- and right-hand sides are exactly the maps $A \x M \x \AV(M,N) \x \AV(N,P) \to P$ we needed to show were equal. Overall, as hoped, it really isn’t too bad in the end — one big diagram, built of 9 commutative squares/hexagons.

With these definitions, no extra lemmas are needed for the proof above. On the other hand, you say you’re using the definition given by Martin Brandenburg here, specifying the maps in the equaliser as

Fact. The juxtaposition of two squares in a diagram

when precomposed with the map $\mod_A(M,N)\otimes \mod_A(L,M) \hookrightarrow [M,N]\otimes [L,M]$ at the top left corner, commutes.

Of course I have to tell you how the solid maps are defined:

A bit sloppily, this means that if we choose $(f,g)\in [M,N]\otimes [L,M]$ such that $f : \mod_A(M,N)$ and $g : \mod_A(L,M)$, then chasing their image along the possible compositions in the above diagram yields the same result.

It doesn't seem problematic to me to prove this statement; you just need the usual diagram chasing, plus (If) and (Ig) above.

A bit more effort is required if you want to show explicitly that the $\hat c_{LMN}$ "are compositions", in the sense that they are associative and unital. However, (again a bit sloppily) "they arise as restrictions of a composition rule".

3
Is there a sensible way to enrich over SymMonCat such that id_X is not the monoidal unit?
13
What are the higher morphisms between enriched higher categories?
1
About the closed structure on the modules of a monoidal closed symmetrical category
8
What is the free monoidal category generated by a monoid?
5
Two definitions of modules in monoidal category
4
Category enriched over a monoidal 2-category
7
generalized elements in monodial categories
7
Multiplication and division by a morphism under the “inner composition” in closed monoidal categories
11
Yoneda Lemma for monoidal functors
Question feed