The remaining of my discussion is articulated as follows:

While it would be totally absurd to use my approach to prove that there are infinitely many primes (because you need Mertens third theorem to get the approximation $P(M_1,N) = O(N/\log N)$, the shape of the curve below is almost identical to that of the twin or cousin primes cases. In short, if you can answer my question for that particular case, answering the question for the twin or cousin primes is essentially the same. The nice thing about the primes is that we know there are infinitely many of them. So solving this via my approach could lead to a proof of the twin prime conjecture. 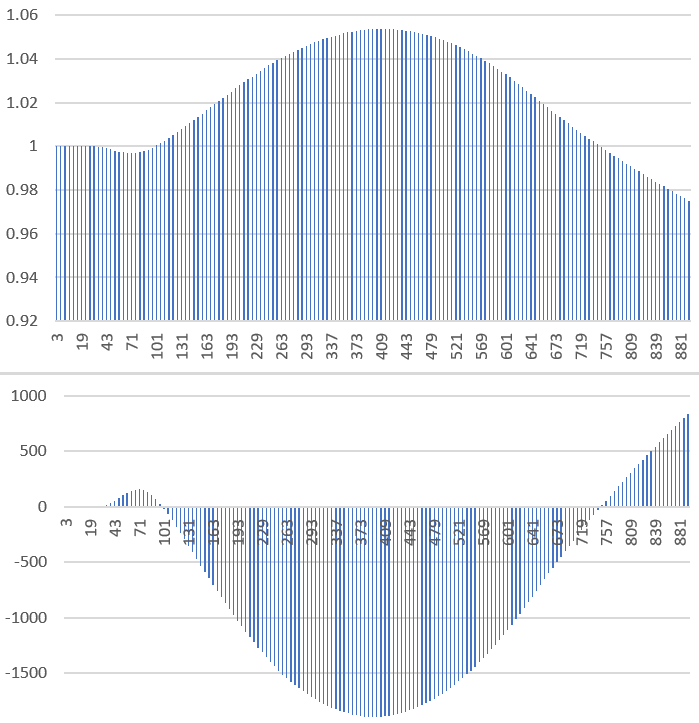 I have a few questions, ranging from less difficult to more difficult. Even an answer to the least difficult question will be accepted.

The OEIS sequences associated with my sieve algorithm are as follows:

The reason why $M_1$ is called the critical point is because when $M=M_1$, all the elements of $S(M, N)$ are elements of the corresponding OEIS sequence. If $M<M_1$, this is no longer true, and the number of elements in $S(M,N)$ is artificially inflated, resulting in a higher $R(M, N)$, culminating at $M=M_0$.

This represents the immense majority of cases, for instance if you pick up $A_p$ or $B_p$ randomly. In this case $R(M, N)$ is much closer to $1$ as long as $M$ is not too large (suggesting it is easier to prove that $S(M_1,N)$ contains infinitely many elements as $n\rightarrow\infty$), but the behavior of $R(M, N)$, for fixed $N$ and as a function of $M$ is more erratic and unpredictable. See chart below as an example, corresponding to the "counter example" case in my table. 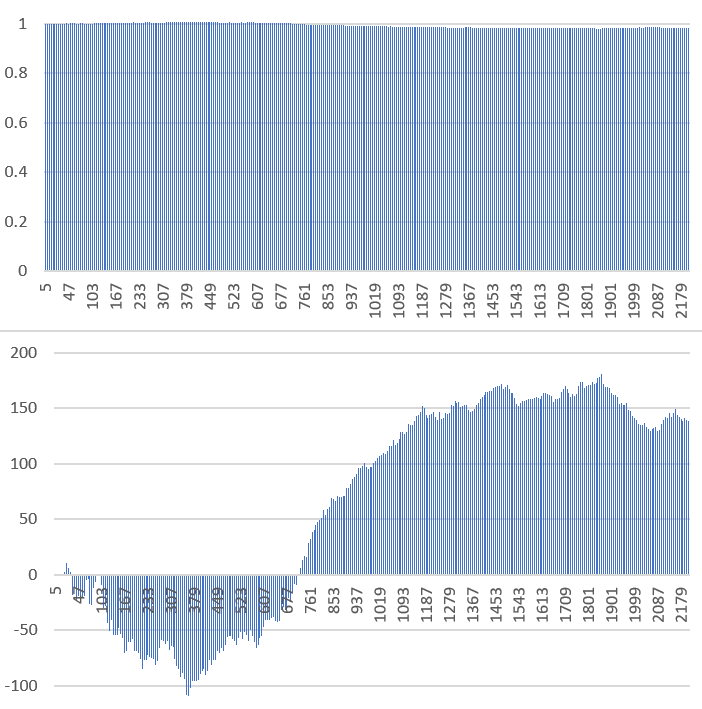 Compare this chart with the previous one.

9
Primes $p$ for which $pk+1$ is prime for small $k$ (or approximating Sophie Germain)
5
A counting problem related to twin primes
9
Set of prime numbers $q$ such that $\sum\limits_{p\leq\sqrt{q}}p=\pi(q)$, where $p$ are prime numbers
0
Is such a generalization of the twin prime conjecture known?
Question feed