It is clear that every codimension-one submanifold (i.e., hypersurface) of $Q$ has abelian normal bundle.

I am interested in the case where $Q$ is a Lie group $G$ equipped with a bi-invariant metric.

Questions: Are submanifolds with abelian normal bundle (and codimension greater than one) plentiful or rare in $G$? In particular, do two-dimensional examples exist?

One class of examples in a compact, connected Lie group $G$ of rank $r$ are the conjugacy classes of codimension $r$. Taking an element $a\in G$ whose centralizer is a maximal torus (a generic condition), the conjugacy class of $a$ is a submanifold $C_a\subset G$ of codimension $r$ whose normal plane at $a$ is the tangent at $a$ to $Z_a$, the centralizer of $a$ in $G$, which is a flat, totally geodesic submanifold. By the $G$-homogeneity of $C_a = G/Z_a\subset G$, the fact that this holds at $a$ implies that it holds at all point of $C_a$.

This gives another $r=n{-}1$ parameter family of mutually noncongruent examples of codimension $r$, distinct from the conjugacy classes.

Using the methods of exterior differential systems, one can show that, when $n=3$, these two families account for all of the codimension $2$ submanifolds of $\mathrm{SU}(3)$ with abelian normal bundle, in the sense that any connected submanifold $M^6\subset\mathrm{SU}(3)$ with abelian normal bundle is, up to ambient isometry, an open subset of one of the examples listed above. The argument that I have written out is a calculation using exterior differential systems and the moving frame, but, when I have time, I can sketch the proof, if there is interest.

Addendum 1: I had a flight with some time to look at the other two compact simple rank 2 groups. It turns out that all of the connected codimension two submanifolds with abelian normal bundle in $\mathrm{SO}(5)$ and $\mathrm{G}_2$ are (open subsets of) homogeneous compact ones as well. In each case, there is one additional $2$-parameter family of examples beyond the principal conjugacy classes.

First of all, a nice algebraic way to rephrase the condition that $\exp(N_pM)$ is contained in a flat immersed totally geodesic submanifold of $Q$ is to say that $N_pM$ is an abelian subspace of $\mathfrak{g} = \mathrm{Lie}(G)$. This follows from the standard correspondence between complete totally geodesic immersed submanifolds of $Q$ passing through $p$ and Lie triple systems in $\mathfrak{p}$ and the fact that flat such submanifolds correspond precisely to abelian Lie triple systems, i.e. just abelian subspaces of $\mathfrak{p}$. As noted in the comments, it is necessary for $M$ to be of codimension $\leqslant \mathrm{rk}(Q)$ if you want it to have an abelian normal bundle, simply by definition of the rank of a symmetric space.

Now, the question of abundance and classification of such submanifolds is difficult in general, but it becomes easier in case $M$ is homogeneous. Recall that $M$ is called homogeneous if the subgroup of $I(Q)$ of isometries preserving $M$ acts transitively on $M$. An equivalent definition as that $M$ is homogeneous if it is an orbit of a closed connected subgroup of $G$ (here we assume that $M$ is properly embedded and connected). If $M$ is homogeneous and has an abelian normal bundle, then it is an orbit (maybe singular) of a hyperpolar action on $Q$. Somewhat conversely, if $H$ is a closed connected subgroup of $G$ acting on $Q$ hyperpolarly, then any nonsingular orbit of $H$ ($=$ of the maximal dimension) has an abelian normal bundle. Recall that the action of $H$ on $Q$ is called polar if it admits a section, i.e. a complete immersed submanifold $S \subseteq Q$ that intersects all $H$-orbits and does so orthogonally. It is called hyperpolar if it is polar and admits a flat section. Sections are always totally geodesic and their dimension is equal to the cohomogeneity of the action. So if you have a hyperpolar action of cohomogeneity greater than one, its nonsingular orbits are examples of submanifolds of codimension $> 1$ with an abelian normal bundle.

Classification of polar and hyperpolar actions on symmetric spaces has a long history and is quite hard in general. When $Q$ is irreducible of compact type (in particular, when it is a simple compact Lie group), a classification was obtained by A. Kollross. He explicitly classified hyperpolar actions and their special case of actions of cohomogeneity one here and then, in a series of papers, he showed (together with A. Lytchak) that polar actions are automatically hyperpolar on such spaces. So what you need is hyperpolar actions in Kollross's classification whose cohomogeneity is greater than one in case $Q$ is a simple compact Lie group. This is discussed in Section 3 of his paper. If I'm not mistaken and got the paper correctly, in his notation (since $Q$ is a Lie group, he denotes it by $G$), every such action is orbit equivalent to the action of a subgroup $H \times K \subseteq G \times G = I^0(G)$, where $H$ and $K$ are as in the following tables 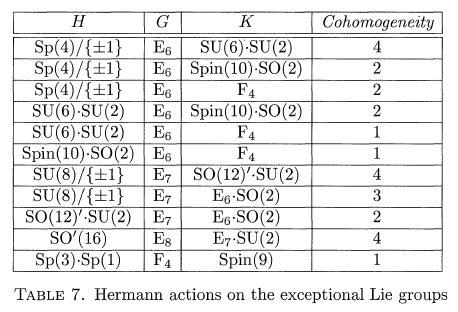 or the action of the isotropy subgroup $\Delta \subseteq G \times G$ at $e$ (i.e. the adjoint action of $G$ on itself; the cohomogeneity of this action equals the rank of $G$), or a so-called $\sigma$-action (whose construction is explained in the paper):

Let me finally remark that if you're interested in such submanifolds in symmetric spaces other than compact Lie groups, there are some classification results as well. In this paper Berndt, Tamaru, and Diaz-Ramos classified hyperpolar actions without singular orbits on symmetric spaces of noncompact type (possibly reducible). Since it is very easy to compute the cohomogeneity of the actions they construct, their result gives a wealth of examples of submanifolds of noncompact symmetric spaces with abelian normal bundles.

Not the answer you're looking for? Browse other questions tagged dg.differential-geometry lie-groups riemannian-geometry lie-algebras or ask your own question.