everyone. This is going to be a long question as it requires a good amount of back story in theory. This question is mostly along the lines: "I think this should happen, and I think my proof is right; but it seems off..." It has roughly to do with the Schwarz reflection principle, but it's a bit more nuanced.

To begin the question, it's helpful to remind the reader notation and subject content. As to the subject content, we're going to be talking about tetration. Now for the sake of this discussion we will say a tetration function is a function $F(s)$ which is holomorphic on some domain, in which,

There are many (and I repeat many) solutions to this equation; and we can always write $F(s+\theta(s))$ for a 1-periodic mapping $\theta$ and we have a new tetration function (albeit, perhaps on a different domain). The prototypical example of tetration is the Kneser tetration. For sake of this discussion,

Now this question doesn't have much to do with Kneser; which is a very difficult function to construct--I won't attempt to summarize. This question is about something different.

To do so, just take taylor series in a neighborhood of zero. This produces a recursive process for the Taylor coefficients at zero--the series converges up to $|w| < e^\lambda$. Then we can extend $g_\lambda$ using the functional equation to almost everywhere in $\mathbb{C}$, excluding singularities at $w = -e^{\lambda j}$ for $j\ge 1$. At $j=1$ we have a simple pole and $j>1$ we have essential singularities.

Now, we can write the function we actually care about,

Which satisfies the functional equation,

This means, for large values this function gets closer and closer to satisfying the inverse Abel equation:

This function has a period of $2\pi i/ \lambda$ and is holomorphic on the domain,

This means it's holomorphic in $s$ on an open cylinder $\mathbb{T}_\lambda \simeq \mathbb{C}/\mathbb{Z}$ for each $\lambda$. I stress that this is an open cylinder--which means it has all its poles on the boundary-line of the open cylinder--it looks like an open strip in $\mathbb{C}$. Now, none of this is causing me trouble yet. We can produce an error term,

Which means we can solve for the error between tetration, and our family of functions $\beta_\lambda$. And there exists a normalization constant (which means we just shift the variable forward), to get,

Now the subject of my research so far has been to construct a function comparable to Kneser (but I can't prove it's not Kneser, yet, which is more so the point of this question). We want a different tetration than Kneser--and we want it to have all the nice things Kneser has.

My solution is rather simple, if we write,

Now proving this converges is very difficult--and it took me about 50 pages. We don't need to worry about this to get to my question though. We, instead, want to find a work around. Now, to begin we have another normalization constant such that:

This normalization constant $x_\beta$ is dependent on how we take the limit--but they all produce the same $\beta$-method; upto normalization. The current goal is not to show this converges, but to show that it doesn't converge to Kneser's solution.

The standard criterion of Kneser is that,

Where $L$ is a fixed point of $e^z$--that is, $e^L = L$--and $L$ has the smallest imaginary part of all of $e^z$'s fixed points. The conjecture at hand I have (which is wildly supported by numerical evidence) is that,

Which means that the $\beta$-method, does not have normality as we increase the imaginary argument. Instead, we grow unbounded. Whereas Kneser has a nice decay to a fixed point as we increase the imaginary argument. The Kneser solution is uniquely defined off its domain and its decay at $\Im(z) = \infty$. For further reading on Kneser, if you are interested, I suggest William Paulsen and Samuel Cogwill's paper Solving $F(z+1) = b^{F(z)}$ in the complex plane. In this paper they cement a uniqueness criterion for Kneser.

And thus, [enters my question.]

I want to characterize these two functions using only the function $F_\lambda$. First of all, by a monodromy theorem (this is sort of the question, can the monodromy theorem be used like this) we can create a periodic function $\lambda^+$ which is holomorphic for $\Im(z) > 0$ such that,

Where as a Fourier series,

And that we have the reflection formula,

Which means once we hit the boundary of $\Re \lambda > 0$, we diverge to infinity. Now the goal of my analysis, is to show that Kneser's solution has the same kind of representation. In which,

Again, this function always exists by the monodromy theorem. But then the fourier series $\lambda^+ \neq \mu^+$, which is enough to say the $\beta$-method is not Kneser's method. And there is my question.

How well can I say this use of the monodromy theorem? I believe I get the exact monodromy theorem I want (which is as I writ); but I wonder if I need to weaken my conclusions. This argument is a tad out of my depth. I'm not the greatest at these kinds of topological (?) arguments.

Crucially here, we use the Schwarz reflection principle--which is why I labeled the question as such. This argument, as I know it, dates to Kneser. We have a function,

The main thing, making me scratch my head is that, should there be a stronger argument with Riemann mappings required? Or does this pretty much cover it?

It's important to note, that on a parallelogram (slice the strip in to shifts by one in the real argument), that $F_\lambda(s)$ has an essential singularity on its boundary, and so gets arbitrarily close to almost every complex number. So there is always existence of values. The derivative is also non singular,

I feel there needs to be a deeper argument made--but I can't quite think what it would be. I apologize if this question is a little open ended, but I've been stuck on this for a while now. And I'm not sure if that's a good enough sketch, or if I'm missing a crucial ingredient. It's difficult to find similar arguments, particularly with tetration--which is an enigma in most circles. 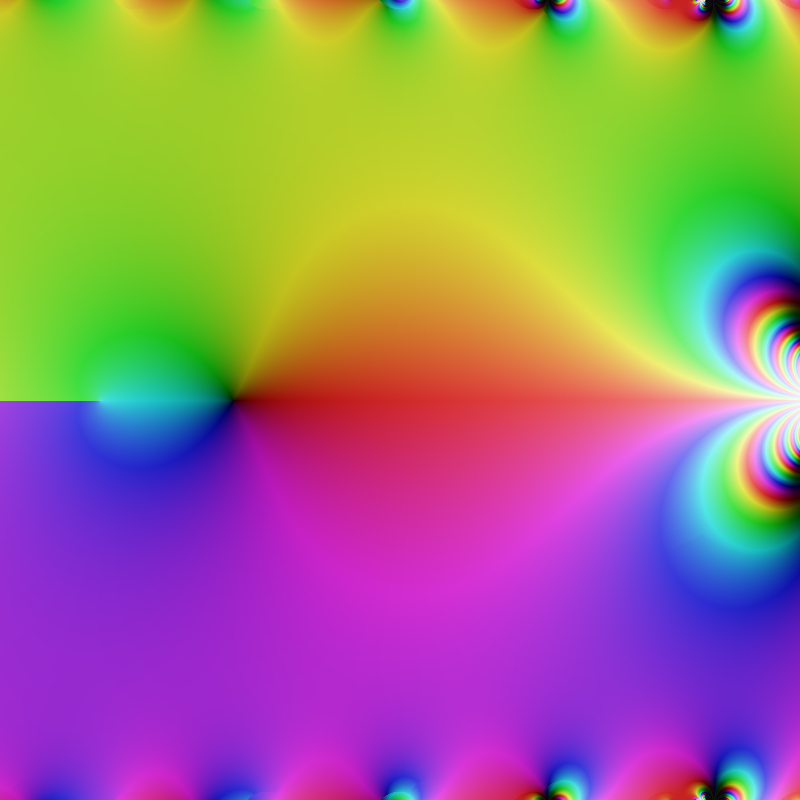 The tetrations with $\lambda \in \mathbb{R}^+$ look like this more or less, except the width of the strip changes. For complex $\lambda$ we get weirder graphs. Here's the graph over a similar domain with $F_{1+i}$--the strip starts to look a little slanted. 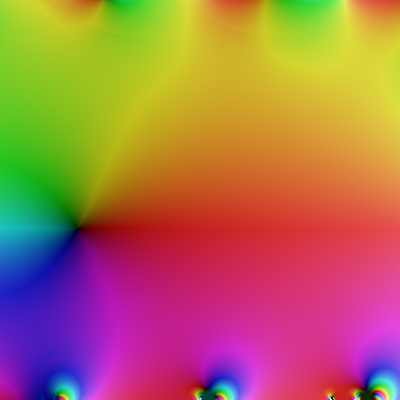 4
Integral representation of a limit
28
An explicit series representation for the analytic tetration with complex height
3
Reconstructing analytic tetration with a complex height from a thinner set of points
13
Is the exponential function the sole solution to these equations?
9
Is this Riccati equation ("Josephson junction") always phase-locked at integer rotation numbers?
1
On the relevance of the property $\exp^{\circ a}(\exp^{\circ b}(z))=\exp^{\circ a+b}(z)$ for the *fractional* iteration ("tetration")
2
Finding the repelling fixed point of an exponential, knowing only its attracting one
4
Borel summation and the Abel function of $e^z-1$
Question feed