The proofs without words post has some great entries. I'm interested in a similar concept: examples where a problem in math or physics is accompanied by a geometric figure that illuminates some key relationship in a way that formulas might not. These wouldn't be "proof by pictures," since they may not constitute a proof at all.

One example is the relationship between a quantity that varies inversely to the square of the distance to a source, and surface area of a sphere centered at the source. Such an illustration gives insight into gravity, for example; that it behaves as light intensity does. This is more significant than merely that "$g=mM/r^k$ for some $k$, and that $k$ happens to be $2$".

Another example is the integral over $\mathbb R$ of $1/(1+x^2)$ which is $\pi$. My first experience with this calc problem was as a child, watching the landscape from the window of a moving car on the highway. A tree, say 1 unit from the road, spins (relative to me, of course) at a rate of $1/(1+x^2)$ (where x is the position on the road), as can be seen from drawing a couple triangles. The total spin is $\pi$.

I suppose there are many examples similar to this second one from calc books (and many from complex analysis), but this one stuck out in my mind as being extremely simple geometrically.

I realize the question isn't precise, and most of math has some accompanying geometry. But I'd love to see other typical examples where people have found a geometric "explanation" extremely simple or crucial to an otherwise opaque problem.

You mentioned complex analysis. I find it is difficult to explain the Möbius transformation $$f(z) = \frac{a z + b}{c z + d} $$ without illustrating its effect on figures in the complex plane. A spectacular example is the award-winning video "Möbius Transformations Revealed," created by Douglas Arnold and Jonathan Rogness. 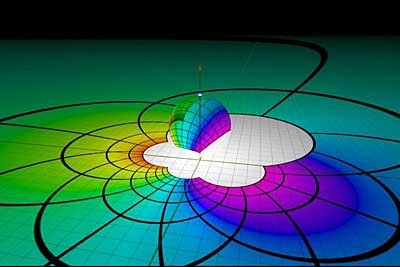 The chapter of the Dimensions video series about the Hopf fibration is really nice. It visualizes, that the quotient $S^1\backslash S^3$ is $S^2$.

Not the answer you're looking for? Browse other questions tagged geometry intuition examples or ask your own question.

12
Examples and intuition for arithmetic schemes
36
Canonical examples of algebraic structures
0
Intuitions/connections/examples for “eigen-*”
54
Examples of using physical intuition to solve math problems
5
Geometric interpretation of $BN$-pairs
68
What are some examples of ingenious, unexpected constructions?
8
Do you have examples of such “transitive” elements?
4
Very canonical constructions
Question feed