Explanation of perpendicularity of a Jacobian vector field

The claim is made in the proof of Gauss's Lemma.

I try to interpret what this means, but I am not sure - I only know the standard definition of isometry here, which makes sense locally in an open set or globally, but certainly not "at a point." Saying that $dE|_0$ is an isometry is also a bit unusual - we usually say that a map is an isometry, rather than the derivative of the map at a point is an isometry.

How to interpret the above claim $(*)$ made by the author properly? How can I prove the claim? Is the claim really obvious?

By the way, the "Gauss's lemma" mentioned in the notes is also a bit unusual - it is not about geodesics being perpendicular to a sphere.

(It seems some people find this question too elementary for MO, but I think there is a true difficulty in tracking the different objects in this subject and that answering such questions make MO more useful rather than less.) (Between writing this and finishing my answer, I spent a considerable amount of time, and I think it is far from an obvious question.)

First, there are things to be careful about with these notes. For example, the coordinates $(s,t)$ should be polar coordinates, even though it is not made explicit (otherwise, $t\mapsto E(s_0,t)$ would not usually be a geodesic when $s_0\neq 0$, and $J(0)$ would not be $0$ in general), but it seem at some points that we are assumed to think in Cartesian coordinates.

First, let us discuss the "isometric at a point" part. I like to draw differential geometry with colors. To represent $TM$ in 2D, I represent $M$ in 1D, like this: 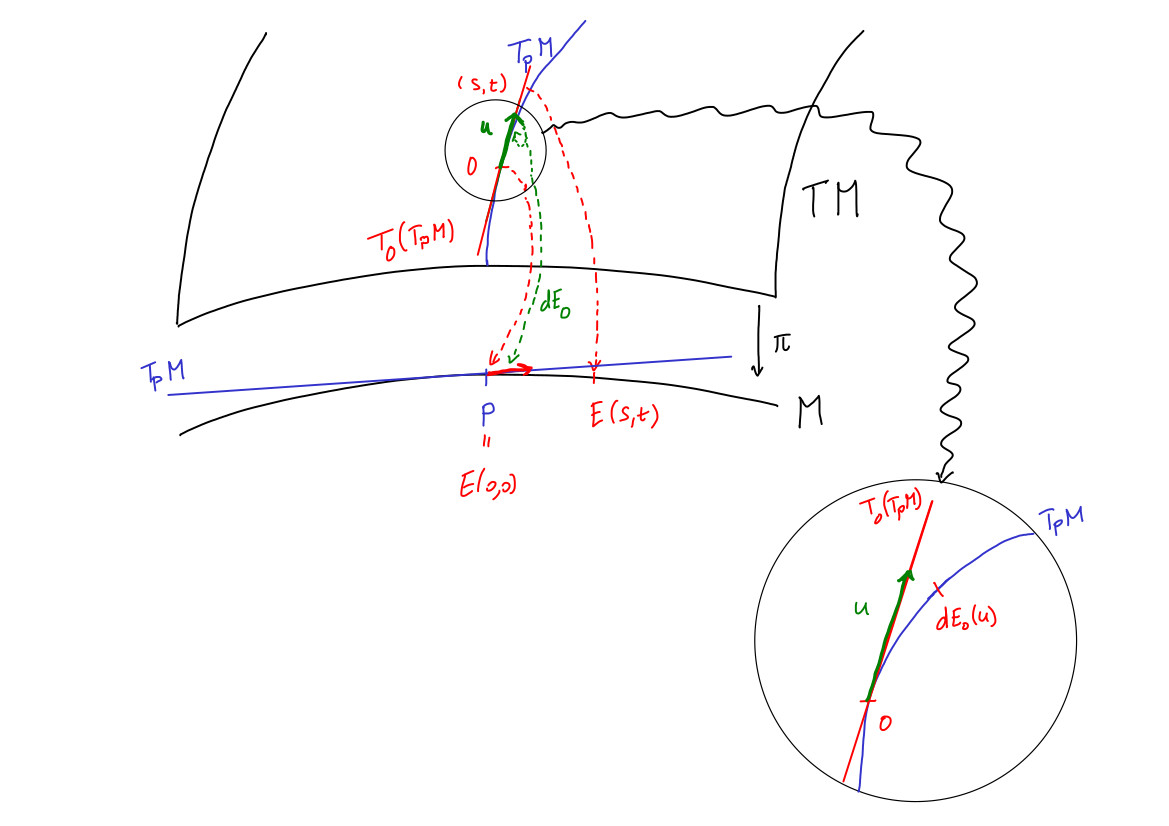 The mentioned expression is proved in 3.46; basically, it rests on uniqueness of Jacobi fields with specified initial value and derivative (standard second order ODE stuff), and observing that $t\mapsto E(tv)$ is a geodesic, so that varying $v$ makes a geodesic variation, whose derivative must be a Jacobi field.

Not the answer you're looking for? Browse other questions tagged dg.differential-geometry riemannian-geometry hyperbolic-geometry or ask your own question.

1
Properties of hypersurfaces in manifold of non-positive curvature.
18
Difference between parallel transport and derivative of the exponential map
6
Riemannian manifolds with small geodesics and bounded curvature
9
Is every open convex subset of a Riemannian manifold necessarily contractible?
19
Why doesn't this construction of the tangent space work for non-Riemannian metric manifolds?
1
$|sec_M| \leqslant C_1$, $|\nabla R|\leqslant C_2$, then frame bundle $|sec_{F(M)}|\leqslant C(C_1,C_2)$?
Question feed