Geometric interpretations of the exponential of entropy

and using (1), we may deduce (2) where equality is obtained when the Shannon entropy is maximised by the uniform distribution i.e. $\forall i, p_i = \frac{1}{n}$.

A remark on appropriate geometric embeddings:

If we consider that the Shannon entropy measures the quantity of hidden information in a stochastic system at the state $\vec{p} \in [0,1]^n$, we may define the level sets $\mathcal{L}_q$ in terms of the typical probability $q \in (0,1)$:

which allows us to define an equivalence relation over states $\vec{p} \in [0,1]^n$. Such a model is appropriate for events which may have $n$ distinct outcomes.

Now, we'll note that $e^{H(\vec{p})}$ has a natural interpretation as a measure of hidden information while $e^{-H(\vec{p})}$ may be interpreted as the typical probability of the state $\vec{p}$. Given (5), a natural relation between these measures may be found using the Hyperbolic identities:

where $2 \cdot \cosh(-\ln q)$ is the sum of these two measures and $2 \cdot \sinh(-\ln q)$ may be understood as their difference. This suggests that the level sets $\mathcal{L}_q$ have a natural Hyperbolic embedding in terms of Hyperbolic functions.

With apologies for promoting my own work, there's a whole book on the mathematics of the exponentials of various entropies:

You can download a free copy by clicking, although persons of taste will naturally want to grace their bookshelves with the bound work.

Diversity as the exponential of entropy

As Carlo Beenakker says, the exponential of entropy (Shannon or more generally Rényi) has long been used by ecologists to quantify biological diversity. One takes a community with $n$ species and writes $\mathbf{p} = (p_1, \ldots, p_n)$ for their relative abundances, so that $\sum p_i = 1$. Then $D_q(\mathbf{p})$, the exponential of the Rényi entropy of $\mathbf{p}$ of order $q \in [0, \infty]$, is a measure of the diversity of the community, or "effective number of species" in the community.

Ecologists call $D_q$ the Hill number of order $q$, after the ecologist Mark Hill, who introduced them in 1973 (acknowledging the prior work of Rényi). There is a precise mathematical sense in which the Hill numbers are the only well-behaved measures of diversity, at least if one is modelling an ecological community in this crude way. That's Theorem 7.4.3 of my book. I won't talk about that here.

Rather than picking one $q$ to work with, it's best to consider all of them. So, given an ecological community and its abundance distribution $\mathbf{p}$, we graph $D_q(\mathbf{p})$ against $q$. This is called the diversity profile of the community, and is quite informative. As Carlo says, different values of the parameter $q$ tell you different things about the community. Specifically, low values of $q$ pay close attention to rare species, and high values of $q$ ignore them.

For example, here's the diversity profile for the global community of great apes: 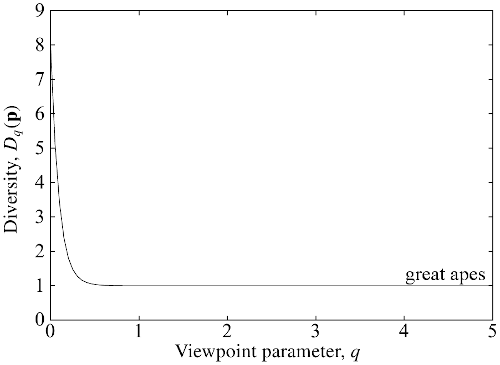 Maximum diversity as a geometric invariant

A major drawback of the Hill numbers is that they pay no attention to how similar or dissimilar the species may be. "Diversity" should depend on the degree of variation between the species, not just their abundances. Christina Cobbold and I found a natural generalization of the Hill numbers that factors this in — similarity-sensitive diversity measures.

I won't give the definition (see that last link or Chapter 6 of the book), but mathematically, this is basically a definition of the entropy or diversity of a probability distribution on a metric space. (As before, entropy is the log of diversity.) When all the distances are $\infty$, it reduces to the Rényi entropies/Hill numbers.

Let's think about maximum diversity. Given a list of species of known similarities to one another — or mathematically, given a metric space — one can ask what the maximum possible value of the diversity is, maximizing over all possible species distributions $\mathbf{p}$. In other words, what's the value of $$ \sup_{\mathbf{p}} D_q(\mathbf{p}), $$ where $D_q$ now denotes the similarity-sensitive (or metric-sensitive) diversity? Diversity is not usually maximized by the uniform distribution (e.g. see Example 6.3.1 in the book), so the question is not trivial.

What on earth is this invariant? There's a lot we don't yet know, but we do know that maximum diversity is closely related to some classical geometric invariants.

Although diversity is closely related to entropy, the diversity viewpoint really opens up new mathematical questions that you don't see from a purely information-theoretic standpoint. The mathematics of diversity is a rich, fertile and underexplored area, waiting for mathematicians to come along and explore it.

If I may broaden the question somewhat to include other interpretations of the exponential of entropy, it is commonly used in ecology to measure how many different species there are in a community. In that context one considers the generalized diversity index (or Hill number) $${}^q\!D=\left ( {\sum_{i} p_i^q} \right )^{1/(1-q)},$$ with the exponential of entropy being the $q\rightarrow 1$ limit,$^\ast$ $$\lim_{q\rightarrow 1} {}^q\!D=\exp\left(-\sum_{i} p_i\ln p_i\right).$$ The quantity ${}^1\!D=e^S$ is called the Shannon diversity.

Different values of $q$ correspond to different weights given to different species $i=1,2,\ldots$, dependent on their relative abundance $p_i$.

Not sure what you consider to be "geometric" in this context, but the exponential of the Shannon entropy is simply a measure of the "effective size of support" (ESS) of the underlying probability distribution. In classical mechanics, it is a measure of the hyper-volume of the reasonably probable part of phase space, and is independent of the choice of canonical phase space coordinates. In high energy physics, this is also closely related to the notion of the "emittance" of a particle beam in an accelerator or storage ring. In quantum mechanics, the exponential of the von Neumann entropy is, roughly speaking, equal to the number of accessible microstates, and is independent of the choice of basis. The logarithm is taken to (i) tame otherwise huge numbers, and more fundamentally, (ii) make the quantity additive over independent sub-systems.

With apologies also for promoting my own work, a colleague (Tim Hosgood) and I have recently published an article in Entropy, where we give a geometric interpretation for the exponentiated entropy of empirical distributions, namely as the length $L$ of a certain rectangle. What makes this rectangle interesting is that its width $W$ and area $A$ (from which you can calculate its length as $L=\frac{A}{W}$ and hence entropy as $H=\log(L)$) are additively and multiplicatively homomorphic in the original distribution.

10
The origin of the natural base in statistical mechanics
7
How to categorify entropy/perplexity?

14
Entropy of a measure
5
Upper bound on joint Renyi entropy
10
Subadditivity for Renyi entropies
3
Asymptotic formula for the number of connected graphs
19
information-theoretic derivation of the prime number theorem
3
Has the von Neumann entropy ever been used in classical mechanics?
10
The origin of the natural base in statistical mechanics
3
Kolmogorov's approach to probability theory
Question feed