What is the naming reason of poles in complex analysis?

The expressions “pole” and “polar singularity” were apparently first used in the 1865 book “Vorlesungen über Riemann’s Theorie der Abel’schen Integrale” of Carl Neumann (1832–1925): they are precisely the points that the function maps to the “pole” of the Riemann sphere. Neumann’s book, by the way, is also the first to develop the theory of the Riemann sphere, which Riemann himself had only presented in his lectures. (See Neuenschwander (1978) (...).)

The classification of the singularities of an algebraic function as poles and critical points was carried out, for example, in the Théorie des fonctions elliptiques of Briot and Bouquet (1875). However, the term “pole,” as pointed out by E. Neuenschwander (1978) was first used in this sense by K. Neumann in his Vorlesungen über Riemann’s Theorie der Abelschen Integrale (1865) in connection with the fact that the point at infinity was depicted as the pole of the sphere in this book.

The quoted article of Neuenschwander notes that the histories by Brill-Noether (1894, p. 170) and Osgood in the Encyklopädie (1901, p. 18) both miscredit Briot and Bouquet. So does (as of now) the earliest uses site — quoting an edition (1859) where the word pôle does not even appear.

I have wondered if Neumann was perhaps inspired by prior uses of “pole” for homographies or inversions, $$ f(z)=\frac{az+b}{cz+d}\qquad\text{or}\qquad f(z) = a+\frac k{\bar z-\bar a}, $$ (presumably then traceable to Stubbs, Chasles, Servois,...) but couldn't find solid evidence.

As Martin O remarks, the French word "pôle" (or the German "Pol") does not include the meaning "pillar", that's why the explanation "looks like a pillar" seems a bit dubious, at least to me.

Being a native German speaker, I have always associated the word "pole" to the electrical pole and thus to the function $\frac1{r^2}$. It seems entirely natural to me to use this special example as a prototype for any singularity of a (complex) function.

This may be apocryphal folk etymology, but I always thought it was because if you plot, or envision plotting, the surface z = |f(x + iy)|, at poles of f, the surface, if you imagine it sitting over the xy plane, looks like it is being supported by a really tall pole. Like a circus tent. I have no citations to support this belief, but I must have gotten it from somewhere. Anyway it makes a good deal of sense.

I'm posting this, despite not having an MO account, because genuinely can't understand why nobody has posted it yet. (Nikita's "because poles stick up" comes close, but seems to have been drowned out by posts about poles being "big", or invocations of the north pole, which seem to be entirely different explanations.)

According to these pages, the earliest known appearance of the term pole might be in "Théorie des fonctions elliptiques" (1875, p. 15) by Briot and Bouquet:

They don't provide any motivation for this choice of a term though.

By the way, in their first memoir on the subject, "Étude des fonctions d'une variable imaginaire" (1856), Briot and Bouquet refer to a pole of a function only as un infini du degré fini. 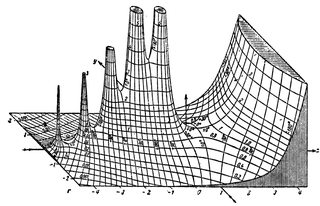 should make it clear why they are called poles.

Not the answer you're looking for? Browse other questions tagged cv.complex-variables ho.history-overview or ask your own question.

14
Terminology: Lost in translation or multiple-meanings