The mystery of the jumps of functions with the prescribed jumps: Eisenstein series and hidden symmetries(?)

Obviously, this holds for piecewise-constant functions with finitely many jumps: the sum is finite, and it indeed has jumps $j_k/C$ at points $t_k$, with $C=1$. This may be restated as: “the actual jumps” of the sum coincide with “the prescribed jumps” $j_k$. The same happens when the series converges absolutely (in particular, the sum is right- and left-continuous).

In general, without the condition of absolute convergence “everything may happen”. However, what I would never expect is an example of “a reasonable function” $f(t)$ for which the identity above holds with $C=½$. In other words: the actual jumps of the sum are twice the prescribed jumps.

I discovered such an example when examining plots of certain Fourier series appearing¹⁾ in the Artin case of the Langlands program. Question: are there other interesting cases when $C≠1$? Or other similar “pathologies”?

¹⁾ In fact, me considering this case was a result of misunderstanding on my part. (So I do not know whether this example is in the scope of the “real” Langlands program.) See my notes; search for all places mentioning Eisenstein.

This essentially ends my question. However, since the claim above about C=½ seems so incredible, below I provide the details of my example. — And this takes quite some space (sorry)!

(An impatient reader may want to jump to the picture below showing plots of two functions with “reasonably defined” jumps at disjoint subsets of ℚ.)

By the way: one can restate the question in terms of $\operatorname{d}f=f'(t)\operatorname{d}t$ — and then instead of $f$ “changing only by jumps” it is about “atomic” generalized functions, which are sums of shifts of atomic δ-measures. The advantage of this approach is that in our example $\operatorname{d}f$ is actually a boundary value of a modular 1-form, hence is a modular-invariant 1-form on ℝℙ¹.

My gut feeling is that appearance of “extra” coefficient 2 is due to “effects of a certain ‘hidden symmetry’”. One can notice that in our example $\operatorname{d}f$ has not only the modular symmetries, but also the “functional equation” symmetry $t ↦ -1/13t$. (It is not modular since there is no matrix in GL₂ℚ with determinant ±1 which matches this projective transformation.) Moreover, this symmetry exchanges differentials of two parts of $f$ considered below.

However, I cannot see how this symmetry may be explicitly related to the “extra” coefficient 2. I suspect a presence of “yet another discrete symmetry”…

Details of the example

The prescribed jumps are going to be $±1/Q$ at every (irreducible) rational $P/Q$. To explain the signs, recall that when working with modular forms and modular symbols²⁾, the simplest examples are Eisenstein series. At a real value $t$ of the argument, they may be written as $f(t) ≔ ∑_{r=0}^t J(r)$, with the summation running over rational numbers, and $J(P/Q)$ a certain function on ℚ. (Here and below for simplicity we take $t≥0$. Of course, there is an immediate generalization for $t<0$.)

²⁾ … which are antiderivatives of modular forms. These may be a little bit easier to work with than “proper” modular forms; indeed the latter ones are defined on $\{\operatorname{Im} z > 0\}$ and are too singular near ℝ; hence their restrictions to ℝ are “only” generalized functions. On the other hand, taking the antiderivative “mollifies” singularities, hence the restrictions of the antiderivative may be “smooth enough” to “almost” have values at points. (At least, in the cases we consider here they have left and right limits.)

Obviously: if the sum converges absolutely, then $f(t)$ has right and left limits, and its jump at $t=r$ is $J(r)$. For example, this happens if $J(P/Q)=B(P/Q)/Q^s$ with $s>2$ and $B(r)$ bounded (for this formula to make sense, assume $P$ and $Q$ coprime and $Q>0$). However, in many cases³⁾ the sum can be assigned a “reasonable” sense even if there is no absolute convergence. For example, one can sum first over rationals with denominator 1, then with 2, etc. — since this specifies an order of summation, one can ask whether the series converges or not.

Moreover, convergence means that in the sum, positive $J(r)$ “mostly compensate” negative $J(r)$: two sums over positives/negatives diverge, but taken together two speeds of divergence cancel each other. For example, if for fixed $Q$ one assigns $B(P/Q)$ randomly to be ±1 or 0 so that the frequency of $+1$ is the same as the frequency of $-1$, then $B(r)$ with the denominator $Q$ contribute (roughly speaking) $O(\sqrt Q)/Q^s$ into the sum. Hence the sum converges (almost surely) if $s>1$. (Such questions of probabilistic convergence are addressed by “Kolmogorov’s 2-series criterion”.)

In fact, if the cancellation in⁴⁾ $S(t,Q) ≔ ∑_{P=0}^{⌊tQ⌋} B(P/Q)$ is even stronger than for random $B$, then the sum may converge for $s=1$. And this is what happens for “Eisenstein series of weight 2 with quadratic character”.

⁴⁾ I abuse notations since the sum must skip $P$ not coprime with $Q$.

⁵⁾ Abuse of notation: for negative $c$, we should take the Kronecker symbol, not the Legendre one. So in the example we take $c>0$. 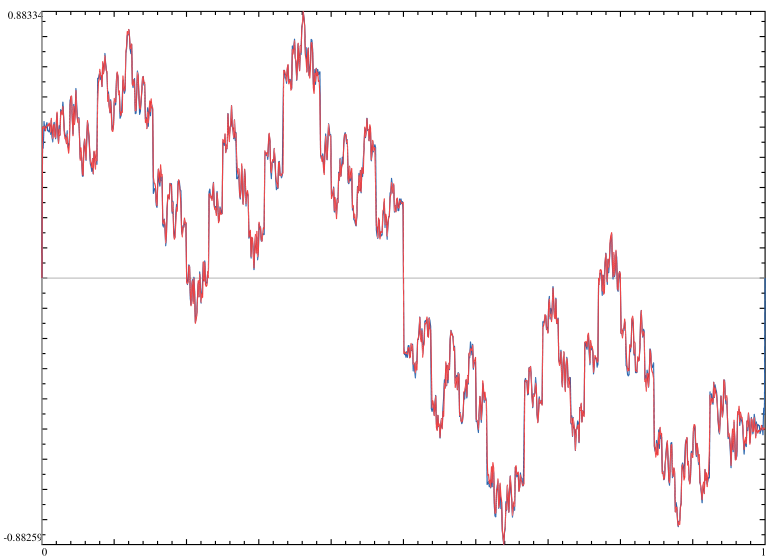 ⁶⁾ In fact, I cheated a bit: the first partial sum is taken with a certain regularization. (Details below.)

One can see that the blue plot has the prescribed jumps at $P/Q$ with $13|Q$, and the red one behaves likewise with $13∤Q$. However, otherwise the plots more or less coincide!

CONCLUSION: when $l→∞$, two parts of the sum coincide. Hence every part would have the jumps of both types. And the sum of these two parts would have twice the prescribed jumps! This finishes our example of how $C$ may be equal to ½.

(Well, the argument above only describes what happens. The details and proofs are in the paper linked to above. However, this is the case when having a proof does not bring any satisfaction — I still have no clue why this phenomenon appears…)

For completeness, I discuss a minor cheating used above.